Some wonder how war could happen in the 21st Century. But God never promised us infinite progress

Conflict shouldn’t surprise Christians. Jesus warned us that there would be trouble in this fallen world, but he also promised that he would overcome it, says Tim Farron 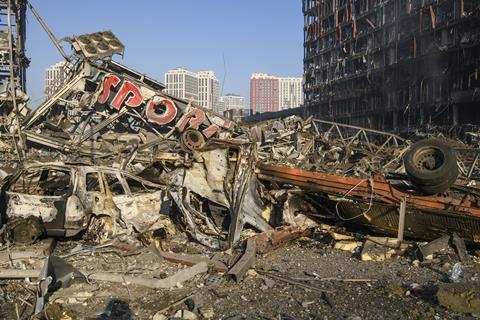 Destroyed shopping center in Kyiv, Ukraine, after it was hit in a Russian military strike this week

Possibly my favourite part of being an MP is visiting primary schools. We always have a question-and-answer session, and the wonderful thing about children is that they don’t know what they’re not meant to ask.

Last week, I visited Ambleside Primary School. It’s a fantastic school in a stunning location in the heart of the Lake District. It feels like the safest place on earth. The first question I was asked was how old my pet dogs are. But the bulk of the questions were about Ukraine. It was sobering to hear how much the invasion occupied the children’s thoughts. I got an overwhelming sense of their immense compassion for the people of Ukraine, their horror and anger at Putin, and their fear. It reminded me of the ever-present fear that I grew up under during the cold war, under the shadow of the bomb.

When I talk to adults about this crisis, they often ask: “How can this be happening in 2022? This is the 21st Century!” The assumption is that humanity should have progressed beyond horrors such as the war in Ukraine by now.

But this is a very Western viewpoint. Try telling people in Chechnya, Rwanda or Afghanistan that the 21st Century is no place for war! Try telling Christians in North Korea, Uighurs in China or religious minorities in Myanmar that 2022 is a time of peace and progress.

We have been comforted by peace across most of our continent for many decades. We have become self-satisfied and comfortable because war and persecution often happen a long way away from the UK. Each year, on Remembrance Sunday we say: “Never again!” Nobody under 40 even remembers the anxieties and uncertainties of the cold war.

Since 9/11 we have experienced the “war on terror”, which has certainly brought events closer to home. We’ve lived through terrorist attacks in UK cities, such as the 2005 bus and tube bombings in London and the Manchester Arena bombing in 2017, but we have experienced nothing like the sustained shelling of our cities by an aggressive military power.

Our response to distant wars in recent years is often limited to how we deal with the fallout of refugees arriving on our shores. We have become insular.

Francis Fukuyama spoke of the “end of history” with the fall of Soviet communism; and as huge technological advances have transformed society, we have continued to assume that progress is inevitable. Even the rise of populism and nationalism in Europe and the US has been seen by many liberals as a blip, and by those who are attracted by such ideologies as a way of regaining control from what they see as the failure of liberalism; a way of setting things back on ‘the right track’.

But God doesn’t promise progress in those terms. His kingdom advances most clearly where there is great hardship. He promises, ultimately, to set the world the right way up - which is a great hope - but he does not promise us a life of ease and plenty along the way.

Matthew 24:6 tells us to expect wars and rumours of wars, and the persecution of believers before the Son of Man returns. “See that you are not alarmed,” says Jesus. “These things must happen, but the end is still to come.”

The end of all evil, suffering, death, sadness and pain is still to come. But one day, it will all be over. There will be ultimate progress, but not yet.

In John 16:33, Jesus promises that “in this world you will have trouble.” Sin is in this world. People live for themselves, and not for the God who made them and who loves them. There is no less sin in the world now than during the wars of the 20th Century, so there is no reason to be surprised that such horrors still happen today. Why wouldn’t they? Humanity is still fallen. The myth of the inevitability of human progress is just that: a myth.

it is only God’s patience, graciously allowing time for more people to turn to him, that delays the end

But Jesus promises us more. He goes on to say, “take heart, I have overcome the world”.

I have overcome the world! What a claim! Jesus’ death on the cross looked like a disgraceful, shameful, final defeat, and yet it turned out to be the ultimate triumph. Evil’s grip was shattered and death was given a death sentence. Don’t we look at the images of suffering and wickedness on TV and yearn for that to be true? And it is true. Jesus tells us that it is only God’s patience, graciously allowing time for more people to turn to him, that delays the end.

The outrage in Ukraine shouldn’t be happening. Not because it’s the 21st Century, but because this is God’s world, and our God is righteous. He is not neutral about good and evil. Instead, he is all powerful and all good – and justice will be done.