Afghanistan is the deadliest place in the world to follow Jesus. Why is the media silent?

Since the creation of the World Watch List 30 years ago, North Korea has consistently topped the charts as the most dangerous country to be a Christian. But now it’s been overtaken by Afghanistan. And that is having repercussions around the globe, says Ben Cohen 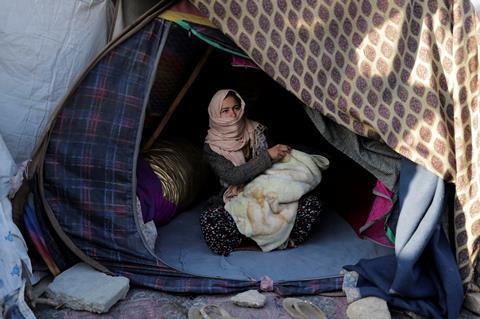 A displaced Afghan woman fleeing violence in the provinces

It’s official: Afghanistan is the worst place to follow Christ anywhere in the world.

I say “official”; I work for the Christian charity Open Doors, and we have made it our job to measure this, recording the oppression levels of Christians around the world for the last 30 years. The annual World Watch List is based on vast amounts of independently compiled, verified data of Christian persecution from across the globe.

For all of the time that we have been doing this, the number one position has been held by North Korea, where being discovered with a Bible almost certainly guarantees you and your family a lifetime’s incarceration in one of the country’s inhuman re-education camps - or immediate execution.

But now, Afghanistan has stolen the top spot - a substantial, and deeply shocking, achievement. Since the Taliban came to power last summer following America’s withdrawal, the situation for the thousands of hidden believers has become unspeakably grim. Christian men face almost certain death if their faith is discovered. Christian women may escape death but face imprisonment, or a forced marriage to an (often abusive) Muslim. Taliban fighters are actively tracking down Christians, even going door-to-door to find them.

When religious freedom dies, you can be sure other freedoms will follow

No wonder much of Afghanistan’s Christian population have fled across the borders. Although the welcome they will receive in neighbouring Iran or Pakistan, which are also in the World Watch List’s top ten themselves, is likely to be pretty chilly too. However, the implications of what happened last year goes much further than the Afghan border.

The Taliban takeover in Afghanistan has given a profound psychological boost to jihadists around the world. Al Qaeda congratulated the Taliban in an online statement. Thousands of Islamist extremists in Bangladesh praised the Taliban on Facebook. A Muslim cleric in that country recently told a Christian leader: “You see the situation in Afghanistan? One day it will be the same here.”

The message sent by the Taliban’s rise to power is troubling for Christians and other minorities around the world. Jihadists in sub-Saharan Africa see parallels with what has happened in Afghanistan and their own countries. Many now believe that victory is only a matter of time. There is a real risk that terrorist groups with links to the Taliban, such as the Indonesian Jemaah Islamiyah (which carried out the 2002 Bali bombings), may now become bolder as a result of the Taliban’s victory. Other Islamist groups, which until now had not considered seizing power by violence, could be created in Africa, with Afghanistan as their training base. Factions like Islamic State and Alliance of Democratic Forces now see their goal of an Islamic caliphate - once thwarted in Iraq and Syria – as achievable once more. The cost in human lives and misery is hard to overstate.

If that sounds alarmist, consider the following from this year’s World Watch List: the number of Christians recorded as having been killed because of their faith has risen a quarter on the previous year to nearly 6,000 – and this is a very conservative estimate. Of that number, nearly four fifths of these killings are in northern Nigeria, where Islamic extremist groups such as Boko Haram and Islamic State are running riot, laying waste to whole Christian villages. Along with the brutal murders and mass displacement of Christians, there is also a vast wave of kidnappings and horrendous sexual violence.

Meanwhile across West Africa, Islamic extremists are stretching their wings. Social order in Mali (number 24 on the list) is deteriorating fast. There are fears that it could become the ‘next Afghanistan’. Meanwhile, Islamist insurgents are spilling into neighbouring Niger and Burkina Faso. Further south, the Democratic Republic of Congo, plagued by the Alliance of Democratic Forces, and the Central African Republic have joined Nigeria in the top ten list for levels of violence.

And the fact that you hear little about this in the mainstream news is part of the problem. These extremist groups have a very specific aim: they want to form a caliphate: an ‘Islamic state’ where everyone is governed by their merciless interpretation of Islamic law. So-called Islamic State tried this in parts of Iraq and Syria and were thwarted. Now they believe they have a second chance to achieve their aims in Africa, as well as parts of Asia. And they believe the West barely knows - nor cares - that any of this is happening.

There are so many reasons for Christians to care about this. These are our brothers and sisters in Christ who are being murdered and uprooted from their homes. Religious freedom has been described as a “canary in the coal mine”. When it dies, you can be sure that other vital freedoms will follow in it’s wake.

This year, the world is a more hostile place towards Christians than it was last year. And, in turn, more hostile than the year before. This is the case not just in Africa, but from Latin America to China, from India to Malaysia. And it is not just bad news for Christians. It bodes ill for everyone’s freedom and safety in the years - and decades - to come.

Open Doors is hard at work, trying to raise the alarm as religious freedom and human rights are smothered. Make sure that your voice is heard along with ours as, together, we alert our leaders to the gravity of the situation.