If you want to know what’s going on in the UK Church, read Premier Christianity. We believe in connecting Christians to each other. We all know we have tribal tendencies – we attend conferences to hear speakers we agree with, we read books by the same speakers and we mix less and less with people who think differently. We don’t think it should be this way.

That’s why we seek to engage the breadth of the Church in the UK and beyond. Because we don’t believe that any one ‘tribe’ has the answer, and we have to keep talking to each other. To that end, you will find articles on theology, biblical interpretation, interviews, debates and changes and trends within the Church scene from a whole range of people.

But the magazine is not just about the Christian bubble. We have to do everything we can to connect to the world around us. The magazine tackles issues which affect the whole of society, including politics, international and current affairs. We also make sure we take a regular look at cultural trends – usually in music, books, films and TV programmes – looking for prevailing messages in our culture and how the Christian story can speak into them.

Finally, Premier Christianity is about helping you go deeper with God. The Christian life is not easy, but it is good. We want to help you through the difficult times and cheer you on in the good. We cover prayer, hearing from God, pastoral issues, spiritual disciplines…anything which we think might encourage your personal faith, and inspire you to bring the Kingdom of God to earth.

Because at the end of the day, that’s what we’re all here to do. 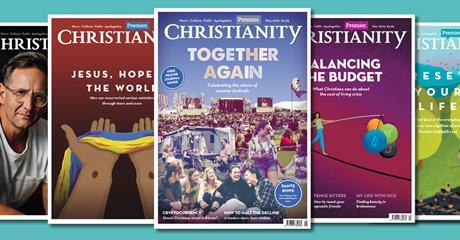 *UK only. But if you are not in the UK, don’t worry, there are offers for you too…

What others say about us

”Premier Christianity magazine does an amazing job of reflecting the UK Church in all its diversity. I value its commitment to seeking to break outside bubbles and push against becoming an echo chamber. It is an excellent publication, and I love that I can read stories, comments and opinions that I find challenging as well as those I agree with. Above all, it’s a great read and holds to the highest editorial standards - I’m proud to be associated with it.”

“Premier Christianity magazine is a vital servant of the church in the UK. With in-depth relevant reporting and analysis that is both fearless and compassionate, the magazine enquires, inspires, provokes and clarifies. I’m honoured to be associated with it, and have frequently pointed to it as a world leader in Christian publishing.”

“It’s the sheer variety that I like – the variety of styles – funny, serious, passionate; the variety of topics – world, church, culture. And all of it, marked by the courage to take on the tough questions with both generosity and a deep commitment to biblical truth.”

“The beauty of Premier Christianity magazine, is that it leaves us to make our own opinion. It signposts rather than enforces, it introduces us to current affairs with a gentle bias of the gospel. It is my go-to for a Christian perspective, without finger-pointing, or agenda. In short, it keeps us close to the simple gospel while the rest of the world, still tries to complicate it.”

“I find Premier Christianity magazine a fantastic way to stay informed with what is going on across the UK Church. Thanks to a great team of writers, reviewers and journalists this magazine is essential reading for Christians leaders who want to be up to date. With cultural comment, the latest reviews and in depth features there will always be something you enjoy in each month’s magazine. It’s one of the only regular pieces of mail I look forward to receiving.”

“Just a quick note from Canada to thank you for all you do to put these articles into readable form for us to digest and with which to be challenged! As one who believes the church has, for too long, felt constrained behind the moat of public disinterest, your writers are the shock troops of those willing to cross the drawbridge and engage the culture in ways with which the church has often felt threatened. Bravo!”

There have been many incarnations of Premier Christianity magazine.

It started life as a black and white newsletter called Buzz, formed by affiliates of the coffee house scene of the late 1960s.

By the 1980s, the title had changed to 21st Century Christian. In the 1990s, under a new title of Alpha, the magazine started to produce a supplement insert called Youthwork, aimed at youth leaders.

In 2014, the title was updated to its current form Premier Christianity.

Want to write for us? Please see here