MPs say China’s treatment of Uighurs is genocide. I couldn’t be prouder of them

As accusations of sleaze and political scandal continue to do the rounds, it is easy to become cynical. But when MPs stand up for persecuted people, we should be proud of them, says David Landrum. 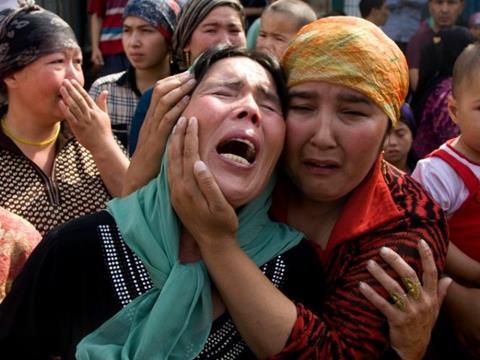 On Thursday night, MPs unanimously passed a motion to declare that China is committing genocide against its own Uighur people and other Turkic Muslims in its northwest Xinjiang province. In that moment, I felt genuinely proud of our nation’s politicians.

It is a non-binding vote and does not automatically change the way Britain will deal with China. However, the unanimous vote brought together MPs from across the political spectrum. As a symbolic gesture it is powerful, and it sends out a strong signal – genocide should never be tolerated.

You may well have seen the drone footage of kneeling figures being herded onto a train, or the BBCs shocking Panorama documentary How to Brainwash a Million People.

China’s Communist Party sees the largely Muslim Uighur people as a threat. Because of this, they have subjected them to an assault on their basic human rights. It is a litany of the most unspeakable treatment: mass surveillance and incarceration in ‘re-education camps’ where children are separated from parents and everyone faces murder, rape and forced sterilisation.

“Their goal is to destroy everyone,” Ziawudun, a former detainee told the BBC. “And everybody knows it.”

The treatment of is part of a wider picture of growing religious intolerance across China and is something that should chill all of us to the bone.

Their goal is to destroy everyone

It is tough to know where to begin when describing the ways that the Chinese Communist Party are oppressing its Christian population. Churches are being burned down and bulldozed, increasing numbers of Christians are being imprisoned or “re-educated”. Surveillance culture means that believers are being tracked on their mobile phones and logged on facial recognition software when they attend church.

This year we learned that an official textbook rewrote the Bible story of Jesus and the woman found in adultery. In the revised version, Jesus stones the woman, saying “I too am a sinner.”

Daring to speak the ‘g’ word

To declare that a nation is committing genocide is no small thing. Genocide is the deliberate act of killing large numbers of a particular race, nation or ethnic group with the intention of wiping out the entire people group. It is a major claim to make and should have serious implications in our dealings with the nation involved.

If it becomes official policy that China is committing genocide, we cannot continue our current trading, or even political relationship. There are a few targeted sanctions already, but once we agree that genocide is taking place, everything changes.

The USA and Canada have already used the term in relation to China’s treatment of the Uighers. Now, concerted international agreement is needed and the ruling of an international court. The Chinese Communist Party are blocking all attempts to visit the area in Xinjiang where this is said to be happening. They know that their economic future could face serious damage if they were tried and found guilty.

There is a growing body of MPs saying that standing up to genocide is now non-negotiable. Led by Lord Alton, among others, we have been fighting for this recognition in parliament.

It would be a huge step to boycott trade with China. You may well be reading this very article on a laptop, phone or tablet manufactured there. However, the spectre of genocide is rearing its head elsewhere around the world and a strong message needs to be sent to those condoning it.

Last year, hundreds of thousands of minority Christians in northern Nigeria were driven from their homes by Islamic radicals. Thousands were murdered. In India, senior Hindu nationalists have been boasting of a campaign to remove all non-indigenous religions from the nation by the end of this year – including Christians and Muslims.

The tide is turning, and the world is waking up to a scandal of monumental proportions. At Open Doors, we are pushing for the following actions:

We need to understand the centrality of freedom of religion as the basis from which all our other human rights and civil liberties spring, and stand up for it accordingly.

Thursday’s vote was an historic moment. It is time, as a parliament and as a nation, that we reset our moral compass and made a stand.

Dr David Landrum is the Head of Advocacy and Public Affairs for Open Doors UK & Ireland. Learn more about their advocacy work and find out how you can add your voice.