I was bombed in the Falklands war, but God miraculously saved me

The Falklands war ended 40 years ago today. But for Steve Jones, whose life was miraculously saved during a bombing raid on Ajax Bay during the conflict, it was just the start of his faith journey 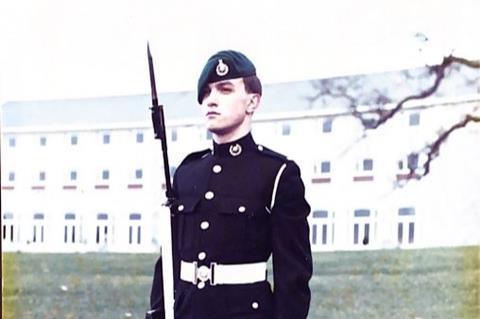 Steve Jones was just 16 years old he joined the Royal Marines. The following year, Argentina invaded the Falkland Islands, a remote British colony in the South Atlantic. Just three days after qualifying as a signaler and arriving at his unit in Plymouth, Commando Logistic Regiment was sent as part of the UK’s Task Force to retake the islands. Steve and his regiment sailed off to war, headed for Ajax Bay. Here, he tells his story:

When we were embedded at Ajax Bay, there was one particular day - the 27th of May 1982 – and I was on radio watch in the command centre. Because I was decoding a message, I was late going off a radio watch. It was about 5:30pm and when I finished decoding the message, I went to the galley to see if there was any food left. Everybody else was gone, the meal was over, but the cooks were there and my friend, Sparrow. I was stood outside, eating, when I heard gunfire coming from my left. Maybe a quarter of a mile away, I could see Major Terry Knight, who was a second in command of our unit, firing his rifle into the air. I thought to myself: What is he doing? Is he playing at being John Wayne? But as I looked, I saw two Argentinian Skyhawk jets come over the horizon, heading directly for us. And I knew it was warning; there was an air attack coming.

There was no air raid warning; they had taken us by surprise and I was completely on my own. I started running back towards the galley – it looked like the strongest building about. So I’m running at full pelt and, suddenly, while I’m in full stride, I literally felt myself grabbed by an unseen force, turned 90 degrees to my left and propelled in that direction. As I looked up, the nearest of the jet was coming at me, it’s underbelly cannon firing and chewing up the ground with bullets. I remember seeing it release a big, black bomb, around 500 pounds, it’s parachute snapping out behind it. And I just thought: I’m dead. It’s all over. It was so low, I could virtually reach up and touch that jet.

I was untouched. It literally felt as if somebody was laying on top of me and shielding me

Somehow, I managed to stay on my feet. In front of me was a bunker and a friend of mine, Colin, was trying to get in. There seemed to be other people in there but there was plainly no way I was going to make it, so I threw myself down on the outside of the bunker, completely exposed, and just put my hands on the back of my neck to try and protect my head. The bomb landed right in the part of the building that I had been running to, and killed my friend Sparrow who had just fed me dinner. When that bomb went off, it sucked all of the air out of my lungs but, somehow, it didn’t damage them. I felt the terrible force of the explosion. And when I shook myself to, Colin was very tragically dead next to me. He had died instantly. But, other than tiny bits of shrapnel in the back of my hands, I was untouched. It literally felt as if somebody was laying on top of me and shielding me.

Ten minutes later, there was another air raid warning. I rushed into another bunker and, alone, I cried out to God. I knew that the Bible was true, there had to be more to life than this. With my limited knowledge and understanding, I called out to God and God saved my life and my eternity. In total, eight British servicemen died that day in the attacks on Ajax Bay.

I have spent the rest of my life trying to find out why God saved me that day. After leaving the Royal Marines, I became a police officer, and then went to university and read law, becoming a barrister for 14 years. When I felt called into ministry, I went to America for two and a half years, working as a Baptist minister, before coming back to the UK for three years to plant a church. After returning to America for a second time, and spending another eight years as a Baptist minister, God called me back to the UK. I am now a vicar, serving God in Exmouth, Devon. My current mission community includes the Royal Marines training base at Lympstone. The 40th anniversary of the end of the Falklands war is a time of deep reflection for me.

I recently found out the name of the pilot who bombed me and killed my friends. It makes the issue of forgiveness live and very vivid, however, God’s amazing grace is sufficient, and his love overcomes all things.

I literally felt myself grabbed by an unseen force, turned 90 degrees and propelled in a different direction

The events of May 27th 1982 resolved, for me, the question of whether there was a supernatural realm forever. I know God is real and I’ve spent the rest of my life walking in faith, trying to see God in everything and being amazed at his miraculous power in so many ways. I hope that you have also had an experience of God, who is real and powerful. If you haven’t, or if you’re not sure he’s there, I encourage you keep seeking him. It says in Jeremiah 29:13: “If you seek me with all your heart, you will find me, says the Lord.”

To commemorate the 40th anniversary of the Falklands War, and to mark the start of Armed Forces week, there will be a service at St Andrew’s Church, Plymouth, on Sunday 19 June at 3pm, led by the Bishop of Plymouth

Steve JonesRev Steve Jones is a former Royal Marine and served in the Falklands war conflict. After leaving the forces, he worked as a police officer and a barrister before joining the ministry. He has served in both the UK and the USA and is now Team Rector of Exmouth, Littleham and Lympstone parish in Devon.