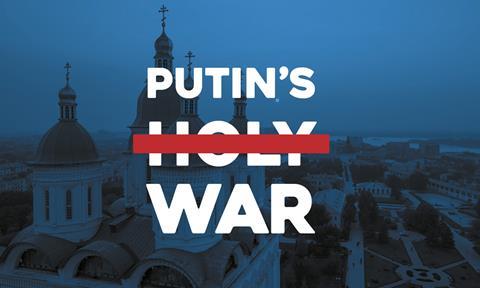 Justin Brierley (JB): Can you fill us in on some of the religious history that informs this particular war, Fr Cyril? 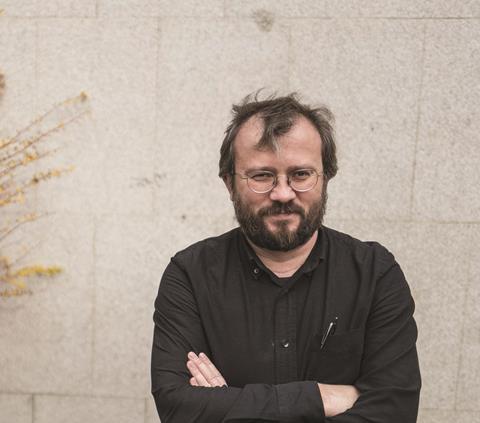 Fr Cyril Hovorun is a professor of ecclesiology, international relations and ecumenism at University College Stockholm. He is originally from Ukraine and has studied at the theological seminary in Kyiv, the University of Athens and Durham University.

Fr Cyril Hovorun (CH): It is quite clear that Putin is obsessed and possessed by the idea of taking Ukraine. It’s irrational: he destroys his own country for the sake of retaking Ukraine, which is looking increasingly unlikely. One can explain this behaviour only when one takes into consideration the non-rational, non-secular dimension.

From a secular perspective, Putin is indecipherable and unpredictable. That’s what has puzzled many Western leaders, I think, because they cannot read his mind. They perceive him as one of themselves: a secular leader with a pragmatic approach to things, but he is not. He is driven by a sort of metaphysics. I would not call it religion, although there is a component of traditional Christianity in it. It’s really a sort of metaphysical outlook, which I believe to be dangerous.

His career in the KGB changed when the Soviet Union collapsed. It seems that he got disappointed with the communist ideology and became some kind of non-ideological personality. He had some experience of conversion, but I would argue that the sort of religion or metaphysics he converted to reflects late Soviet religiosity much better than traditional Christianity. This post-Soviet sort of religiosity is very simplistic. Just like Dietrich Bonhoeffer talked of cheap grace, I would say Putin has adopted cheap spirituality. It’s ritualistic, it’s superstitious. He seems to be very much into numerology; he started his campaign against Georgia on 08.08.08. And the first troops were brought to Ukraine from the eastern borders on the 22.02.22. So this kind of crazy numerology is very much embedded, it seems, in his spirituality. Also, he consults spiritual charlatans who are not priests or traditional Christians. It’s a mix of post-Soviet metaphysics, superstition and, I would call it, a dualistic worldview. There is a part of the world which is good, and he believes this is Russia, and then there is a part of the world which is bad, and he believes this is the West.

AT SOME POINT, THERE WAS A CONVERGENCE OF RHETORICS OF THE CHURCH AND OF THE KREMLIN

What he does in Ukraine is not just about Ukraine, it’s actually about conquering the West; he wants to destroy it through Ukraine, which is used as a proxy. We should remember as well the other crimes against humanity: the poisonings in Salisbury, the interventions into the American election process, and so forth. For Putin, it’s a global campaign; a cosmic task, I would say. Yes, he is a madman, but he is a calculating personality driven by the kind of worldview I have described.

JB: Clifford, can you add a bit of the history, because I think it will help us to get a sense of what Putin had in mind when he launched this invasion? 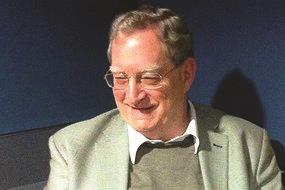 Clifford Longley is a Catholicauthor, broadcaster and journalist who specialises in British and international religious affairs. He wrote a weekly column in The Times for 20 years and is currently a columnist for The Tablet. He is a regular contributor to Radio 4’s The Moral Maze and Thought for the Day.

Clifford Longley (CL): A key phrase here is ‘Holy Rus’, and its centre was Kyiv for a long time, which is why Kyiv is still so important to Putin now. In other words, Moscow was a suburb of Kyiv, rather than the other way around. (I’m not sure Moscow even existed 1,000 years ago, to be honest with you.) So it’s steeped in that kind of history – it was a unified entity. And I think Fr Cyril is quite right to say “metaphysical”. I would even say it’s a mystical notion: the three parts of Holy Rus being Belarus, Ukraine and Russia, and they were ruled by the Tsar, who had a special duty from God to protect it from its enemies. Its enemies were to the west, and indeed, to some extent, its enemies were Catholic. There was a lot of tension between the Poles and Lithuanians who were, historically speaking, Catholic nations. They were regarded as the embodiment of what was threatening Holy Rus. There have been wars, the territorial boundaries have changed – shifted here and there – and indeed shifted again after the second world war, but basically the idea is that there is a holy space – whose soil is holy, whose people are holy and whose Church is holy – and they’re unified under the Moscow Patriarchate.

Now, the interesting question is: to what extent does this metaphysical ideology of Putin chime with the understanding of the Russian Orthodox Church Moscow Patriarchate? I know we can find remarks by Moscow Patriarch spokespeople saying that there is such a thing as Holy Rus and it ought to be protected from its enemies, but I don’t know that the whole package you so eloquently described, Cyril, is subscribed to by [the head of the Russian Orthodox Church] Patriarch Kirill.

CH: I mentioned that Putin was disappointed when he left the [Communist] party. He became disappointed in communist ideology and in any ideology, and for a long time he remained, I would say, a non-ideological person. Even when he became the president in 2000, I don’t believe he really aligned with any ideology. But what happened then, was that there was an offer from the Russian Church; an offer of a sort of ideology to substitute the communist ideology. This ideology was designed from the beginning by the Russian Church…although it’s more appropriate to call it mythology. And it was exactly this idea of the Holy Rus, as mentioned by Clifford, and the idea of the sacred space to be protected. The Russian Church, and particularly Patriarch Kirill himself, are the authors of this ideology. And the Russian Church managed to ‘sell’ this ideology to the Kremlin and the Kremlin adopted it. 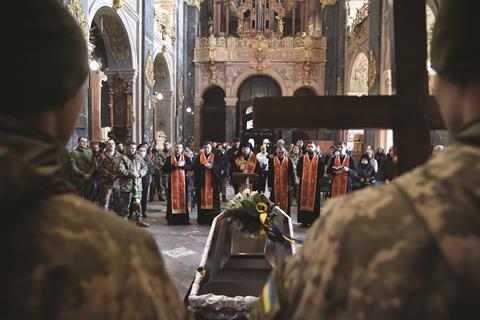 Members of the military attend the funeral ceremony of Major Ivan Skrypnyk, who died as a result of a Russian missile attack on a Ukrainian military base in Western Ukraine

I remember very well, because I worked in Moscow at the time, the moment the Kremlin adopted the language of the Church in describing its political goals. There was a convergence of rhetorics, of the Church and of the Kremlin, with the Church playing the leading role in producing this rhetoric. When I listened to Putin, just before he launched his attacks against Ukraine, I heard the voice of the Church: the argumentation, the tropes. And if we come back to 2014 when Crimea was annexed and Putin sent his proxy troops to the Donbas area, many came to fight in the east of Ukraine with the idea that they were protecting the sacred space of Holy Rus, and they were fighting against the godless, demonic, diabolic West. And that idea was inspired, I’m afraid, by the Church.

JUST LIKE DIETRICH BONHOEFFER TALKED OF CHEAP GRACE, I WOULD SAY PUTIN HAS ADOPTED CHEAP SPIRITUALITY

JB: Fr Cyril, do you think at this point, Kirill, the Moscow Patriarch, is actually endorsing and encouraging this war in Ukraine?

CH: I’m sure about it. Unfortunately.

JB: There is a narrative that says religion is responsible for many wars. What’s your response, as a Christian, to the fact that these religious tensions have, to some extent, contributed to this war in Ukraine?

CH: I believe the opposite. That the lack of religion contributed to this war. Putin’s atheist background, his secularist background and his wrong education in religion made this war possible. Just like during the 20th Century when the Great War and the second world war occurred because of increasing secularisation – they were not religious wars, they were the wars of secularised ideologies like communism, nazism and fascism. So I think it is not completely correct or helpful to consider this conflict as instigated or inspired by religion. The war is underpinned by a wrong understanding of religion or by abuses of religion.

This conversation was first broadcast on Premier Christian Radio’s Unbelievable? as ‘The religious roots of Putin’s invasion’. To hear it in full, download the podcast or watch online at youtube.com/unbelievableshow