Walking away from our hardline commitments to defence spending is unholy. Ukraine needs us

If supporting Ukraine in the face of Russian aggression is just, Christians must also back an adequately-funded military, argues George Pitcher. Especially in the face of potential escalation 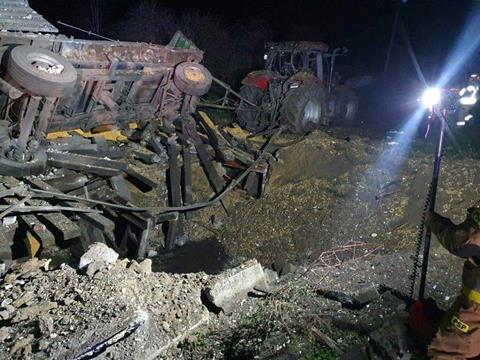 Damage after an explosion in Przewodow, Poland near the border with Ukraine, Nov 2022

The dreadful missile explosion in Poland remains eerily resonant of the coming of war. Maybe it’s to do with the geography. It was Nazi Germany’s invasion of Poland on 1 September 1939 – and refusal to withdraw – that pulled the trigger on Britain’s declaration of war.

Never mind that this latest Polish tragedy may turn out to have been a wayward Ukrainian missile – or perhaps, far more ominously, even a ‘false flag’ strike. There’s still something about the two civilian deaths in Poland this week that chillingly remind us of the words ascribed to Josef Stalin: the death of one man is a tragedy; the death of a million is a statistic.

You don’t have to be an alarmist to feel that an atmosphere of casual disbelief pertains that widespread war in Europe may be coming once more. Listen to the words used by the aggressor. Russia’s Vladimir Putin claims his invasion of Ukraine was to protect ethnic Russians living there. He has accused Western nations generally, and NATO in particular, of conspiring with Ukraine against Russia.

In 1939, Adolf Hitler accused Poland of persecuting ethnic Germans living there, and claimed Britain and France were planning, with the Poles, to dismember Germany.

Whatever the truth behind the spread of mortal violence to Polish soil, we’re asked once again to examine what it would take to square up to Russia in a military confrontation, should that conflict spread. And we need to examine how those decisions would need to be made through the prism of our Christian faith.

Christians are permitted to go to war in a just cause, though no longer – thank heaven – in the cause of propagating the gospel, in the sort of grotesque militaristic imagery encapsulated in the hymn ‘Onward Christian soldiers’. The Catechism of the Catholic Church notes the fifth commandment – “Thou shalt not kill” – and the consequent imperative to “free us from the ancient bondage of war”. But it goes on to acknowledge that “governments cannot be denied the right of lawful self-defence, once all peace efforts have failed.”

The Catechism, which is the most explicit Church source of the strict conditions for legitimate use of military force, lists four conditions that must be satisfied for the moral legitimacy of war. It would be cowardly now not to apply them to Putin’s war in Ukraine – and tick the boxes that apply.

The second is that “all other means of putting an end to it must have been shown to be impractical or ineffective.” Economic sanctions against Russia have only invited retaliatory action, which has arguably inflicted greater harm on NATO members. Meanwhile, arming Ukrainians has been effective – though half-hearted on the part of some nations, such as Germany – but only serves to show that military support for Ukraine is worthwhile, rather as Britain demonstrated its defence effectively to the USA in the world war two. Tick.

Thirdly, “there must be serious prospects of success.” Ukraine, amazingly, has liberated the city of Kherson from Russian occupation. Russia may be a nuclear power but, with its second-rate equipment and demoralised, conscript army, it is no superpower. Tick.

Finally, “the use of arms must not produce evils and disorders graver than the evil to be eliminated.” The Catechism notes that “the power of modern means of destruction weighs very heavily in evaluating this condition.” The gravest fear here must be nuclear escalation and consequent Russian and NATO civilian annihilation. But there is no sign of Putin backing down. His enraged missile strikes against Ukraine this week demonstrate that he must be stopped before he is tempted by nuclear strikes. Reluctantly: Tick.

The concept of the Just War has been around since Augustine argued that God has given the sword to those in authority for good reason (Romans 13:4) and Aquinas argued that it depended on virtuous sovereigns, causes and intents. We should not, as disciples, shy away from the prospect of serving the gospel by standing in military solidarity with the victims of tyrannical oppression.

That may sound theologically hawkish. If so, it could be countered by economic doves. Decades of British defence cuts have undermined the UK’s ability to protect the vulnerable. Ben Wallace has now had to walk away from the hardline commitments of former prime ministers Boris Johnson and Liz Truss to maintain defence spending as a fixed proportion of GDP (gross domestic product).

If a war in Europe ticks all the moral boxes, defence should be recategorised as a sustainable industry. To run it down, financially or critically, may not only be immoral, but unholy too.