5 ways to defeat Putin’s plans without leaving your laptop

We are increasingly living in a ‘splinternet’, where citizens in countries like Russia, China and Iran are fed a completely different reality to the one we are presented with. Here’s how Christians can make a difference 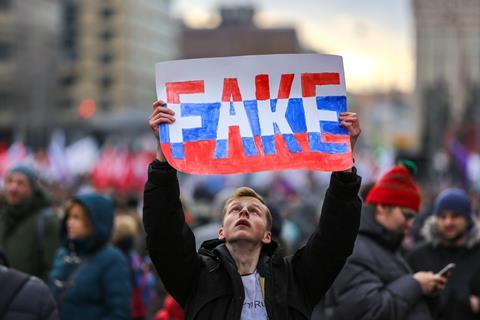 Imagine being caught in the middle of the Russian invasion of Ukraine, seeing homes destroyed and friends killed in cold blood. You speak to your mother and father back in Russia and they simply don’t believe what you tell them you’ve seen. They have been told that Russian troops are conducting a largely peaceful “special operation” to root out Ukrainian “Nazis”. The Russian media, almost totally controlled by the Kremlin, has blocked pretty much any news outlet that could offer an alternative narrative.

Welcome to Putin’s online war. It didn’t begin with Russia’s invasion of Ukraine, and it’s not only being waged by Putin. The chances are that you have already been caught up in this very modern form of warfare. It’s an online battle, not just for our hearts and minds, but for the souls of our nation - not to mention the religious freedoms of countless millions.

But here are five ways you can fight back:

You already know that this is largely pointless anyway, at least in theory, but what if I told you that it is also exactly what the likes of Putin and Chinese president, Xi Jinping, want you to do?

You may well have heard of the Russian disinformation bots. You will find them in Twitter spats, fanning the flames of the disagreements – a cursory look at their profiles will show they usually have no more than two or three followers and post nothing noteworthy or original themselves.

Some have argued that Russia promoted Brexit or Donald Trump’s election. But what is far more important to the bots is that we disagree angrily and tear ourselves apart over the subject. When Putin namechecked the ‘cancelling’ of JK Rowling, you could see him openly mocking the kind of cultural divide that his troll army were already happily encouraging.

As Dr Pete Phillips, Premier’s Head of Digital Theology explains: “If you can divide your enemy, then you’ve got more control over them; you can use those divisions to push people apart. It’s saying, ‘How can we disrupt this society and get them to look at their own problems rather than bothering with what Russia’s doing over in Ukraine or Georgia?’”

As I researched this piece, I saw the terrible satellite photographs showing men and women bound and shot dead on the streets of Bucha, a town north of Kyiv. One day later and I am seeing a few Twitter users from the UK suggesting it was all staged by Ukrainian forces – an explanation that comes straight from Moscow’s denials. You can be sure that Russian bots and computer algorithms will be amplifying those Western voices that agree with them. In the same way, China’s internet army are happy to amplify theories that Covid-19 was, in fact, developed by the US military.

However, misinformation and conspiracy theories aren’t just used for deflecting blame. Just like online culture wars, misinformation can divide and weaken whole nations. They can even cost lives - as the storming of the US Capitol building in 2021 showed. The cluster of conspiracies known as QAnon, which fuelled the takeover, were repeatedly shared by Russian and Chinese bots using Artificial Intelligence. QAnon didn’t originate in either China or Russia, however their cyber systems are primed to seek out such divisive misinformation and amplify it at every opportunity, across the internet.

3. Show the tech giants that you care

Recently Open Doors, a Christian charity which supports persecuted Christians around the world, reported how apps for The Bible and the Quran were taken down from China’s app store. However, it wasn’t China itself that took the apps down, explains Sam Brownback, former US Ambassador for Religious Freedom: “It was Apple, following Communist Party instructions. Companies will lose their access to the Chinese market if they act otherwise.”

And there’s the rub, as Shakespeare would say. As Christians, are we prepared to forgo the latest iPhone (or other shiny toy) when tech giants bow to the wishes of a totalitarian state? Would we boycott an airline when it offers online bookings for flights to Taiwan under its ‘China’ dropdown menu, rather than listing it as a country in it’s own right? These are the everyday choices we face as Christians and consumers. The industry giants aren’t completely deaf to our voices, as the recent boycott of so many companies from Russia shows. When the photos of the ‘tank man’, who stood unarmed in front of Chinese tanks in Tiananmen Square during the quashed 1989 demonstrations, mysteriously disappeared from Bing’s search results on the anniversary in 2021, there was an outcry. Microsoft blamed a bug, and the photo was (eventually) reinstated.

One place you will not see Tiananmen Square’s tank man online is in China itself. The 1.4 billion citizens effectively reside inside an internet bubble where outside news and social media is largely filtered out – Facebook and Twitter were banned in 2009, Instagram in 2014. You also won’t see mention of the detention camps that China’s Uyghur population are forced to live in – something described as genocide by a UK tribunal but known to few Chinese citizens outside of Xinjiang Province, where it is taking place. Russia is also closing itself off from the outside world as the Ukraine conflict continues. Myanmar, Turkmenistan, Iran, Indonesia, and several other nations, have similar filters in place. Many are jealously watching China’s next-level surveillance in Xinjiang.

However, just like Brother Andrew was able to smuggle Bibles into China, there are ways of reaching across the great firewall of China, Russia or Iran. One recent tactic, recalls Phillips, has been writing online reviews for Russian restaurants: “They would say ‘thank you very much for a lovely meal’. And when the owner asks, ‘when did you come here?’ they respond ‘Well, no, we didn’t because of the war in Ukraine; do you know what’s happening over there?’” There are ways of reaching through the firewall and divides, but they require ingenuity and patience.

As our years spent on social media should have taught us, the chances of changing anybody’s mind online are vanishingly small. It is even less likely when the person you hope to convince is constantly fed an entirely different narrative to ours, whether it’s about Uyghurs or Ukraine. “If you talk with people from China and increasingly, from Russia, be aware that they are living in a different truth to yours”, says Open Doors researcher Thomas Muller. “We are increasingly living in times of the ‘splinternet’; If you are talking with someone from China or Russia, be aware that people are living in their own bubbles, convinced of the propaganda they are fed.”

“We are not digital warriors,” adds Peter Phillips. “We need to witness Christ in what we do. That’s why I think it’s much better to share a good verse from the Bible than try to tell people they are deluded. Let love win.”

For more information on how you can support Open Doors advocacy work, highlighting the scandal of digital (and non-digital) persecution worldwide, visit their website