As war continues to rage, many people in Ukraine are hungry for God’s word – but they don’t want to read it in Russian. Now, a new Ukrainian language version is reaching more people than ever 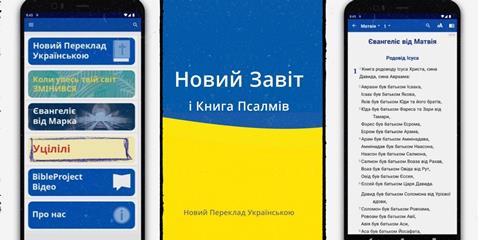 In February this year, as Russia invaded Ukraine and the world looked on in horror, a photograph went viral. It showed a group of Ukrainians on their knees, praying in the snow. While it was assumed the image was recent (it was not; the photo has since been proved to be at least three years old) it showed something very real: the heart that the Ukrainian people have for God.

Now, more than four months later, war continues to ravage the country. Cities have been razed to the ground and millions of people have been displaced. The headlines may not be as regular or all-consuming here in the UK, but in Ukraine, the war continues unabated. But alongside so much fear, hurt and pain, there is also a glimmer of hope. Over the course of the invasion, Christian charities, missionary organisations, pastors and leaders continue to report that among the Ukrainian people who are living through such unimaginable horror, there is an ever-increasing hunger for God’s word.

In my own tongue

For many years, the Church in Ukraine only had access to the scriptures in Russian, or a Ukrainian version which served the Russian Orthodox Church. Even before the invasion of February 2022, this was a significant issue for those who, following the annexation of the Crimea and occupation of the Donbas region, see Russian is the language of the oppressor. With the emotional and historical baggage attached, the evangelical Church in Ukraine have been pleading for a contemporary Ukrainian language version of the Bible for many years.

When you see people who are crying thank you for the Bible, you know you are in the place where God wants you to be

As chaos unfolded in Ukraine in February, Biblica, the international Bible society, expedited the release of a new translation of the New Testament and Psalms in contemporary Ukrainian. Within just 90 days, the app had been downloaded almost half a million times. And there has also been huge demand for printed Bibles. Biblica had planned to print 10,000 copies of the New Testament in Ukrainian this June, however partners on the ground and in surrounding countries have requested 500,000 copies as the demand has been so high.

Mark Finnie, Biblica’s vice president for Europe and the Middle East said the demand showed an “extraordinary” hunger for God’s word. “Of course, the humanitarian need is great, and it will become greater,” he said. “But there is a unique opportunity for Christians around the world to provide Bibles, in any way possible, to a nation crying out for them.”

As bombs fall and lives continue to be lost in Ukraine, Biblica’s app is enabling people who remain in the war torn country – as well as those who have been forced to flee - to find sanctuary and peace in God’s word.

It is, in part, a response to the work that the Christian community are doing, says Oxanna. Forced to flee to Romania with her daughters, leaving her husband and sons behind in Ukraine, she is now using her business and ministry experience to serve others. People "have seen how Christians are helping" she said. As a result, “they want to learn how to speak to God, how to read the Bible.”

Victoria Raichynets and her husband, Anatoliy, have been separated by the Russian invasion. They have lost their apartment to a bomb, but they have not left their country. While Anatoliy continues to coordinate relief efforts in Kyiv, Victoria coordinates another hub in the south west of Ukraine, where many people from the capital have fled.

Victoria says that she cries most days and, at times, she feels broken by the ongoing impact of the war. “When you look into the eyes of the Ukrainian people you see hopelessness, helplessness and pain as each day people are more traumatised,” she said.

“Then, when you see people who are crying thank you for the Bible, thank you for bringing [them] out of the bombs, that’s when you know you are in the place where God wants you to be, doing what he wants.”

Trevor WilsonTrevor Wilson is Biblica's MENA-Eurasia strategic partnerships and projects director. His role involves working with partners to assist them as they develop relevant formats of Biblica’s translations, and he is also responsible for our Rising Generations programmes across Europe. Trevor is married to Katie. They have two daughters and live in Belfast, Northern Ireland