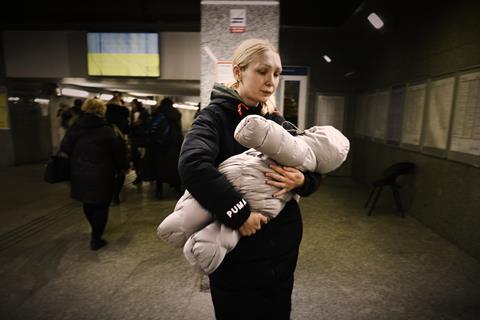 A woman carries a young child after a train carrying some 350 refugees from Kyiv, Ukraine at the Warsaw East train station in Warsaw, Poland (STR/NurPhoto)

Britain has seen both the best and the worst of responses to the Ukrainian refugee crisis so far. The best and most inspiring have come from individuals taking their own initiatives to help those fleeing the Russian invasion; plus many local authorities and support organisations, including churches, mobilising volunteers and hosts.

Among the worst at responding have been obstructive individuals and central government, more of which in a moment.

Where I live in East Sussex, the district council (Wealden) was last week claiming to have matched more Ukrainian refugees with hosts than any other local authority in the UK. Across the five local authorities of East Sussex, 1,236 were expected (with visas issued), 341 had arrived and there were 517 hosts.

On the deficit side of the balance sheet, the anecdotal evidence is more dispiriting. Some of it can’t be helped – rural areas may contain larger and more useful accommodation, but access and transport infrastructure can frustrate the best of intentions. It’s also true that the hosting of traumatised refugees is probably a more challenging project than many elderly and vulnerable hosts can or should manage. Hearts may be willing, but capacity and ‘bandwidth’ may be weak.

More depressingly, it has to be said that there is a good deal of virtue-signalling, self-entitlement and competitive compassion about. A bourgeois appetite for showing off some pristine Ukrainian guests, who happen to be marvellous cooks, is apparent.

James Bartholomew, who writes in The Spectator of taking in a mother and daughter who rustle up dishes “far more delicious than anything of that sort I have had before”, adds proudly that there is “a hint of rivalry between [friends] to secure these prized guests.”

Any parish priest will be familiar with the imprecation from a congregant that “something must be done”, though it’s invariably someone else who should be doing it. Those of us in affluent parishes will also be familiar with those who want to be seen to be wealthy enough to be doing something – but who are emitting far more heat than light. One can reasonably assume that “they have their reward already” (Matthew 6:2).

Which brings us to central government. There’s a clue in the name – one would hope that it was both central to this issue and governing of it. Neither of those things seems to be true.

It’s not just that the UK was slow to act on the Ukrainian refugee crisis, managing pathetic three-figure totals of visas issued in the early days, while countries such as Germany and Poland were waiving visa requirements and welcoming hundreds of thousands of desperate people. Nor that there were dreadful, obstructive inefficiencies that saw qualifying refugees turned back from the French coast and callously told to apply through Paris or elsewhere, on computer software they didn’t have and in a language they didn’t speak.

All that would be wretched enough. But it’s my contention that the circumstantial evidence is strong enough to point to the obstruction of Ukrainian refugees being a deliberate political manoeuvre, aimed tactically at protecting the Rwanda asylum scheme, which prime minister Boris Johnson hopes will save his political skin with the right wing of his Conservative Party and in the left-wing northern seats he won from Labour in the 2019 general election.

Just look at the timing. Temper-challenged home secretary Priti Patel was “apologising” in the first week of April for the fact that the UK had managed only 1,200 visas for Ukrainians. She claimed to be frustrated herself: “It takes time to start up a new route.”

The route she had in mind may not have been from Ukraine to the UK, but from the UK to Rwanda. Just a few days later, on 13 April, she was in Rwanda’s Kigali to sign the deal to offshore Britain’s asylum processing to that country.

So of course she couldn’t have waived visas earlier, as Germany and Poland had, to allow Ukrainians visa-free sanctuary in the UK. They would have had the same immigration status as anyone else arriving without a visa.

At that stage, Patel and Johnson were expecting to be transporting such immigrants to Rwanda “within weeks”. Even they, one assumes, would have realised that exiling Ukrainians to Rwanda wasn’t a good look. So the issuing of visas to Ukrainians had to be delayed until after the Rwanda deal was done.

This matters very much indeed. And not just because it amounts to commodifying refugees for personal political survival. It matters because we are more than a nominally Christian country, with a national Church established in law, with 26 bishops sitting in the upper house of the legislature (however much Johnson may treat them with contempt).

Finally, it matters because in the rest of the country, every day, ordinary people are living gospel lives – whether they mean to or not – in servant ministry of refugees who need them most, while those who govern them have turned away for political gain. And that’s an abomination.