End times theology: Why Russia's invasion of Ukraine is significant

The spirit of antichrist is present in much of the world, including Russia, says theologian and end times teacher John Hosier. He explains why world events are a challenge to church leaders to once again start preaching about the second coming of Christ 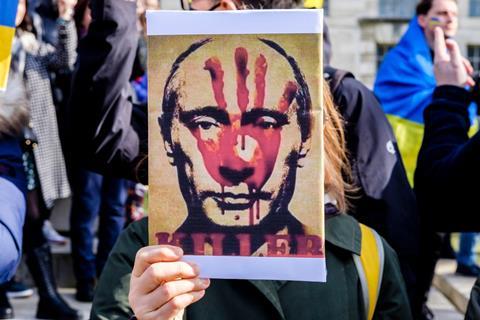 Eschatology is a minefield!

Christian history is littered with mistaken predictions about the end times. As one who has preached, written and talked a lot on the subject I’m only too aware of the dangers. Nevertheless the Bible speaks approximately 320 times of the return of Christ, so it’s hardly a subject that should be ignored.

Whatever, theories, schemes, plans and predictions that may be offered on the end times one thing is absolutely certain – if you believe the Bible you must believe that Jesus will return in the future (second coming) in majesty and glory. One verse sums it up well: "We wait for the blessed hope – the appearing of of the glory of our great God and Saviour, Jesus Christ.” (Titus 2:13)

I think this is an under-preached doctrine today. Anecdotally, as I’ve asked leaders over the years about preaching on the second coming in their churches I always draw a blank. When I was a young Christian many believers had a really active expectation of Jesus returning in their lifetime. Today I almost feel that that believers have no real expectation of that.

However, the present war in Ukraine stirs me to attempt a contribution for the need to urgently consider this subject. No one has a perfect eschatology, but there are certain things happening right now that cause me to believe this is not the time to ignore teaching on the second coming.

There are two outer parameters to what I want to share. One is the absolute certainty of Christ’s return and the other is that I am absolutely not claiming that I know the outcome of the war in Ukraine will be the return of Jesus. However between those two parameters there is a lot of scope for comment. Christ will return at some point in the future. From our perspective it will be a day on the calendar and a time on the clock, although calendars and clocks will then have their final moment! A voice will come from the throne, "It is done!" (Revelation 16:17), history as we know it will be over, Christ will return and there will be a new heavens and earth.

Scripture is very clear that we don’t know when this will happen (Mark 13:32). But don't overlook the verses that tell us to be alert and awake about the second coming. Particularly note 1 Thessalonians 5:1-6. "You know very well that the day of the Lord will come like a thief in the night. While people are saying, Peace and safety, destruction will come on them suddenly, as labour pains on a pregnant woman, and they will not escape. But you brothers and sisters, are not in darkness so that this day should surprise you like a thief. You are all children of the light and children of the day. We do not belong to the night or to the darkness. So then, let us not be like others, who are asleep, but let us be awake and sober." (Emphasis mine) This means there are future events which should at least put us on notice that Christ really is going to return.

I think Russia’s invasion of Ukraine is eschatologically significant

Jesus himself, warns us against complacency towards the end times. "As it was in the days of Noah, so it will be at the coming of the Son of Man. For in the days before the flood, people were eating and drinking, marrying and giving in marriage, up to the day Noah entered the ark; and they knew nothing about what would happen until the flood came and took them all away. That is how it will be at the coming of the Son of Man." (Matthew 24:37-39). It seems to me very much like that at the moment. Escalation of the war in Ukraine could very quickly involve the UK directly and once there is an escalation then the threat of nuclear weapons becomes a very real possibility. But I don’t see people rushing along to church and showing signs of concern about their spiritual state or eternal destiny. Of course escalation might not take place at all and so what I’ve just written could then sound way over the top. But the fact is I don’t know; none of us knows and therefore it is surely a time to be alert and to remember our blessed hope.

Putin and the antichrist

There are two basic reasons why I think Russia’s invasion of Ukraine is eschatologically significant. One is the threat of nuclear war that could involve us all. The other is the more complicated issue of the antichrist.

Think right now of the ever-increasing persecution of Christians around the world and even in democratic ‘Christian’ countries of the increased hostility to Christian ethical viewpoints with parts of the church itself also caving in to distinctly non-Christian values.

Most evangelicals agree there is always an antichrist spirit at work in the world (1 John) but also there is an end time antichrist. Exegetically I think the antichrist would seem to be an identifiable person. I’m in good company thinking this. "We can, I think, be certain that the antichrist will ultimately be concentrated in one person, who will have terrible power, and will be able to work miracles and do such wonders that he almost deceives the elect themselves" (Dr Martyn Lloyd-Jones, Great Doctrines of the Bible)

We are living at a very dangerous time in history

However, because there is an antichrist spirit at work maybe the identification of just one person could be overdone. What can be identified are the marks of an antichrist system or structure from Revelation 13. These include great power and authority (v2) and therefore the ability to control whole populations. There's a fatal wound that is healed (v3). Worship of the Antichrist (v4). An enforced peace probably created by oppression and terror (v11). A huge propaganda machine (v11-14) Economic controls and restrictions (v16). Much of this can already be seen in authoritarian states like China, North Korea, Belarus, Iran, Afghanistan, Syria etc. But other states are moving in the same direction even if they are technically democratic, such as Turkey. Of particular concern is India, where more state control is coming in and Hinduism is being imposed in various ways. Now Russia has shown its hand. Elections are rigged, the state is controlling and oppressive, protest and opposition are not allowed, all free media is closed down and the ‘truth’ is what the Kremlin allows to be said and broadcast. Ukraine is being invaded to bring it under the same controls. Add all this together and a majority of the world’s population is moving towards being controlled by antichrist systems and structures.

There is always a religious element mixed in with this. In Turkey and Afghanistan it’s Islam. In North Korea the leader is worshipped as a god. In Russia the Orthodox church is blessing Putin’s invasion and he seems to view himself as some kind of saviour of the Russian Orthodox church. I’ve seen people interviewed who describe Putin as a god and I’ve watched an interview with Putin where he stated that if a retaliatory nuclear strike was launched on Russia then Russians would wake up as heroes in heaven – that’s quite some religious fanaticism.

I’m particularly fascinated by the reference to the Beast receiving a fatal wound  and yet living. This seems to be the case with all sorts of antichrist types and systems in history, but let me stick with just two right now. We know that assassination attempts have been made on Putin. At least four, and some claim 20. If people try to kill you but you go on living what does that do to your ego? It would be easy to believe that you have some kind of super or divine power. In Afghanistan the Taliban received a ‘fatal wound’ at the hands of the Americans but now return and live again to rule, control and terrorise the nation once more. What kind of gods do those leaders think they are?

There can be no question that the war in Ukraine is going to increase tribulation upon the earth. Every day I read reports of the increasing hunger and starvation that this war is bringing on the world. Lack of food, sky high prices, oil and fuel costs etc. We feel these things even in the affluent West.

For good measure throw in climate change, increasing unrest and violence around the world, the increasing persecution of Christians, China and Taiwan and the deepening moral void of Western society. We are living at a very dangerous time in history. In the UK virtually no one has a memory of war or real catastrophe. We’ve had some near misses; the Cuban missile crisis and 9/11 and it becomes easy to think we’ve got through before and we’ll get through again...these things pass. And perhaps this crisis will indeed pass. I’m giving no prophecy that we are at the end of history. But I do see the warning Jesus gave: As it was in the days of Noah...

This is not a day for wild predictions; I’m certainly not advocating we head for the hills. You don’t have to agree with all my analysis. However we are called on to deliver the whole counsel of God. This is surely a time to remember that however complex end times teaching can sometimes be, we do believe there will be an end time and that we can expect increasing trouble before the end. We have a message which Paul says we are to share with one another to encourage one another. (1 Thessalonians 4:18) Jesus will return and it wouldn’t be a bad thing at this time of heightened tension in world history to dig into this truth and hope of Christ’s return.

John HosierJohn Hosier is an experienced church leader, theologian and teacher. He is the author of The Lamb, the Beast and the Devil: Making Sense of the Book of Revelation