Does the Bible prohibit sex before marriage?

Last week the Methodist Church affirmed the status of cohabitation. Many Christians have assumed the Bible forbids sex outside of marriage. But what do the texts actually say? 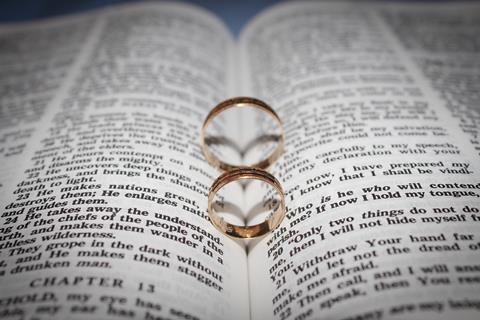 Source: Image by almatricio from Pixabay

The wording of last week’s Methodist Conference motion is rather odd; it “recognises that the love of God is present” when people “enter freely into some form of life-enhancing committed relationship whether that be through informal cohabitation or a more formal commitment entered into publicly". But it says nothing about how we know whether something is "life enhancing" and it makes no comment about the nature of "commitment". The universalist assumption is that somehow God’s love is present, whether those involved are Christians, Muslims, or atheists.

But the implicit question it poses is: what is the Christian view of sex outside marriage? For those who are already married, the answer is clear: "You shall not commit adultery" is commandment seven of the Ten (Exodus 14), coming after murder and ahead of stealing. In its social context, where it was assumed all adults were married, and men were the main social agents, it was primarily a command to men not to have sex with another man’s wife. However, in the ‘casuistic’ regulations (dealing with cases, ‘If X happens, you must do Y’) of Deuteronomy 22:22, both parties to adultery are held to be equally responsible. None of these texts specify whether the man involved is married.

The main text in the Old Testament offering regulation of sexual activity is in the ‘epideictic’ passage (not dealing with cases, but in absolutes, "You shall [not]…") in Leviticus 18. Sexual activity is prohibited with close relations, with a women during menstruation, with someone else’s wife, with other men, or with animals. But there is no explicit prohibition of sex before marriage.

The best explanation of this is simply that it wasn’t necessary. In ancient cultures, with no reliable method of contraception and with women dependent on their husbands for financial provision and social standing, sex could not be detached from marriage. The closest we get to a prohibition on sex before marriage is in the (casuistic) command in Deuteronomy 22:28: if a man has sex with an unmarried or unbetrothed woman, then they must marry. There has been much debate about this verse (should a woman be forced to marry the person who raped her?) but, along with other texts, it highlights the assumed context. Sex belongs in marriage; unmarried women and men abstain from sex; and even when they are betrothed (committed to marrying), they do not have sex until after marriage. And this makes sense of the earlier case, if a man accuses his newly-wed wife of not being a virgin (Deuteronomy 22:13–21); if she has had sex already, she is in effect another man’s wife, and the penalty is the same as that for adultery. (Note that the accusation cannot be made lightly; the penalty for false accusation is significant.)

This is the pattern assumed in the narrative of the creation of Eve in Genesis 2:24. The order is clear: "a man shall leave his father and his mother and hold fast to his wife, and they shall become one flesh." The old social organisation is disrupted as the man leaves his birth family; the man and his wife form a new social unit ("hold fast" or "cleave" is language used elsewhere of tribes settling in their territory); and they then have sex. This pattern is reflected in the language of the Church of England wedding service: "May the union of their bodies strengthen the union of their hearts and minds."

The subject of cohabitation or sex before marriage is not explicitly mentioned in the New Testament either. Instead, both in the teaching of Jesus (Matthew 15:19, Mark 7:21) and Paul (1 Corinthians 6:18, Galatians 5:19), we are urged to avoid porneia, translated ‘fornication’ or ‘sexual immorality’. But what did that include? For Jesus and Paul, their hearers and those reading the texts, this would certainly have included the prohibited activities listed in Leviticus 18. But the prohibition on prostitution was understood by Jews of Jesus’ day to exclude all forms of sex outside male-female marriage, including sex before marriage. The verb used for ‘promiscuity’ in the Greek version of Deuteronomy 22:21 is expornueo, the verb with the same root as porneia. We should therefore read all New Testament negative comments about ‘sexual immorality’ as including sex before marriage (including cohabitation) as well as sex outside marriage (adultery).

This is confirmed by Paul’s discussion of sex and marriage in 1 Corinthians 7. People are committing porneia, perhaps because of a misguided view that marriage belongs to this age, and ‘spiritual’ Christians are now living the resurrection life in which there is no marriage (Matthew 22.30) -but their sex drive has not abated! Paul’s solution to this is that "each man should have his own wife and each woman her own husband", implying that those committing porneia are not yet married, so the term must refer to sex before marriage.

All this is a reflection of the Bible’s anthropology. Created in the image of God, we are psychosomatic (body-soul) unities. What we do outwardly with our bodies should reflect our inner attitudes and dispositions. If we are not fully committed to someone in the lifelong covenant of marriage, then we should not fully commit bodily in the total giving of ourselves in sex. When our external, bodily life does not match our inner, spiritual life, then pain results.

The rise of cohabitation and casual sex has a serious impact on individuals and society as a whole. Mark Regnerus, in his book Cheap Sex, notes that there used to be a kind of social contract; the price men had to pay for sexual intimacy was the commitment and security of marriage that women wanted. But with the rise of sex outside of marriage, men tend to get what they want, while women lose what they used to have. It has been shown that cohabitation is far less stable than marriage, and those who cohabit prior to marriage have a greater rate of marriage breakdown. The losers in this are mostly women and children; 90% of single parents in the UK are women.

Sex is a good gift from God, but it is also powerful, affecting us deeply, with the potential to do great good (in ending loneliness and bringing intimacy) but also to do great harm. Perhaps that is why both Jesus and Paul talk about it so often, making it an even more important issue than it is in the Old Testament.