How many civilians must die before the Russian Orthodox Patriarch intervenes? 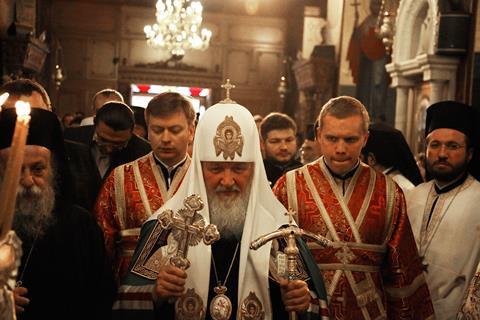 This week a Russian Orthodox priest said to his congregation, “Hopefully soon, we’ll have Moldova, Kazakhstan, Ukraine, Georgia, and the Baltic states join our great Russia.”

I feel like someone put me in a time machine and transported me back to the dark ages. Are the Russians engaging in some kind of crusade?

This behaviour by a person of the cloth is, simply put, abominable.

How is it possible for any Christian leader who reads the Bible that I read, to do anything but condemn - in the most direct terms - the senseless, brutal invasion of Ukraine by Russia? How many civilians must die before the Russian Orthodox Patriarch, Kirill of Moscow, intervenes? How much of the global credibility of the Christian faith must be destroyed before he disassociates from the state power that is causing the biggest man-made disaster in Europe since the Second World War?

Let’s be clear: this is Putin’s war in Europe. And he has co-opted the Russian Orthodox Church in his venture.

It is not the war of the Russian people against Ukraine, and it certainly isn’t some kind of arcane holy war. On the contrary, the powerful Russian Orthodox Church ought to be appropriating whatever influence they have to stop these senseless acts.

Putin’s descent into the madness of power may be a surprise to some but it shouldn’t have been a surprise to our Russian Orthodox brothers and sisters, as his ascent has run parallel to the ascent of the political influence of the Church under Patriarch Kirill.

Along the way, he destroyed dissent. He ensured the longevity of his power by changing the constitution of Russia. He subverted the comparatively free post-Soviet Russia and made himself a tsar.

Now, we’re seeing in stark form how his vision of a renewed Soviet empire required the hijacking of religion to achieve its aims. It’s time for the Russian Orthodox Church to take back their religion. How tragic it is that Putin’s political mission required the cooperation of a Church that was viciously persecuted during the same Soviet era which commands Putin’s nostalgia.

While the world amps up political and economic pressure on Mr Putin, it’s time for global Christianity to rise up and put unrelenting spiritual pressure on the Russian Orthodox Church, too. And we should begin with its Patriarch.

The presence of the Russian Orthodox Church (ROC) is ubiquitous, extending into all spheres of Russian society. Roughly 80 per cent of Russians are under the pastoral care of ROC’s Patriarch Kirill I of Moscow, who is revered not just in Russia, but by the entire Orthodox world. He may be the only person in Russia who can rival Putin’s power.

This Patriarchate’s influence is also ubiquitous. And it has grown since the ascension of the forceful personality of Kirill I. Observers call him the “soft power arm of the Kremlin.” Under his leadership, the Russian Orthodox Church is now the largest landowner in the Russian Federation. He has solidified his power, in part, by walking in lockstep with Vladimir Putin, even profanely referring to Putin as “a miracle from God.”

The Russian Orthodox Church believes that, along with Putin’s administration, they are stalwarts of traditional, conservative Christianity, guarding it against the culturally corrupt West. Their vision is of a “Holy Russia” that will continue expanding until it controls the Eurasian landmass. This provides a moral ideological base on which they can legitimise the Kremlin’s anti-Western war.

This vision also shouldn’t surprise us. It’s failure of global Christianity that we didn’t see it and intervene earlier.

Who will be the Bonhoeffer of the Russian Orthodox Church?

None of this is new information. The former director of Harvard’s Centre for International Affairs, wrote that it is actually religion that has served to re-stimulate Russian’s fears about the security of their southern borders. And a noted international relations advisor stated in a Forbes editorial: “the Russian Orthodox Church is a powerful force as it marches in the footsteps of the expeditionary Russian Army trespassing into the sovereign territories of neighbouring countries.”

Time to turn the tide

Now, it seems, the tide is turning. Already, Russian Orthodox leaders around the world, and in Russia, are standing up to their own Patriarch in opposition to Putin’s war, but it isn’t enough. More must stand and we must stand with them. Who will be the Bonhoeffer of the Russian Orthodox Church?

The churches of Europe critically failed to speak and act on behalf of the Jews during the rise of Hitler. While Hitler is a singular figure in modern history to whom we should not compare, the hate of Hitler is alive in every generation in various forms. And whenever the Church finds itself in such situations, it is their job to say: “Not on our watch!”

I pray the Patriarch reverses course but, in the meantime, he must hear from millions of Christians, now. We should not reserve our prophetic voice just for politicians, but also for the Church. Patriarchs should not have blood on their hands. Putin’s spiritual oligarch needs sanctioning by our prayers and from our pulpits. The Church must not sit idly by while our religion is used to shed innocent blood.