‘God sent me to a war zone’

When the Soviet Union collapsed and Chechnya descended into war, Paula O’Keefe found herself bringing the gospel to a people scarred by conflict and hungry for God 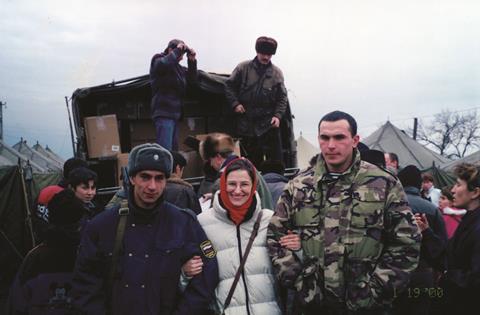 From as far back as she can remember, Paula O’Keefe wanted to be a missionary. As a child growing up in Hampshire, she was immersed in the stories of Spirit-filled women and men risking their lives to bring the gospel to those who had never heard of Jesus, and she yearned to be part of the action. Whenever her pastor asked if anyone in the congregation felt called to mission, a young Paula would be up, out of her seat, running forward for prayer.

As she got older, her plan was to marry an interest in science with her passion for Jesus by becoming a missionary doctor, but God intervened. “When I was doing science A-levels to study medicine, the Lord asked me to lay it down,” Paula explains, something she found incredulous at the time as she grappled with what this meant for her future. “The Lord led me to do psychology, Russian and teaching at university instead – and then I went to Russia for 20 years. I would have had to do a Russian degree in medicine to become a doctor there, but I could use the psychology and the teaching.” Little did Paula know, the Slavic language God had nudged her to learn as a young student would become vital for navigating the complex world he was calling her to next.

STEPPING OUT IN FAITH

Paula started teaching English to students in Krasnodar in southern Russia in 1993, just a year before the onslaught of war, 350 miles away in Chechnya. Her roommate, Dasha, also a Christian, had a prophetic dream about going to the country, and so joined a small group of other believers on a mission trip to Grozny. “They went there and basically looked for young people to invite to a Christian camp. It would be a bit like going to Ukraine right now. All of the young people gave their lives to the Lord, and so they had a church on their hands.” Dasha soon moved to Grozny in spite of the ongoing conflict, but returned to Krasnodar every two months, telling Paula about the growing church there.

“The Lord started speaking to me, telling me he wanted me to go”, Paula explains. “At first I was really scared about going, and the Lord said to me: ‘Paula, when your mum is happy about it, then you’ll go.’ I thought: Well, that’s not going to happen, is it?” But six months later, when her mum visited Russia, she received her answer. “While we were there, Mum got to see the people from Chechnya and she could see that I loved them and they loved me. She said: ‘Paula, I’ve got something to say to you. If the Lord calls you to go to Chechnya, I would be happy about it.’” Her blessing was the confirmation Paula needed, and the 25-year-old soon found herself on a bus to the war-torn, majority Muslim country.

Paula’s time ministering in Chechnya would eventually span six years, and would involve bringing humanitarian aid to people whose lives had been shattered by a two-year Russian invasion following the collapse of the Soviet Union and a bid for independence. She was also called to share her faith in a country that had lived under atheist communism and was now being pulled into the cold embrace of radical Islam. “There were a lot of people who were learning about Islam and a lot of mosques going up…There were a lot of atrocities starting to happen; women being killed for showing their hair or being accused of adultery. They wanted Sharia law.” In this context, Paula was pastoring the church Dasha had started. She remembers one particularly dramatic moment when six Chechen fighters stormed a meeting of 80 new believers at a Christian camp, shouting at them to stop singing. “For a split second I stopped,” says Paula. “And then I thought: How dare anybody tell me to stop worshiping my Jesus. So I just started strumming and singing in tongues really loudly. The whole room started singing and I saw the colour drain from the face of the guy who had told me to stop. He said: “Sorry!”, and they ran away; they got really scared! When we get to heaven we’ll find out what happened – whether they saw angels.”

HOW DARE ANYBODY TELL ME TO STOP WORSHIPING MY JESUS

Paula’s stories of God’s protection and provision during her time in Chechnya are numerous, and detailed in her new book Miracles in the Midst of War (Sovereign World). “We saw people being healed of all sorts of things,” she tells me. During one encounter with a mother whose child had cerebral palsy, the little boy, who had never talked or walked, was miraculously healed after Paula prayed for him. Other examples include God warning her not to go to places that were later attacked by soldiers.

Paula puts her courage down to a strong sense of calling and of being in God’s will: “I just loved being there and holding the people in my arms who had been through so much; to be able to bring food and smiles to people’s faces. It’s just what I’m called to do…I would hate to do a nine-to five job stuck in England!”