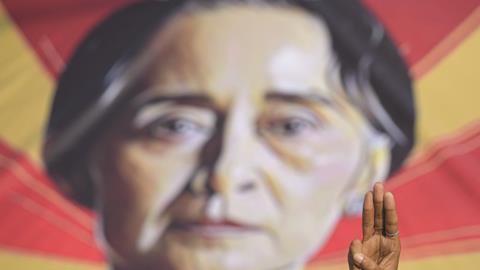 A military coup, Covid-19 and no religious freedom is breaking the people of Myanmar. Here’s how to pray

Chris Mabey, whose wife fled Myanma as a teenager, reports on what is taking place in the majority-Buddhist nation, and explains how you can prayerfully support the fledgling Christian community there

In February 2021, the tanks of the 77th Light Infantry Division rumbled onto the streets of Yangon, Naypyidaw and Mandalay. The Myanmar military junta, stung by another landslide election victory by the National League for Democracy (NLD), declared a year-long state of emergency. As with the student protests in 1988 and the Saffron Revolution in 2007, when orange robed monks led the revolt, the patience of the normally peace-loving people snapped. Waves of students, teachers and medics marched in protest. Soldiers responded with tear gas, rubber bullets and, eventually, live rounds and even air attacks. To date, an estimated 1,375 protestors have died and thousands more have been incarcerated. Yet still they march. In the plaintive words of one Burmese youth: “We were just learning to fly, and now they have broken our wings.” A perfect storm of conflict, the coup and Covid-19 are pushing the Burmese people to the brink.

My wife, April, grew up in what was then known as Burma. In 1964, aged 14, she fled with her parents and two sisters to the UK. General Ne Win and his army had just taken control of the government and things were turning ugly. Many of their relatives stayed in Myanmar, and so visits back have afforded us the opportunity to drop by for a chat over a curry. In 2018, when we last visited, it seemed that Myanmar was inching towards democracy. As usual, we watched the crimson sun rising over the buzzing, steamy city of pagodas, high-rise apartment blocks and palm trees. We were humbled by the good humour and hospitality of the locals in spite of all their deprivations. But the main focus, as with all our visits, was the challenge of teaching in a small Bible college where the student ‘fees’ are a dollar a day.

Lincoln and Leah are a Christian couple from the Chin ethnic group, one of the lowest in Myanmar’s ethnic pecking order. They and their small team have a vision that has stayed rock-solid for 15 years: that a better understanding of the Bible will help the students navigate their animist, Buddhist-dominated communities where political struggle is rife. Myanmar is made up of at least 130 ethnic groups, each with its own dialect or language, culture and vested interests. Many have long maintained their own militia, fighting for basic human rights. Civil war between the ethnic groups and the dominant Bamars, who make up the military junta and army, has torn the country apart for 60 years.

In Myanmar, there is a close tie between ethnic identity and religion. Violations of freedom of belief have always been part of the story of Burmese Christians, who owe much to pioneer missionaries like Adoniram Judson and, later, Arthur and Laura Carson. Theravada Buddhism has infused pacifism and compassion into the Burmese mindset for centuries and around 90 per cent of the population is Buddhist. In stark contrast, there is an influential group of nationalistic Buddhists in government who issue hate speech and death threats against Christians and Muslims.

When we first met Lincoln and Leah, we stood with them in the monsoon heat, surrounded by dense undergrowth, as they shared their hope to build a Bible college on the edge of Yangon, the nation’s largest city. At the time of our last visit, eight years later, the octagonal two-storey building was almost complete. Just two wings of classrooms remained yet to be built. This image of the ‘wingless’ college is a poignant echo of unfinished business at the national level.

THE TROOPS WERE AIMING THEIR RIFLES AT PEOPLE’S HEADS 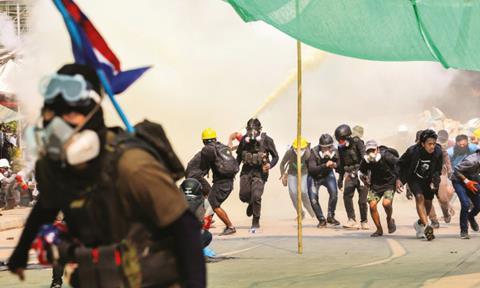 Despite the violent response from soldiers, and risk to their own lives, protesters continue to take to the streets

A few weeks ago, we met a young Burmese woman at a local pub here in the UK. She described the weeks in Yangon when, as a mother with two young children, the military coup rocked her world: “I had to join the protest on the streets,” she said. “I couldn’t just let it happen.”

Day after day she marched in solidarity with friends and neighbours, most of whom were students and young people. “On one occasion I noticed government troops on the rooftops either side of the street. I wasn’t worried because I assumed they were just keeping an eye on things. Then my friend beside me dropped to the ground. She was shot dead. I froze and must have passed out. I woke to find friends shielding me in the bushes telling me to keep down. I had blood splattered over my clothes.

“My husband told me not to venture out on the streets again. I have lost three friends. The troops were aiming their rifles at people’s heads…can you imagine that? You know, me and many of my friends were born in 1988, the year of the student protest on the streets on Yangon. Now 33 years later, young people are being shot at again.

“Fortunately we were able to leave the country. But I’ve left behind members of my family and close friends. I am so scared about their safety.”

Experiencing tight pains in her abdomen, she visited her doctor who diagnosed her with PTSD and referred her for counselling. “Where is God in all this?” she asked us. It is a question that bothers me too.

Hot on the heels of the military coup came the full horror of Covid-19. In August, we finally managed to speak to Lincoln: “To start with”, he told us, “the pandemic was handled quite well, but by the time of the Delta variant, there was no government policy. No care. I don’t think hell will be as bad as this…”

After a pause he continued: “Even in my mother tongue it is difficult to express the awfulness of the situation. In July, there were 3,000 burials a day in Yangon. The morgues couldn’t cope. People were dying for lack of oxygen. Some shops trying to sell it were shut down by the troops.” A contact working for Medical Action Myanmar told us that now, the hospitals which are still open are eerily quiet. They put this down to most of the population having been infected. People have either died or built up natural immunity.

The consequences of this downward spiral are dire. The World Bank has predicted a sharp increase in poverty, while the United Nations’ World Food Programme said the crisis “will severely undermine the ability of the poorest and most vulnerable to put enough food on the family table”. The UN Development Programme has warned that the impact of the political crisis and the pandemic could see as many as 25 million people slide into poverty this year, with 3 million already in need of humanitarian assistance. 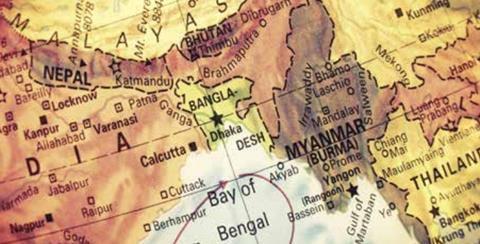 Myanmar is suffering from the world’s longest civil war, which began immediately after it gained independence from the United Kingdom in 1948. The country has more than 100 ethnic groups, many of whom have taken up arms against the Tatmadaw, Myanmar’s armed forces. The conflict is over autonomy, ethnic identity, drugs and control of natural resources such as jade.

In February 2021, a military coup ended a decade-old peace process. Since then, Chin, a Christian-majority state, has been at the forefront of some of the strongest resistance to the Myanmar military junta. Churches in predominantly Christian communities are being attacked. Many Christians caught up in the conflict have fled into the jungle and up to 250,000 are now living in displacement camps. Many of these are cut off from aid and do not have proper food or care. More than 30,000 people from Chin State are seeking refuge in India, according to the Chin Human Rights Organization. The United Nations has voiced concern that the situation mirrors the violence which took place in Rakhine State against the Muslim-minority Rohingya community four years ago.

88 per cent of the nation are Buddhist, followed by 6 per cent Christian and 4 per cent Muslim. Myanmar is number twelve on Open Doors’ 2022 World Watch List, an annual ranking of the 50 countries where Christians face the most extreme persecution.

Outside of the ongoing conflict, converts to Christianity from Buddhist, Muslim or ethnic-animist groups face the worst persecution – both from the authorities and from their families and communities. Historical Christian communities such as the Roman Catholic Church face everyday pressure and occasional violent attacks from the Myanmar army or radical Buddhist monks. Many evangelical and Pentecostal congregations face persecution, especially in rural areas. They are monitored and also sometimes hindered from gathering or holding Sunday school classes.

Faced with atrocities on the streets of Myanmar, it’s easy to feel paralysed and helpless from afar. The UK foreign secretary has repeatedly called on the junta to end the violence, release political prisoners and engage in dialogue to enable a return to democracy. The recent sentencing of Aung San Suu Kyi, leader of the NLD and state counsellor, on trumped-up charges shows they are not listening. But young people in Myanmar are media-savvy and well informed about external trends and events. This builds pressure from the bottom up as people get a taste for more egalitarian values. “The junta have taken our country but no one can take my education from me,” says one nurse working tirelessly in the Chin state.

There are things that the Christian community can do. The UK has taken unilateral action in response to the coup. This includes imposing sanctions on senior military figures, as well as on key commercial and economic interests. We can press our leaders to go further. Individuals within the junta have ordered, or been complicit with, crimes against humanity, war crimes and genocide. For these, they must be brought to justice.

During the Covid-19 restrictions in the West, we may feel our wings were clipped, but this is nothing compared to the discriminatory laws that restrict freedom of religion or belief, freedom of expression and freedom of peaceful assembly in Myanmar. I have written to my MP to ask him to do all he can to push for reforms. Crucially, this would include an overhaul of the Myanmar education system and curriculum. A Burmese neuroscience post-doctoral student told me that her studies in the US were only possible thanks to a scholarship from the London-based charity, Prospect Burma. “Do you know there are only four clinical psychologists at doctorate evel in Yangon? Sixty years of dictatorship and accumulated trauma and that’s all there are. I aim to go back and be the fifth.”

We were just learning to fly, and now they have broken our wings

Over 30 years, Prospect Burma has helped 2,400 alumni in this way. Students are awarded scholarships to undertake tertiary education outside Myanmar. When qualified, they return to influence their professional fields of law, health, education, human rights, the media and so on. 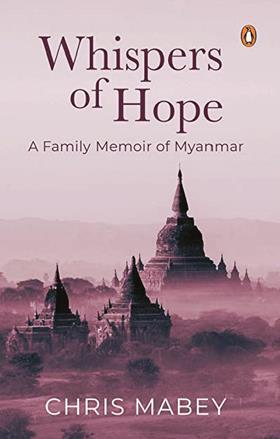 Of course, all this depends on cessation of violence and constructive dialogue. In recent months, the political crisis has deepened. Now, many of the indigenous leaders who previously had the influence to facilitate change at government level have been forced into hiding in the Karen Hills or across the border in India and Thailand. But, ever resolute, the National Unity Government, formed of politicians ousted by the military coup in February, is preparing itself for the day when regime change comes.

Finally, matters shift in the heavenly realms when his people pray. Bring to God your heartfelt hopes, and use the information in this article to fuel your specific requests for people and events in Myanmar. Pray that the bird will indeed fly again

Chris MabeyChris Mabey is a chartered psychologist and emeritus professor at Middlesex University Business School. He is the author of Whispers of Hope: A family memoir of Myanmar (Penguin Random House)