I’m a Christian and I survived 9/11. Here’s what I want the next generation to know

Christina Ray Stanton was around the corner from the World Trade Centre when terrorists flew two planes into the towers. She was evacuated, displaced from her home and suffered PTSD as a result of the 9/11 attacks. Now 20 years on, and working as a NYC tour guide, this is what she wants Christians to know about the most deadly terror attack in America’s history 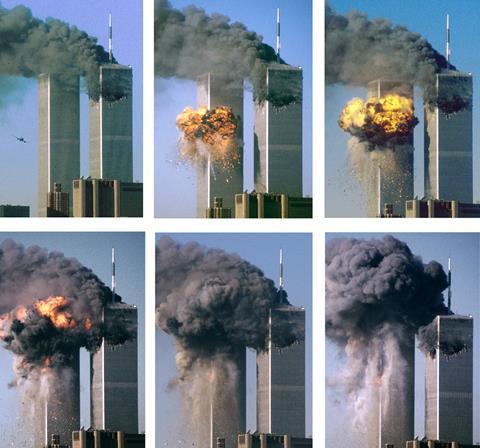 The tour bus rolled slowly down Broadway as I described what had happened to me on 9/11. The 45 teenagers who had travelled from Louisiana to New York City for a three-day field trip were listening intently.

“We lived six blocks away from the World Trade Center and saw the second plane hit the south tower. We ran down 24 flights of stairs to get out of our apartment building, trying to get as far away from the destruction as we could get. But when the towers came down, we were trapped on the edge of Manhattan Island and covered with dust and debris. We were lucky to be rescued after a couple of hours as part of the largest boat evacuation in history. We had to stay with friends until we could return to our apartment, which was a debris-filled wreck.”

I stopped. “Does anyone have any questions or comments?” Multiple hands shot up, while other kids just blurted out their questions:

“Did you see anyone die?”

I hesitated, trying to decide which to answer first and also trying to determine how much these kids actually knew about 11 September 2001. None of them had been alive on that day. They had almost certainly heard about it, perhaps seen pictures. But, if they were like most of my tour groups, few knew the details of how anti-American radicals turned commercial aircraft into flying missiles and aimed them at the World Trade Center in New York and the Pentagon in Washington, DC. Did they know that almost 3,000 people were murdered? Did they have any idea how much was destroyed or how much fear was born that day?

As a licensed NYC tour guide who was directly impacted by the attacks, I feel called to help make sure that younger Americans know what happened that day. I regularly speak to kids in schools and churches, in addition to the ones in my tour groups, to make sure they know how the 9/11 terror attacks changed the world.

I tell people about the four planes that were commandeered by 19 terrorists who planned from the outset to kill everyone on board while using the aircraft itself as a weapon. They targeted iconic buildings that represented America’s military, financial and governmental might. They even trained for this terrible deed in our own country.

I tell them about the twin towers: majestic, modern buildings that reached a quarter-mile into the sky and occupied an acre per floor. I relay how the buildings burned for 56 and 102 minutes respectively from the time the planes hit them until they collapsed - an agonising amount of time for those who were trapped on or above the burning floors - and explain how those fires burned through the towers’ support systems until a total collapse was inevitable. I describe the ground-shaking roar that accompanied the collapse and the ash, dust and toxic gunk that coated everything for miles around—including me.

I remind my listeners that thousands of people were displaced in the aftermath of the disaster and that remains are still being identified. I want them to know that 2,606 people died in and around the twin towers, 125 died in the Pentagon and 265 people died on the four hijacked planes, including the flight that went down in a field in Pennsylvania when passengers stormed the cockpit, preventing it from reaching the US Capitol, its intended target. More than 6,000 people were injured in the attacks, and 344 firefighters and 71 law enforcement officers died at the World Trade Center, while 55 military personnel died at the Pentagon. And I make sure to let my listeners know that people are still dying today, from cancer and other conditions linked to the toxic substances released when the towers collapsed.

Young people rarely realise how all US planes were grounded on 9/11 and how the whole country just stopped for a while. America lost its innocence that day, I tell them.

But as a Christian, I also want young people to understand the significant spiritual lessons that I have learned in the wake of 9/11.

1. There is great evil in this world.

The 9/11 attacks awakened me to a level of evil I had never personally experienced. Sure, I had read about evil deeds in newspapers, seen the results of evil on true-crime TV shows and heard about the powerful existence of evil from my youth pastor. But being exposed to pure, undisguised evil, up close and personal, shook me to my very core.

I was so taken aback that I wasn’t sure I wanted to continue living in a world where that much evil existed. I wasn’t suicidal. I just wanted Jesus to return to earth and call Christians home to heaven so we wouldn’t have to endure it anymore.

In this fallen world, future generations will also be called to face events like 9/11, even though I pray nothing that dramatically destructive will occur again. But even if you never directly experience terrorism, or any other kind of serious disaster, everyone comes to their own personal “Ground Zero” at one point in their lives or another.

The Bible is clear: in this world there will be trouble. But the Bible is just as clear, stating that we should take heart, because Jesus has overcome the world (John 16:33). We all have to deal with the reality of evil in our midst. We all will suffer loss and pain. I simply want young people to know that they should never face those inevitable situations without Jesus. It’s unbearable to deal with such troubles without God guiding you through.

2. There is help in Christian community

In the aftermath of 9/11, my husband and I struggled. We found ourselves unemployed, homeless, and experiencing PTSD symptoms. Brian just wanted to sleep much of the day. I became hyperactive and manic and couldn’t sleep at all. Nightmares, flashbacks and panic attacks were a common occurrence.

Although therapy helped ease some of our symptoms, we needed more healing power to help us cope. We found that in the Christian community. When we began to attend church services after the attacks, we were welcomed and encouraged to get involved in church activities. We joined a Bible study, volunteered with church ministries and even went on a mission trip in 2003. The more we got involved, the more our faith deepened. The church also helped alleviate some of our material needs, giving us money to help with bills, and new relationships within the church community helped us gain equilibrium after the trauma we had experienced.

I wasn’t suicidal; I just wanted Jesus to return so we wouldn’t have to endure it anymore

The Bible speaks volumes about the importance of living in community with other Christians (see Colossians 3:12-15). The community of followers are meant to act as accountability partners, a support system through life’s valleys, and family members who are there for each other. When God speaks of loving your brothers and sisters, he doesn’t give exceptions for those who adopt different political ideas or practice different baptism rituals. He wants us to live in community with each other, although he knows we are a disparate crew. But together we make up the body of Christ - a body that isn’t meant to be divided, and that will make all the difference in dark days like 9/11.

3. We need to help others in need

The 9/11 attacks unleashed a fury of horrific death and mayhem that caught most of us by total surprise. People suffered and died in the twin towers, the Pentagon and on board the hijacked planes without their loved ones to comfort them. In the weeks and months after 9/11, those who lost family and friends, and those who survived the attacks, needed help to navigate their new normal. As Christians, we need to be doers of the word and not hearers only (James 1:22), and that means aiding people in distress.

We are called to take action. That could be offering a listening ear to a hurting individual, making a donation to an organisation addressing need, or joining a team effort to alleviate suffering. A local church assisted us financially. An army of strangers helped us in the aftermath, caring deeply about our wellbeing. They are all heroes to us.

My experiences after 9/11 proved to me how important these actions can be, and the suffering and pain I felt after 9/11 helped me relate better to others who were going through their own troubles. Even though we were fully displaced for only about two weeks, I was surprised to discover how discombobulating the experience was, which gave me a new appreciation for people who struggle with a lack of permanent housing. That appreciation has led me to spearhead efforts to help others, and I eventually founded a non-profit organisation for victims of injustice.

I want young people to remember that the Bible teaches that the world is not our home. Our earthly roots should be in Christ alone because our final citizenship is in heaven. As a result of that assurance, we have the freedom to give away, in increasing measure, to others as we follow Christ’s command to “Go.”

The faithfulness of God

As Christians, it shouldn’t take a terrorist attack to remind us of the presence of evil, the importance of helping others or the need to live in community with other believers. But when such attacks happen, we can be assured that Jesus will be with us, just as he promised: “I have told you these things, so that in me you may have peace. In this world you will have trouble. But take heart! I have overcome the world.” (John 16:33).

Christina Ray StantonChristina Ray Stanton is missions director at Redeemer Presbyterian Church. She is a licensed NYC tour guide who has led thousands of people on tours since 1995, specializing in 9/11 history. In 2017, she founded a nonprofit, Loving All Nations, which helps the world’s poor and vulnerable. Christina has written an award-winning book about 9/11, and over twenty articles on the subject. www.christinaraystanton.com