Astonishing stories of God at work are being shared on social media. Tim Wyatt explains why Christians are being urged to respond with both praise and caution 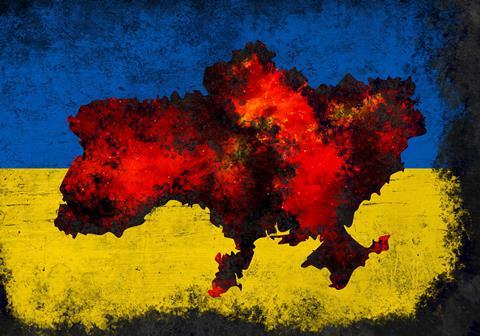 The video begins with a young boy, sitting in the darkness, reading aloud from his Bible by torchlight. In Ukrainian, he recites Psalm 31: “In you, Lord, I have taken refuge…” The film cuts to more children, men and women, each reading a verse from cramped bomb shelters or basements: “…Turn your ear to me, come quickly to my rescue; be my rock of refuge, a strong fortress to save me…” Put together by the Ukrainian Bible Society, the message of hope while under fire from Russian missiles quickly rocketed around the world, eagerly shared by Christians online. “…Praise be to the Lord for he showed me the wonders of his love when I was in a city under siege…” As believers far from the battlefield doomscroll through social media feeds crammed with conflict and tragedy from Ukraine, stories of the church’s resilience and God at work have provided pinpricks of light in a dark time. “…Be strong and take heart, all you who hope in the Lord.”

Oldi Morava, from Bible Society, said the psalm had become a “key scripture” for all Ukrainians as they put their trust in God despite the invasion. The centrality of prayer became a touchstone of the Ukrainian church’s response to the war. Mission Without Borders, a Christian charity working in Eastern Europe, reported the words of Ukrainian staff member, Volodia, who was confident a spiritual army worldwide could defeat the Russian troops now pouring into his country: “They’ve started a full-scale war and we Christians have started a full-scale prayer. They are 150,000 and we are 2.5 billion Christians all over the world. Guess who is going to be victorious.”

Praying for Ukraine has energised Christians following the conflict from afar. In the face of daily news bulletins full of despair, many have been driven to participate in something positive by praying. At any one time, hundreds of thousands are using the hashtag #prayforukraine across social media platforms. And bit by bit, these prayers are seemingly answered. The stories of miraculous provision and rescue are already countless. Sharyn Borodino from YWAM Ukraine shared how her husband received a call from a maternity hospital near Kyiv which had been bombed. He made a list of the specific items they required, and as he walked out of the building, a truck from a YWAM base in Romania arrived. “The van was full of humanitarian aid, including every item that was on the list from the maternity ward,” she wrote.

bit by bit, prayers are being answered

Other testimonies include how eight kilograms of pasta is being multiplied, daily, to feed more than 150 people at another YWAM site in Kyiv. Others have shared videos of unexploded missiles right next to homes or people. In the Black Sea, a large storm raged for several days, preventing Russian warships from getting close to Ukrainian ports there.

Anatoliy Raychynets, from Ukrainian Bible Society, has also spoken of how God is working among the Ukrainian people. While distributing bread in a Kyiv park, a lady noticed he also had Bibles in his car. She asked for one, and others soon followed. One man in his 70s declared God’s word to be even more precious than daily bread. “I never prayed before. I have never been to church, never read the Bible. But now it’s time to come closer to God,” the man reportedly said.

Peter Crumpler, a Church of England minister and communications professional, said the instinct of many believers has always been to ask: “Where is God in all of this?” when faced with bad news. “So when we see or hear these stories of God at work, we want to seize upon them,” he explained.

Another Christian PR expert, David Taylor, said he had been moved by the stories and videos of God on the move amid the carnage of war. And the ways in which the Church has mobilised to support people in Ukraine has been almost as prominent online, he said, noting Christian aid agencies had flown in to build field hospitals on the ground, while others had set up welcome groups and lobbied for Ukrainian refugees back home.

He suggested the very online nature of the current crisis had turbocharged the natural tendency of Christians to respond to war by sharing testimonies of miracles and perseverance. The highly tech-literate Ukrainians were effectively livestreaming their resilience and tragedies via smartphones, turning it into a truly global event. “We’ve also got the fact that Ukraine has a lot of Christians and their Christian history stretches back a very long time,” he added. “And so it’s ripe for stories about God’s movement.”

But, as ever with the internet, not everything on TikTok or Instagram is entirely reliable, Christian or not. A famous early piece of misinformation dressed up as encouragement was an image of Ukrainians kneeling in the snow, supposedly praying against the Russian invasion. However, it later emerged the image dated from at least 2019 - and possibly earlier. Similarly, several videos of apparently miraculous salvation from missiles which failed to explode or narrowly missed killing bystanders have also been debunked as old or fake.

Crumpler said it was vital that Christians did not let their desire to see God’s good news breaking through the darkness mean they became suckered into sharing misinformation. “I’m conscious of my own motivation in this, that I want to see good news, I want to see things that inspire me,” he reflected. “And therefore I have to be as discerning as I can in this situation.” Believers must walk a tightrope, he said, holding onto God’s ability to do miracles while not allowing themselves to believe absolutely everything tagged with #prayforukraine. “As a general rule for us all: be sceptical – question what we’re seeing – but don’t be cynical, not to assume that everything is wrong. God is at work.”

question what we’re seeing – but don’t be cynical. God is at work

Taylor said the old adage about a lie getting around the world twice before the truth had even pulled its shoes on was even more true in our current social media age. Christians must model a different way of interacting online, he said, one which takes the problem of fake news seriously. The Church needed to become a “movement of integrity and honesty” online, which means both being careful not to share untruths – even ones which aim to encourage and inspire – and also openly apologising and retracting when mistakes are made. For those getting their news of God at work in Ukraine via WhatsApp or Facebook, take it all with a “bowl of salt rather than a pinch,” he added. Do your own research to try and verify stories and testimonies first. Resist the obsession with breaking news and instead “wait for the slow news journalists to confirm it properly.” “And if you do feel an urgent need to understand what God is doing, sit down and pray that God’s will be done. You don’t have to consume news articles to know that God is on the move.”

Crumpler agreed: slowing down, consuming less news, being cautious, checking the reliability of a source and questioning intentions would all ensure people of faith do not fall into misinformation traps. However, in the end, many stories of God on the move will never be verified, he admitted. When it comes to the miraculous multiplication of food, perhaps the exact quantities or how many were fed will never be verified, he said. But the effort of God’s people to feed those in need was “as much as a miracle to me,” he added.

Taylor agreed, arguing it never hurt to give God glory for something good. However, when the dust had settled in Ukraine, he admitted he worried about the impact of repeated debunkings on Christians newly emboldened to believe in a God of miracles. “If it then turns out to all be false, it’s the boy that cried wolf, but the opposite,” he reflected. “We keep being told God did this, God did this, God did this. And then it turns out, that didn’t happen… boy, is that going to be a letdown to a lot of people.”