The ministry of intercession is not a specialist subject, but something for every Christian, says Mark Alexander Buchanan as he shares some pointers on how we can lift up the nation of Ukraine in prayer 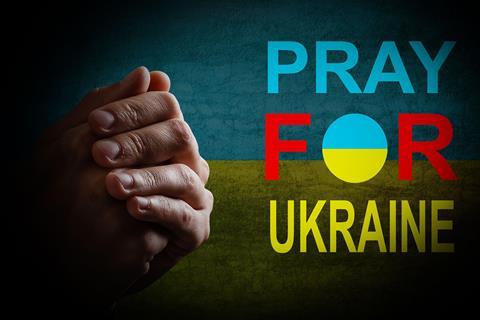 Just as we are beginning to emerge from the turbulence of the global pandemic, we are faced with a new crisis, the Russian invasion of Ukraine.

The moral case against Putin’s actions is stark. This invasion is an unprovoked outrage, and a significant percentage of the Russian people do not agree with it.

Our leaders are making fine speeches but there is very little they can actually do without triggering a European war. Ordinary men and women all over the world are therefore left with a strong sense of injustice and anger about what is happening.

The eruption of social media posts on this subject is an eloquent testimony to people’s frustration and desire to “do something.” Deep down, we know that changing our Facebook profile pictures won’t really make any difference to the situation…but what else can we do?

Well, there is one, very powerful thing we can do. Pray. Or, to be more accurate, we can intercede.

Intercession is a determined, detailed, perseverant representation of the needs of a group of people to God.

As human beings, we have a vote, we have access to our MPs, we have time and we have bank accounts. These are all resources we may use to try and do something for the people of the Ukraine. As citizens of heaven, we have a supernatural weapon at our disposal, the ministry of intercession. This is not a specialist subject: It is something we can all do.

At its simplest, intercession is the act of taking upon ourselves the needs of others and bringing those needs to God’s attention through prayer. We stand in God’s presence and ask him to help the people we care about. We do this because we have faith that God is control of all things and that he is capable of doing anything he wants to. Our confidence is not based on our own estimates of how likely it is that God will act. It is based on our understanding of his will and his power.

1. Pray in faith (step outside your intellectual assessment of the situation)

The Bible tells us that prayer works.

In James 5:16-18 we are reminded of the effectiveness of Elijah’s prayers: “The prayer of a righteous person is powerful and effective. Elijah was a human being, even as we are. He prayed earnestly that it would not rain, and it did not rain on the land for three and a half years. Again he prayed, and the heavens gave rain, and the earth produced its crops.”

2. The big picture may be set, but you can always pray about the details

In Mark 13, Matthew 24 and Luke 21, Jesus warns his disciples about the coming destruction of the Temple in Jerusalem.

This warning is mostly a statement of fact about what is to come, but, in Mark 13:18 Jesus advises his disciples to “Pray that this will not occur in the winter.” He does not tell them to pray that the Temple will not be destroyed because that was already fixed in his plan, but he does leave room for them to pray for the wellbeing of the people caught up in those events.

So, we may not have the faith or the permission to pray that Russia will halt its invasion, but we can certainly pray for the safety of the innocent people caught up in the war.

3. Don’t stop praying until it’s over

1 Thessalonians 5:16-18 exhorts us to “Rejoice always, pray without ceasing, give thanks in all circumstances; for this is the will of God in Christ Jesus for you.”

Prayer is almost never a one-shot deal. Perseverance is a big part of intercession. It is the proof to God, Satan and the heavenly hosts that we are serious about what we are asking for. It is also a means of collaborating with God to make sure his will is done on earth as it is in heaven.

The prophet Daniel prayed steadily for 21 days, without any apparent success. It was only on the 24th day of his fasting and praying, that a messenger came and explained that the answer to his prayers had been withstood by a powerful spirit called the Prince of Persia.

We humans are not called to do battle with those powerful spiritual warlords, but we are called to keep our end of the prayer-line open while the heavenly hosts secure us the answers and relief that we need.

Jesus said, “Where two or three gather in my name, there am I with them.” (Matthew 18:20) Praying together increases our courage, gives us a greater sense of God’s presence and significantly boosts our stamina.

There is also a mysterious, supernatural multiplying force that is liberated by agreement and unity. Psalm 133 is a beautiful reminder that God commands his blessing on those who walk together in unity.

So let’s pray for the people of Ukraine at our tea tables, at our coffee meets, on our family Zoom calls and while we do the washing up.

5. Remind yourself who you are praying to

1 Thessalonians 5:16-18 tells us to “rejoice always and give thanks in all circumstances.”

Rejoicing and thanksgiving remind us that the God we are praying to is not a mute idol but a living, powerful and active Lord. So as we ask for his intervention in the Ukraine, let’s follow the pattern laid out in Psalm 100:4 and “Enter his gates with thanksgiving and his courts with praise; give thanks to him and praise his name.”

6. Remind yourself who is really in charge

God has delegated earthly power to earthly rulers but he is in ultimate control. Psalm 2 says that men cannot do anything that God has not allowed: “Why do the nations conspire and the peoples plot in vain? The kings of the earth rise up and the rulers band together against the Lord and against his anointed, saying, ‘Let us break their chains and throw off their shackles.’ The One enthroned in heaven laughs; the Lord scoffs at them. He rebukes them in his anger and terrifies them in his wrath, saying, ‘I have installed my king on Zion, my holy mountain.’” (1-6)

7. Visit a pile of stones

The Israelites of the Old Testament had a tradition of building piles (cairns) of stones as reminders of agreements they made between themselves and as memorials to the great deeds God did for them. Joshua 4:1-7 tells of how Joshua commanded a pile of 12 stones to be built to commemorate the miraculous crossing of the River Jordan. That pile of stones stood for generations as reminder, to those who came later, of God’s tremendous power. In our modern, digital age we have websites like the Wall of Answered Prayer to do that same job for us.

One of my favourite stories of answered prayer concerns the national prayer meeting called by King George VI on May 26 1940. At that time, France had fallen to the Nazis, the British army was in full retreat and all hope seemed lost. Millions attended prayer meetings in churches up and down the nation and the queue to get into Westminster Abbey was more than a quarter of a mile long.

In the following days, three miracles took place: Hitler halted his advance, a huge storm on May 28 meant that the Luftwaffe were unable to fly and finally an unusual calm fell on the English channel, enabling thousands of small boats and ships to rescue 335,000 British troops.

The war itself did not stop but the rescue of those troops meant that Great Britain was able to continue its defence and eventually to prevail against the forces of Nazi Germany.

So let’s engage in serious, faith filled steadfast prayer for the people of the Ukraine. Let us deploy the powerful, spiritual weapon of prayer and let us witness God’s incredible ability to execute his will, regardless of the plans of men.

In these significant moments in Europe’s history, Premier is encouraging Christians to join with us in prayer for the conflict in Ukraine. Sign up here to receive daily prayers via text.

Mark Alexander BuchananMark Alexander Buchanan has a twin calling to serve both the business world and the Church. He is a former Bible smuggler, church planter, and Bible teacher in addition to his work as an international business consultant. For more information visit markalexanderbuchanan.com, where this article first appeared