Should Kanye West really have won every Christian and Gospel category at this year’s Billboard Awards? That’s the wrong question to be asking, says Tom Read 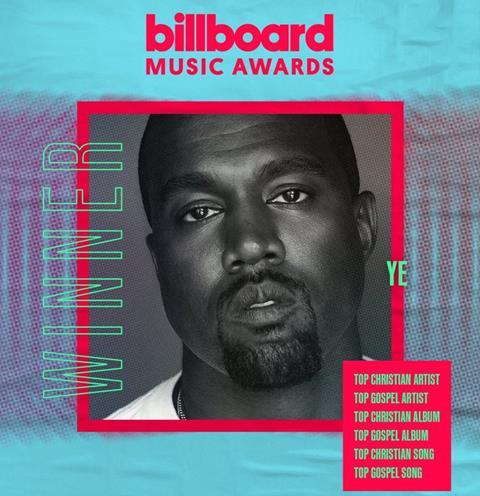 Kanye West won all six of the Christian and Gospel categories at this year’s Billboard Music Awards and this raises some important questions relating to art and creative expression in the Church.

The first question that might come to mind is whether it’s a bit of a stretch to award Kanye West the title of Top Christian Artist. To me, the answer is: yes, and no. Yes, Kanye does not usually operate in the same spaces as the other nominees in these categories. Lauren Daigle, for KING & COUNTRY, and Elevation Worship have dedicated their careers to making faith their main subject matter, and Christians their main audience. But this should not exclude a mainstream megastar like West from the running.

The issue of whether or not he should be considered a Christian artist is a moot point. Art and music aside, once we start assessing ‘how Christian’ someone is or isn’t, we have entered dangerous territory; so let’s not do it. West’s recent musical releases happen to be about his Christian faith. His audience received this contribution with enthusiasm. He earned these accolades fair and square. The Billboard Awards are based on popularity (sales and engagement) not academy votes.

The bigger question to consider is why a mainstream megastar cleaned up at the awards. What does this say about the current state of Christian music and about the wider role of art in the Church?

Kanye has made music about his faith that is fresh. It doesn’t sound like existing Christian music. He is a musical genius expressing his own, unique faith in his own unique way. He is not constrained by the demands of the religious market because he is not catering to it. This is more than most artists operating in the Christian arena can claim.

The role of the artist (scared and secular) is to use their authentic voice to express their lived experience. In reality, artists are also tasked with the job of staying financially viable. To this end, creativity can often be compromised in the name of profit.

Rather than scrutinising the artists, we are better off turning our gaze to another two parties: the industry and the consumers. The Christian music industry is notoriously risk averse. As a genre, it can be samey: filtered, watered down and often overly-contrived. A proven formula exists, and we seem happy to keep accepting the sure thing, even though it’s getting a bit tired - or worse - lacks artistic integrity. The emphasis seems more on market restraints and less on platforming authentic, unique creative voices. Kanye West is not bound by any of the restraints or the rules that many Christian artists follow out of necessity, and it shows in his music.

Christian music can be samey: filtered, watered down and often overly-contrived

Although it doesn’t always feel obvious, as consumers, we dictate demand. It is up to us to vote with our time, money and engagement in order to provide a platform for artists. It takes effort, but it can be done. If you need a recent example of demand shifting an entire industry, just look at plant-based foods. The Church also needs to step up and provide space for music that doesn’t fit neatly into the Sunday-morning-worship box.

The good news is that there are a new generation of creative, solid, independent artists expressing their faith experience in fresh and exciting ways. These are the artists who insist on keeping the focus on creative expression. It used to be hard to find interesting Christian music but, with the advent of streaming services, it’s now easier than ever before to discover new artists. Just a simple search for ‘indie-Christian’ on any streaming service will introduce you to thousands of new songs to choose from.

The nature of indie musicians is that they won’t usually get a look in with the big name awards, and that’s fine, because they are not catering to the mass market. They are doing the thing that artists are meant to do, creatively, authentically, faithfully.