3 things the Bible says about war

The Bible doesn't give us the simple answers we crave, especially when it comes to the war in Ukraine. So what does it say? Rev Mark Woods looks at three challenging Old Testament passages 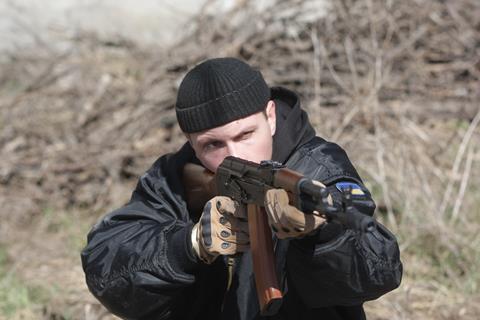 A man attends a free training for civilians in handling weapons, amid the Russian invasion in Ukraine, in Odesa, Ukraine

Ukraine is under attack, in scenes that recall the battlefields of 1944. In times of war, the instinct of Christians is to turn to the Bible for answers to some profound questions. Why is this happening? What should we do? How should we pray?

We know war is terrible and wrong, but most of us think that if our country is invaded we ought to resist. If the fighting is in someone else’s country a long way away, we’re less involved but perhaps more conflicted. We doomscroll news feeds, feeling guilty at being fascinated and horrified. We learn, thanks to instant social media, what ‘resistance’ means, and the sight of wounded children takes some of the shine off that noble concept.

And the Bible is not as much immediate help as we would like it to be.

In the Bible, warfare is entirely normal: "In the spring, at the time when kings go off to war," says 2 Samuel 11:1. It is sometimes taken to extremes, as in the conquest of Canaan. The book of Nahum has some of the most exhilarating poetry in the Old Testament, and it’s a victory song that openly rejoices in the slaughter of large numbers of Israel’s enemies. "The LORD is a warrior", says Exodus 15:3 bluntly.

The Bible commands us not to murder, but it doesn’t tell us war is always the worst option. And yes, one day people will beat their tanks into tractors (see Isaiah 2:4), but that day is not yet. In the meantime, then, what does the Bible say to us today?

First, the Bible enlightens us. It reveals our deepest motivations and the sickness at the heart of cultures and civilisations. In Judges 11, Jephthah is a mighty warrior, the outcast son of a prostitute and the head of a band of outlaws, to whom the elders of Gilead turn to deliver them from the Ammonites. He duly does so, and promises to sacrifice the first thing that comes out of his house to meet him on his victorious return. It is his daughter, and he keeps his vow: she is given two months to ‘roam the hills’ with her friends, and then he kills her.

Without a word of explicit condemnation, the Bible invites us to ask why he does it. "I have made a vow to the LORD which I cannot break", he says (v35). But why not? Perhaps his hard men will no longer respect him if he does. Perhaps his authority will be compromised. Perhaps he is locked into a pattern of behaviour that he can’t break. He needs to be feared, and a man who would kill his daughter would do anything. Perhaps he does it not out of a misguided sense of duty, but out of a twisted craving for power and a fear of losing it. An entirely innocent victim is sacrificed for selfish reasons under the cover of sacred duty (while God, surely, is appalled at what’s done in his name). And of course, once such a sacrifice is made, acknowledging that it was unnecessary is too terrible to bear; so this blasphemous extremism is embedded deeper in the psyche and the culture.

It isn’t the warmakers who get to construct the visible sign of the presence of God in the world, but the peacemakers.

The parallels with what’s happening in Ukraine aren’t exact – and perhaps that’s partly the point. The Bible asks us to work, to think things through. In this case, it challenges President Putin and his supporters to examine their motivations and their reasoning. Their sacrificial victims are an entire nation. It doesn’t have to be this way.

Second, the Bible warns us. It is deeply self-aware, and it wants us to be as well. Psalm 137 contains two verses which are almost unreadable: "O daughter of Babylon, doomed to destruction, happy is he who repays you for what you have done to us – he who seizes your infants and dashes them against the rocks."

This Old Testament beatitude promises bliss to those who murder children in revenge for murdered children. If we recoil in horror from such a text, it’s because we are at a distance from those events. But for those living through the heat of the war in Ukraine, or the war in Yemen, or the long wretchedness of the Congo conflicts, these words are instantly comprehensible. When what we most love is taken from us, with a brutality either cruel or casual, the desire for revenge rises almost unstoppably. We want others to suffer as we have suffered, and in warfare the potential for a spiral of vengeance is almost unlimited. In just a few words, the Bible shows us the risks we run of descending into a moral abyss. It is not just Russians who are in peril here, but Ukrainians too.

Thirdly, the Bible honours peacemakers. The following story from 1 Chronicles shows us more of the heart of God towards violence.

All of these stories are challenging. Jepthah’s encourages us to probe motivations for violence – and we’re greatly mistaken if we think we can assume that it’s only our enemies’ motivations that need to be probed. Psalm 137 warns us of the consequences of giving in to our darkest instincts. Chronicles reminds us that the Kingdom of God is not built by violence, and that it’s the peacemakers who are called blessed.

And the Bible, as we’ve seen, is much more than a rule book with an instant solution for every dilemma. In reading these stories we can see the truth of Hebrews 4:12: "For the word of God is alive and active. Sharper than any double-edged sword, it penetrates even to dividing soul and spirit, joints and marrow; it judges the thoughts and attitudes of the heart."