The religious dimension of Putin’s invasion of Ukraine explained

Putin is not a madman. He has his reasons, and some of them are religious, explains Martyn Whittock 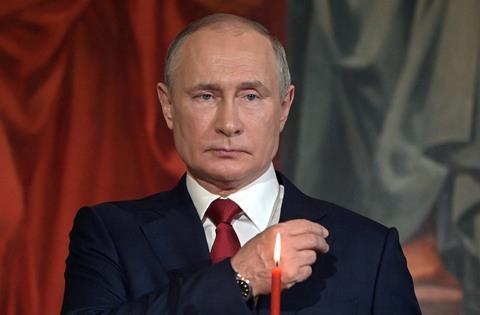 The terrible events in Ukraine are causing many to ask: Why is Putin doing this? For it is clear that – regardless of the sanctions and the expenditure of Russian blood and treasure – the Russian leader and the siloviki (people of force) who surround him were determined to start this war, and now to pursue it to the bitter end.

The driving forces behind it, that gain most attention in the Western media, are: hankering after restoring the lost empire of the Soviets and the tsars; fear of further eastern expansion of NATO; opposition to the growing influence of the EU and its democratic and law-based principles in Moscow’s backyard (given the authoritarian nature of the Putin regime); desire to crush a democratic state which embodies principles alien to the present regime in Russia; an attempt to rally support for Putin as the coalition of the dissatisfied grows in Russia; the desire of an ageing authoritarian to stamp his mark on Russian history as the restorer of ‘lost lands.’

All these issues help explain Putin’s decision to launch an all-out war on Ukraine, regardless of the cost. However, the factors driving this include others that go even further into the ‘deep story’ of Russian identity. This stretches back to the creation of the first ‘Rus’ state (‘Kiev Rus’) in the tenth century and its conversion to Orthodox Christianity. Despite the later shifting of the centre of gravity of Russian political identity to Moscow (later in the medieval period), Ukraine has a foundational role in that ‘deep story.’ Yet, the relationship with Russia (Ukraine was brought under tsarist rule from the 17th century) has often been very painful. Russification and the suppression of independent Ukrainian culture occurred under the tsars and then later under Stalin. A brief period of Ukrainian independence, after the fall of the tsar in 1917, was ended when the Red Army brought Ukraine under communist rule. This rule included the deaths of millions of Ukrainian peasants during Stalin’s collectivisation of agriculture in the 1930s. In 1991 Ukraine declared independence. For many Russian nationalists this was more than simply the loss of a valuable region; it represented a failure to retain a place that was deeply interwoven into Russian self-identity. And, in the post-Soviet world, this increasingly came to be expressed in a fusion of nationalist and Orthodox language.

Putin (president of the Russian Federation since 2000) has frequently referenced the Orthodox Church as representing an essential feature of Russian identity. In return, the church leadership has framed the Kremlin as the defender of Russian culture and of Russians living outside Russia. In 2012, Patriarch Kirill – head of the Russian Orthodox Church – described the Putin era as “a miracle of God.” Since then, Putin has increasingly positioned himself as a defender of traditional Orthodox Christian values in a world of turbulence. However, the nature of authoritarianism in modern Russia is that all institutions are subservient to the agenda of the Kremlin.

A fusion of nationalism and Russian Orthodoxy has clearly occurred

In 2015 Putin justified his recent annexation of Crimea, from Ukraine, by asserting that Crimea has “sacred meaning for Russia, like the Temple Mount for Jews and Muslims,” and furthermore, that Crimea is “the spiritual source of the formation of the multifaceted but monolithic Russian nation.” He added: “It was on this spiritual soil that our ancestors first and forever recognized their nationhood.” A fusion of nationalism and Russian Orthodoxy has clearly occurred, along with a very particular interpretation of the arc of Russian history. Even if viewed as more opportunist than sincere, the language is striking and suggests it forms a part of Putin’s form of Russian nationalism.

In 2014, as Russian-backed rebels sought to establish a separate political identity in the eastern Ukrainian region of the Donbas, one priest claimed that Ukrainian forces and those supporting them in the West were seeking “The establishment of planetary Satanic rule.” Furthermore, he claimed: “What’s occurring here is the very beginning of a global war. Not for resources or territory, that’s secondary. This is a war for the destruction of true Christianity, Orthodoxy.”

All this reveals that the invasion of Ukraine – while primarily driven by Russian nationalist geo-politics in the post-Cold-War world – is also rooted in an apocalyptic-nationalism. Sanctions are unlikely to defuse that. Only regime change in Russia seems capable of that.

Martyn WhittockMartyn Whittock is a Licensed Lay Minister in the Church of England. As an historian and author, or co-author, of fifty-four books, his work covers a wide range of historical and theological themes. As a commentator and columnist, he has written for a number of print and online news platforms; been interviewed on radio shows exploring the interaction of faith and politics; appeared on Sky News discussing political events in the USA; and been interviewed on a number of news platforms regarding the Russian invasion of Ukraine.