‘I’ve been a church leader in Ukraine for 30 years. I’m not going anywhere’

Wayne Zschech has been a missionary and church leader in Ukraine for nearly 30 years and, in that time, he’s seen great spiritual and societal change. But the gospel is still the hope for the nation, he says, and he’s not intending to leave any time soon 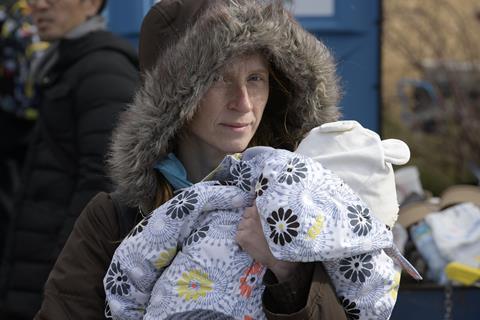 I am heartbroken by this war. How can one not be? It is beyond anything I have seen in the 28 years I have lived in Ukraine, working with Operation Mobilisation (OM).

Twelve days into the war, our church continues to be a halfway house, providing temporary refuge and food for those forced to undertake the arduous journey west to the border with Europe.

After reported attacks near our town, I relocated my family to a safer place. It has allowed me to concentrate my efforts on leading the OM ministry efforts, supporting our teams and coordinating projects in this ever growing crisis. But this is not a situation beyond hope. The Lord is at work in Ukraine.

When I moved to Ukraine from Australia in 1993, I arrived in a post-Soviet country that was less than two years old. I found myself surrounded by the remnants of the Soviet Union, not just physically but also in the mindset of the people. They were a people used to being abandoned, to being in dire straits. Not many people know what Ukraine has been through, but this has been the story of the last 100 years. After years of abuse and instability there was a deep-rooted fatalistic mentality. There was no faith or pride in the community. The attitude could pretty much be summed up as: We’re all going to die anyway so what’s the point? Don’t stick out, don’t take risks.

I found myself pastoring a church with an unemployment rate of nearly 100 per cent. People had no stability, no income and no hope. They were feeding themselves from the potatoes they grew in their garden, with no money to pay for heating when winter came.

But there was also an enormous spiritual hunger. In the 1990s, it truly felt like the fields were white for harvest. We held out the hope of the gospel and saw people give their lives to Christ in huge numbers. It was an incredible place to be. It still is.

As I looked at my congregation and the community, I saw that showing them the love of Jesus went beyond just words. I have always believed that when heaven comes into your heart, it is not far from your heart to your hands. So, I turned to the Lord and asked: “OK Lord, what does the gospel look like in this place?” We began by growing mushrooms in the church basement. God also provided a partnership with McDonalds, turning their used cooking oil into biofuel. We were able to start providing employment in the community and began discipling people in the workplace.

As the political turmoil has continued, we have had to change and adapt. In 2014, war arrived. We lost our contract with McDonalds. But the changes we faced were nothing compared to the seismic shifts about to take place in Ukrainian attitudes. The ‘Revolution of Dignity’ in 2014 was a major catalyst of change in the minds and hearts of the Ukrainian people. It was like the rebirth of the modern Ukrainian nation. The country began to have a sense of pride that hadn’t been in evidence for decades. People weren’t afraid of being punished any more. They were willing to stand up for their freedom.

But, at the same time, the spiritual hunger seemed to dry up. Reaching people for Christ became much harder. With each change, we have turned to the Lord and asked: “OK Lord, what does the gospel look like now?” And God has provided. We saw the miraculous provision of a disused vegetable warehouse to begin a new project, Clean Soul - Clean City, transforming unrecyclable post-consumer plastic into fuel, enabling us to provide work and share life.

War arrived and we asked the same question. The answer wasn’t long in coming. There is desperate need all around us. People have lost everything and are being confronted with death and separation every day. Heaven is never far from their minds and it is never far from our hands or our lips. We are doing everything we can to provide for their physical needs and we are holding out the hope of the gospel even as we cling to it ourselves.

Russia’s invasion of Ukraine shocked people around the world. But, arguably, the group of people it shocked the least were Ukrainians. They have been living in an undeclared war for nearly a decade. They are the bridge between the East and the West. They have been standing in the gap. As Christians in Ukraine, we have also been called to stand in that gap, holding out hope; holding out Christ.

As well as Ukraine, OM has teams in Moldova, Poland, Romania and other bordering counties which are working to provide food, shelter and safe passage for refugees. To find out more and donate, visit: uk.om.org/appeal/ukraine-in-crisis

Wayne ZschechWayne is the Field Leader of Operation Mobilisation in Ukraine, overseeing teams across the country. He is originally from Australia but moved to Ukraine at the age of 17 for what was meant to be a one-year trip. He never left. He is a pastor and entrepreneur. His wife and four children are Ukrainian.