Want to help Ukrainians fleeing war? The last thing they need is your old clothes

Mountains of donated clothes already strew the roads near Ukraine’s borders, rotting in the rain, says charity worker, Caroline Gregory. Organising collections of our cast-offs might make us feel better, but it isn’t the best way to help in a crisis 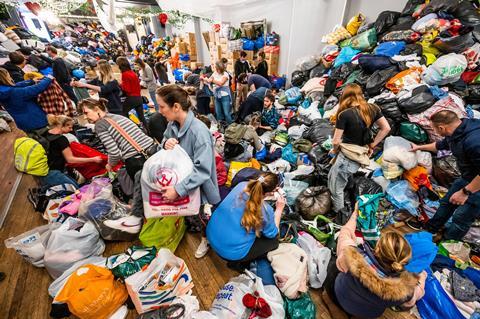 War entrenches people, both literally and metaphorically. It seems to be part of the human condition that we find comfort in having a set viewpoint that falls into one camp or the other. Unconscious bias means we then accidentally bolster our ideas with further evidence. We all automatically veer towards this, including me.

These days, I think the most admirable people are those who are open to changing their minds on significant topics - including Christian ones - after researching more thoroughly, returning to the Bible to work out what it really says, and praying for insight. If you have never changed or developed your viewpoint on an issue, you are saying that your first conclusions, or the first preachers you heard on the issue, were definitely 100 per cent right. I would suggest this is not only unlikely, it is impossible to have that level of insight, unless you are God.

The sort of help that really achieves something is much more boring, difficult and costly

I often picture us arriving in heaven and asking God: “So, what is the correct way to conduct communion?” and him just smiling. We know there are some absolute truths. We also know that we do not need to reduce God to our very human need to neatly box everything. The Bible makes it clear that he is much more interested in how we conduct ourselves, if we do get involved in contentious issues, and that we don’t jeopardise his laws regarding love and peace in the process.

But what does this have to do with the war in Ukraine? In the past two weeks, I’ve seen the majority of people wholeheartedly supporting Ukraine’s efforts to fight against this invasion. To be clear, on this issue I am fully in one camp - and it is the Ukranian one.

A minority, however, extrapolate other related issues into an altogether different viewpoint, one which decries every single action of the capitalist West, in a process now often called out as ‘whataboutery’. This distracting, and disingenuous, technique avoids addressing problems by pointing out other ones. It is a technique loved by Trump, but every politician of every persuasion indulges in it. When asked about wrongdoing or failures within their own party, they respond by pointing out something the other side has or hasn’t done, derailing any useful discussion. Plank in your own eye, anyone?

Concerns range from the way Ukraine has dealt with the separatist region of Donbas, including the far-right inclinations of the notorious Azov battalion (since incorporated into the National Guard of Ukraine), to Western hypocrisy on invading other countries. The outflow of welcome and assistance for Ukraine, from ordinary people right up to those in government, contrasts with our ongoing lack of regard for refugees from other conflicts who have at least as much right to call on our assistance – and, arguably, more.

I believe we can be uncomfortable with some of Ukraine’s past actions while still condemning Russia’s invasion. We can dislike the disparity in how Europe and the UK have responded to this crisis compared to other wars, but still support the efforts to welcome Ukranian refugees. As the ultimately nuanced being, God granted humans a brain also capable of nuance.

Recently, I have seen this desire to sit firmly in one camp in another arena too - one I am personally involved in. Feeling helpless at the plight of Ukraine has caused people to respond in ways which may not, ultimately, be helpful. Groups and individuals with no experience of aid work have begun massive collections of clothing, food and toys. I understand the need to help, but unfortunately, once the juggernaut of collecting aid has started rolling, it is difficult to stop. People are invested. They have called out to their community, been overwhelmed with social media response and praise, felt excitement at the mountains of goods flooding in and felt that buzz we all get from helping others.

Collecting old clothes is not only useless, it actually causes serious problems. In several situations over the years, I have seen the issues caused by massive influxes of donations, and in this current situation, it is even less appropriate. A Ukrainian mother, carrying her possessions in three suitcases and trying to manage her children at the same time, will not be stopping at the border to pick up your grandad’s old holey jumper that should have gone to the charity shop 15 years ago.

Mountains of donations, the majority of them only suitable for landfill or repurposing, are now sitting in halls, churches and garages across Europe. They already strew the roads near Ukraine’s borders, rotting in the rain. Lorries full of ‘aid’ are stuck at borders. NGOs large and small, as well as governmental bodies and embassies, have implored people to stop. Yet, still, the juggernaut rolls on.

The cost of dealing with this aid, let alone transporting it, is immense. Millions of hours and gallons of petrol are wasted in collecting donations, sorting them, arranging travel and transport to Ukraine. Think of the good that money and time could do if it was channelled more appropriately.

Unfortunately, the sort of help that really achieves something is much more boring, difficult and costly. The Bible calls us to help others in sacrificial ways, and sacrifice implies cost - in terms of money, time, energy and even personal peace. It involves research, writing to MPs, applying political pressure, raising money, spending time finding out which organisations are achieving the most, and challenging those who have settled into ways of helping that are not really helpful.

Ploughing ahead with a crisis response that gives what is not really needed is profoundly unbiblical. “Pour yourself out for the hungry” (Isaiah 58:10) is very different from “give them the bit off the top that you don’t want yourself.”

Deserving of the best

Many years ago, a presentation from the International Justice Mission (IJM) left me with many great insights, but one in particular which I have never forgotten: they try to provide the victims of slavery and trafficking with the very best legal help they can. Clients are not fobbed off with the intern who needs experience or the retired lawyer who has time on her hands but is out of date with current law.

It makes complete sense to me. Those in the direst situations surely deserve our best, not our cast offs. “God loves a cheerful giver,” says 2 Corinthians 9:7, not one who is giving things it does not even want itself. When the charities I run sort aid donations, we ask volunteers to consider: “Would I want this myself, or for my child?” and that is the bare minimum.