The recent riots inside Brazil’s government buildings has uncomfortable echoes of the storming of Capitol Hill almost exactly two years ago, and in both cases Christians played a central role, says Martyn Whittock 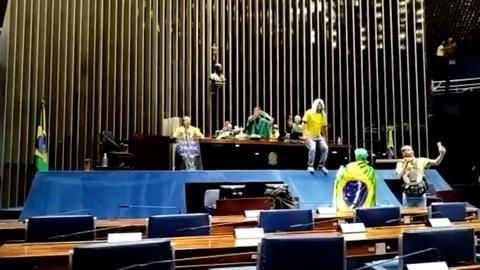 Those responsible were supporters of ex-President Jair Bolsonaro, who refused to accept the results of the recent presidential election, which had handed a narrow victory to Luiz Inácio Lula da Silva. Sound familiar? It should do.

Trump of the tropics

The invasion and trashing of these key places within Brazilian government and democracy occurred just two days after the second anniversary of a similar event: the storming of the Capitol building in Washington DC by a group of right-wing election-deniers intent on violently overturning the results of a democratic election because their candidate – Trump in that case – had lost.

The similarities are clear. Many commentators have described Bolsonaro as the “Trump of the tropics”. And, like the ex-president of the USA, Bolsonaro had led a controversial right-wing government. One that has undermined democratic norms, weakened climate-change responses, opposed Covid restrictions and other emergency health measures, presided over a huge Covid mortality rate, loosened gun controls and primed his supporters prior to October’s presidential election to not accept electoral defeat by predicting (without evidence) that there would be significant levels of electoral fraud.

Like Trump, Bolsonaro lost after one term in office and, again like his fellow populist to the north, predictably refused to accept defeat in a presidential election. So far, so Trump.

Despite the similarities with Trump, there are some significant differences between the two countries. Foremost, is that Brazil has a more complex democratic history than the USA. Its recent past was marred by a brutal period of military dictatorship from 1964 to 1985, which causes some to look nervously at the attitude of the army and police at times of national turbulence and right-wing protests.

They are right to be nervous. Bolsonaro has long shown a disdain for the norms of democracy and open support for authoritarianism. In a country with a recent history of military violence, this has given understandable cause for concern over the strength of Brazilian democracy in the face of authoritarian forces.

Another difference is that Bolsonaro – in a post on Twitter some six hours after the violence broke out – condemned the attack on government buildings and denied responsibility for encouraging the rioters. Trump has never gone that far when it comes to the events of 6 January at the Capitol.

The role of evangelicals

History and contemporary politics remind us that many people are prepared to support those who undermine democratic norms and the rule of law if they feel it is a means to an end. Rising crime, fear of economic problems and anxiety concerning the political left pushed many towards Bolsonaro in the past. Resentment at Covid restrictions caused many others to support his brand of populist libertarianism. However, faith is also in the mix.

While Bolsonaro was raised a Catholic, he has enjoyed a high level of support from Brazilian evangelical Christians, who make up 29 per cent of the nation’s population. His wife is an evangelical. Those termed “evangelical” in Brazil are theologically and politically more diverse than the monolithic phenomenon that is US evangelicalism. Nevertheless, his support among evangelicals runs at about 60 per cent; below Trump’s score of 81 per cent but still highly significant.

In the past, Bolsonaro has used the slogan: “Brazil above everything, God above all.” The first part is a familiar appeal to nationalism that historically has often trumped (no pun intended) the New Testament internationalism that should dominate Christian spiritual DNA. The second part refers to his position on social ‘red button’ issues that cause anxiety among many evangelicals: he opposes abortion rights, drug use, gender ideology, gay rights, social diversity etc. This appeals to Catholics too.

To achieve these goals, many evangelicals in Brazil (as in the USA and elsewhere) have been prepared to tolerate an undermining of democracy and the rule of law as acceptable collateral damage. They may even feel that God will overlook this, compared with the social victories. This is dangerous theology when it leads to, or accepts, political violence and authoritarianism.