The uncomfortable truth about Christian involvement in the Capitol riots

As the committee investigating the 6 January 2021 attack holds public hearings to announce their findings, Jared Stacy says America needs to go beyond political investigation and look at the ungodly theology which motivated the riots 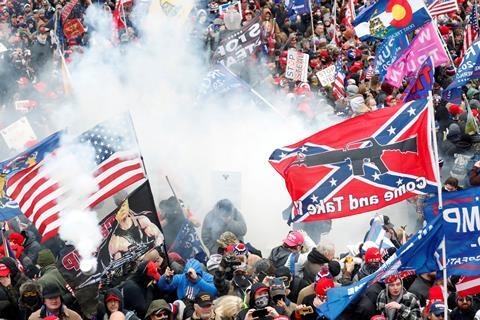 Tear gas is released into a crowd of protesters, with one wielding a Confederate battle flag that reads “Come and Take It,” during clashes with police at the U.S. Capitol Building in Washington, U.S, January 6, 2021. (REUTERS/Shannon Stapleton/File Photo)

20 million people watched last week’s congressional committee hearing in prime time. Revelations included President Trump suggesting Vice President Mike Pence should be hung. The hearing ended with never-before-seen footage showcasing mob violence. That night, 20 million Americans were left with a final shot - the flag of Trump and the Christian flag next to one another (see right). 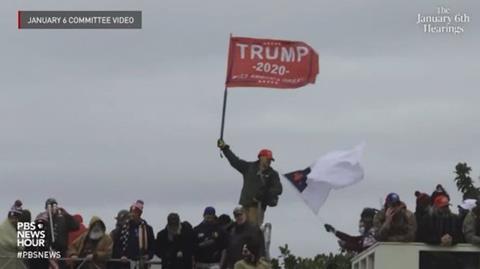 Stanley Hauerwas says, “memory is a moral exercise”. There’s something profoundly righteous in an act of remembering rightly. The Committee is performing this act for American Democracy. But who will do this for the church in America?

No Congressional committee can address the theology of January 6. Politicians can make policies. But the body of Christ in America needs prophets.

I’m afraid we’ve just perfected the No True-Scotsman fallacy (wrangling our way out of the problem by claiming the people waving Christian flags on the hill weren’t “real” Christians). Alternatively, we try and chalk it up to a minority of militant zealots. This won’t do.

Earlier this year, a poll found nearly 60% of white evangelicals believed the election was stolen. That means most evangelicals in the US have bought into ‘The Big Lie’, which was the animating claim of January 6. Today, 1 in 5 Americans and nearly a quarter of white evangelicals believe at least one part of the destructive Q-Anon conspiracy theory. The truth is uncomfortable: a substantial proportion of American Christians have bought into the lies which fuelled what took place on January 6.

Last year I witnessed the riots live from my home just 40 miles away from Washington DC. I’d already resigned my job as a pastor. A week later we moved to Scotland to study in Aberdeen. But that day, I recognised the Christianity of January 6 in my own backyard. I had already seen the veneration of Trump, wrapped in a veneer of racism and fuelled by a mythologised nationalist zeal for a Christian America. In my backyard these came packaged in a piety that made them seem respectable, not radical.

A quick Google search will show you lots of radical pastors across America. They have viral sermons on conspiracy theories, stolen elections, and godless Democrats. But “respectable” church communities say “we don’t talk politics”. You won’t hear radical political sermons at these churches. But you will find the pulpit wrapped in privileged piety while the US and Christian flags flank it on the platform. The ‘respectable’ pulpit observes radio silence while right wing pundits make waves of paranoia: the war on Christians, the collapse of white America, conspiracies. The pulpit of ‘respectable’ churches rarely addresses the lies which congregants hear spouted on Facebook and YouTube.

There’s a double standard in America. In summer 2020, our church attended a prayer gathering of local churches to rally around racial reconciliation. Christians knelt in prayer for 8 minutes and 15 seconds, the amount of time George Floyd was pinned to the ground. Afterwards, a pastor I served with said the act was “too political”. Yet there’s no such conflict in marching in DC for the unborn. Large sections of the US church are pro life when it comes to abortion, but indifferent when it comes to the lives of our black brothers and sisters.

How can I quickly convince anyone that the Christianity of January 6 is more influential beyond those involved that day? I don’t know. Certainly many Christians resent the implication. They’re quick to deflect from Christianity’s influence on the Capitol Riots by focusing on the violence of summer 2020. This says more about your ideology than theology.

Truth telling is one way we heal, the other is refusing to hold others in contempt. In truth, I am a product of these spaces. I’m implicated in these things, actively disentangling, repenting and aiming onward. But some who are implicated by this act will claim they are being attacked or held in contempt. That’s not my desire. I may not be able to persuade, but I can provoke like I’ve been provoked. Not to anger or contempt, the world has enough of that. I want to provoke a bit of doubt. The kind that invites us to a curiosity that questions our categories and commitments. Those that rest in a history of America conditioned by white supremacy and Christianity. These categories and commitments are often marked “do not touch” since they’ve been labelled “biblical”. But if January 6 reminds us of anything, it’s that not everything called “biblical” is of Christ. We must condemn the influence of the god who lost on January 6, and publicly bear witness to the living Christ, leading lives marked by faith not paranoia, by hope not cynicism, by love not hate. And that all involves not just remembering, but repenting.