Rowan Williams is wrong. Kirill should not be kicked out of the World Council of Churches

While the Russian Orthodox Church’s endorsement of the invasion of Ukraine is abhorrent, keeping communication open has a better chance of changing hearts and minds than isolation, argues Jonathan Edwards 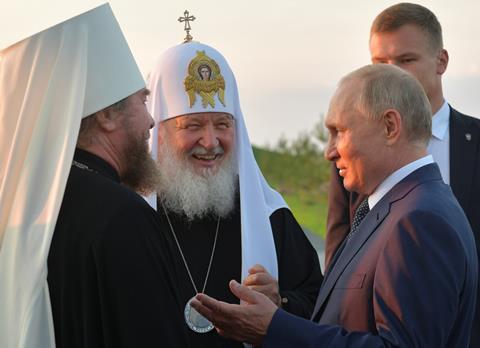 There have been some powerful voices urging the World Council of Churches (WCC) to consider expelling the Russian Orthodox Church. The former Archbishop of Canterbury, Lord Rowan Williams, has been foremost among them and he is a man who should be listened to with care.

Williams is a Russian speaker and an expert on the Orthodox Church. He told Radio 4’s Sunday programme: “The case for expelling is a strong one, and I have a suspicion that some other Orthodox churches would take the same view. Many in the Orthodox world feel that Orthodoxy itself is compromised. The riot act has to be read. When a Church is actively supporting a war of aggression, failing to condemn nakedly obvious breaches in any kind of ethical conduct in wartime, then other Churches have the right to raise the question and challenge it — to say, unless you can say something effective about this, something recognisably Christian, we have to look again at your membership.”

I have every sympathy with this view, but I believe it to be mistaken. There is no question that Russia’s onslaught on Ukraine has been horrific, and the fact that the Russian Orthodox Church has strongly endorsed the aggression is deeply offensive, but I don’t believe that pushing them out of the WCC will help. The facts are unquestionably appalling. Patriarch Kirill, the head of the Russian Orthodox Church, has aligned himself completely with the Russian president, Vladimir Putin, and given him every encouragement.

For most of the past century, the Russian Orthodox Church has been sidelined - and often persecuted - by the nation’s rulers. But in the last few years they have developed a close relationship, within which they have shared a united hostility to Western decadence. Preaching in the new military cathedral in Moscow recently, Kirill urged Russians to pray for “multiplying the power of our armed forces” and said that he wished to remind all soldiers of “the historical importance of the present moment.” He called those caught up in the Ukrainian invasion “peoples of Holy Russia”, pushed into “internecine strife” by outside forces which had made it essential for military personnel to lay down their lives “as the word of God testifies”.

There can be no doubt that we need to register our abhorrence of these views, but I seriously question whether expulsion from the WCC is an effective way of doing so. What needs to happen is for a conversation to take place - within which our absolute dismay is clearly communicated. Our prayer must be that Patriarch Kirill, and his Church, will change their views. The danger with ostracising them is that, in their isolation and without the moderating influence of others, they are likely to become even more extreme in their thinking.

The question, in a less extreme form, is one that we face continually as we respond to views that are different from our own. Tough as it may be, the conversations need to take place. We need to be free to share our convictions and gracious enough to listen to views with which we profoundly disagree.

The WCC deliberately brings together people from a wide range of political regimes and cultures. They offer a round table at which Christians of every background can meet, pray and talk together. There will never be a moment when everyone agrees about everything. And there will, inevitably, be moments - such as this one - when the views of one part of the Church will be deeply objectionable to others. I believe that the WCC needs to bring everyone together, however sharply opposed they may be. The heated debate that is bound to take place is surely much more likely to lead to change than expulsion and isolation will.

Jonathan EdwardsJonathan Edwards is Premier’s ambassador to churches. He writes the daily devotionals for Premier's Voice of Hope magazine and Premier Radio's Be Still and Know slot. He was formerly the general secretary of the Baptist Union of Great Britain.