Pavel Stroilov was born in Russia and baptised into the Russian Orthodox Church. But Putin does not speak for all Russians, and the Church must remember that it serves Christ first, not its political leaders, he says 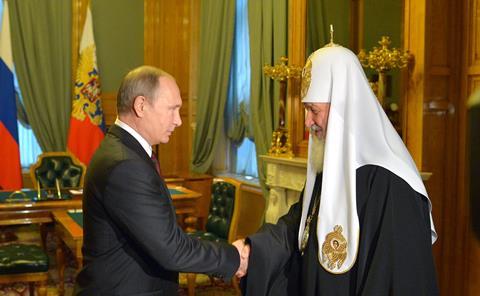 Vladimir Putin and Patriarch Kirill I of Russia

They talk about the fog of war but, to many of us, the first week of Putin’s total war on Ukraine has brought terrible clarity. We might have debated before whether Putin was as black as he was painted, whether his rhetoric about the ‘tragedy’ of losing the Soviet Empire might be just talk, whether his criticisms of the West had a point, and whether he was genuinely a force for ‘conservative Christian values’ and therefore for good.

Personally, I have never had doubts about the fact that the former KGB officer is a professional liar and murderer, and his pretence of converting to Christianity, without even a hint of repenting his bloodstained KGB record, was a rather hasty disguise. But then, I am a special case, having had to flee Russia for my life after my research into Soviet secret archives caused contradictions with Putin’s version of history, such as the myth about Nato breaking their promise to never expand to the East.

Now, at last, the daylight has broken through. Putin has cast off his mask of a Christian prince. He addresses his troops as “comrades”, ordering them to re-take Ukraine as a stray administrative unit of the USSR. The church bells ring in Ukrainian towns to sound the alarm against incoming enemy strikes. Tearful Russian prisoners of war recall, on camera, how they were forced into Ukraine by threats of execution, or tricked into invading on the pretence of it being only a training exercise. Ukrainian heroes sacrifice their lives to stop advancing tanks with their bare hands.

I find consolation in Christ’s promise: the gates of hell shall not prevail against his Church

The facts are now there for all the world to see: this is what it looks like when an army of the deluded heirs of an evil empire attack a Christian, democratic nation.

It is impossible to put any other interpretation on the events of this past week without saying that black is white. Tolkien imagery is popular with Ukrainians and Russians alike when discussing this war; it is almost a truism to see it as an invasion by Mordor.

Not in my name

The obverse of this truth is that this is not an invasion by the whole of Russia. There has been another Christian and democratic nation which entered the world stage last week, side by side with Ukraine. We only hear of it in dim reports: a solitary Russian army unit refusing to obey orders. We only see the representatives of that nation for a few seconds, as they unravel their self-made “No to war” banners on the streets of Russian cities, before they are brutally arrested by Putin’s riot police. Yet those few seconds are enough to change history: Putin now has no credibility in speaking for ‘the Russian people’. Everybody can see that his greatest fear is that Russians may speak for themselves.

It no longer matters that Putin once indulged in some blasphemous political flirting with Christianity. His version of Christianity is too different from Christ’s. He is prepared to be a patron of the Church because having a ‘strong’ church is useful for an empire. But there are conditions attached to that: there may be only one church, subject to strict hierarchical discipline not dissimilar to Putin’s secular power structures. That church must obey and serve the secular government. Christ is permitted to be there, but only as a loyal helper to Caesar. For example, when 100 brave Russian Orthodox priests signed an open letter urging Christian charity towards imprisoned opposition protestors in 2019, the iron fist of the ‘loyal’ church hierarchy promptly came down upon many of the signatories.

What the invading Russian troops bring with them is not only political tyranny, but also religious persecution - of Soviet-style and proportions - for anyone who does not conform to Putin’s utilitarian view of religion. Russia’s laws against unlicensed “missionary activities”, as well as against “extremism” generally, are severe, and Putin’s regime does not hesitate to apply them. Parts of Ukraine occupied by Russia since 2014, such as Crimea and Donetsk, have seen serious persecution of the Orthodox Church of Ukraine, which worships in Ukrainian language and claims independence from the Patriarch of Moscow. Putin’s position is that the Ukrainian church has no right to exist, except as a loyal part of his imperial church - just like an independent Ukrainian state has no right to exist.

It is in this context that Patriarch Kirill of Moscow spoke this week of cursing the “evil forces” which resist the Russian offensive in Ukraine. His sermon was deeply reminiscent of the worst examples of the subjugation of the Church to Stalin and other secular tyrants. And after a whole week of Putin’s imperial and revanchist rants, it is a bit too late to try and present this invasion as also being a Christian crusade. All Christian churches in Ukraine have been clear in their condemnation of the aggression and in praying for the Ukrainian army. Even the head of Russian church in Ukraine, loyal to Patriarch Kirill, condemned Putin’s invasion as “the sin of Cain”.

I was baptised in to the Russian Orthodox Church, and I owe it an infinite debt for all the awful sins it has forgiven me in God’s name, for the Holy Communion I have received from the hands of its priests and for joining me in holy matrimony to the woman I love. Like many others tied to the Russian Church by such sacred cords, I grieve to hear Patriarch Kirill saying such things, and not for the first time. But I find deep consolation in remembering Christ’s promise that the gates of hell shall not prevail against his Church. We should fervently pray for the Patriarch who has, unfortunately, done more to fulfil the prophesy of the danger than the prophesy of deliverance.

Pavel StroilovPavel Stroilov is a political exile of Russia, having fled to the UK after his research as a historian put his life and liberty at risk. He now works as a legal consultant for Christian Legal Centre.