Gwyn Williams has just returned from the Ukrainian-Romanian border. There, he saw the despair of people traumatised by loss, and experienced the joy of seeing the Church work together to show Christ’s love. But with the conflict showing no signs of abating, he says the need is greater than ever 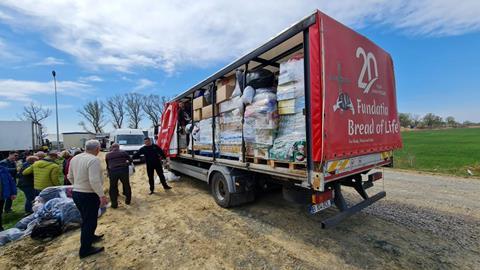 I have just returned home from a short trip to Eastern Europe. In my many years of aid work, it was an experience that was utterly unique. From feeling the pain of those suffering trauma and loss to seeing churches and communities working together across all sectors of life, denominations and cultural backgrounds, it was a full-on emotional rollercoaster.

Having boarded a plane at some ridiculous hour of the morning, my colleague Gavin and I landed in Suceava, Romania, near the Ukraine border, at 11:30am. We were driven to a sports hall where 250 mattresses were lined up in rows, many of them already occupied. A constant stream of refugees were arriving, picked up at the border by the local fire brigade and driven to the centre.

The tension is palpable; the people there have lost everything. We were told of a father and daughter who were shot and wounded while escaping Ukraine, and then drove for two days without stopping to reach the border. We heard of mothers and wives trying to communicate with their husbands; brothers and sons who had been left behind to fight. And all of this in the extreme cold of winter, where the air cuts through you like a knife.

I had been in Romania just a few months earlier, but the atmosphere had changed completely. The emotional turmoil was indescribable; it was nothing like I had ever experienced before.

After the shock of the first day, we began seeing the signs of hope around us: the deputy mayor volunteering at the refugee centre; church leaders folding sheets; teenagers handing out hot drinks and grandmothers making sandwiches. You see love poured out and the Church working as Christ intended it.

We helped deliver food to groups in the area. First, a prison ministry who had converted an old army barracks into a hostel from which lorries were being loaded to return to Ukraine. Next, a village hall where 300 people were being fed each day, and a Christian holiday centre housing unaccompanied young adults. Finally, a warehouse distributing food to Ukrainian families that had been rehomed. The coordination and cooperation was incredible.

People walk around dazed and confused, disinterested in the food and drinks being handed to them 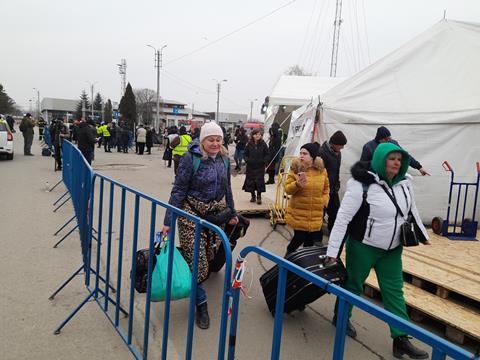 Source: Tents at the border providing clothing and food

The day was filled with stories of families sharing their food and their homes, running soup kitchens and getting ready for worse to come. The volume of people arriving in Suceava had already led to local food shortages, but when food ran out at one centre, a man offered his pig. It fed 200 people for two days.

In the afternoon, we crossed the border into Ukraine. Hot drinks and food were being handed out to families waiting for loved ones. Volunteers on mobile phones were helping people connect with friends. I have only ever felt similar levels of the confusion and tension when helping in the aftermath of an earthquake in Nepal in 2015. People were walking around dazed and confused, disinterested in the food and drinks being handed to them.

The following morning, we met with Alex* and Krystine* from western Ukraine. Their church distributed Feed the Hungry’s first 30 tons of food into the country. At considerable personal risk, they had made the long journey to meet us and collect medical aid.

When food ran out at one centre, a man offered his pig. It fed 200 people for two days

They described the incredible hardships they are experiencing on a daily basis, living in a city where 400,000 refugees are hanging onto diminishing hope but are determined to stay. They spoke of families torn apart; wounded and newly orphaned children whose parents had been killed in the war. They told us about the aid being distributed by brave volunteers using country roads to get behind enemy lines and into besieged cities.

From Suceava, we journeyed southeast to Moldova to meet Sam and Leo. Thousands of Ukrainians are passing through their town every day by train, and they are providing them with food and water. Over dinner with the two refugee families staying with them, they told us of their plans to convert a disused hospital into a hostel for displaced Ukrainians. We began to make plans to send a shipping container to Moldova (which leaves Leamington Spa at the end of next week) to provide the basic food and bedding required to set this up.

Landing back in the UK felt surreal. Ukraine was still in the news, but life felt so normal. Reflecting on the experience, I am so encouraged by the response of Christians and the Church, but I suspect this is only the beginning of the story. We should expect that much more will be demanded of us in the coming months, and we must be prepared to respond.

*Names changed to protect their identities.

Gwyn WilliamsGwyn Williams has been UK Operations Director for Feed the Hungry for the last ten years. Gwyn's career as a designer was foundational in building his desire to work with community engagement projects. He has been involved in setting up a youth café, a tea bus street café, and an art gallery in his local town, Hinckley, as well as venturing as far as Romania and Mongolia in painting murals in orphanages, digging wells in Zambia and community kitchens in Uganda and Haiti.