I disrupted a church service. Here’s why Christians like me are taking radical action against climate change

Despite the Archbishop of Canterbury declaring that climate change is the greatest challenge we face, the Church of England still invests millions in fossil fuels. Valerie King from Christian Climate Action is calling on the CofE to divest by October 2022 – and she’s disrupting church services to make her point 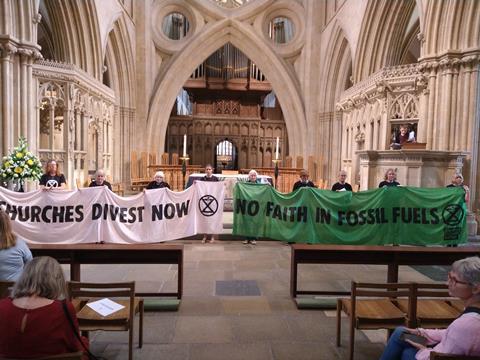 Why would ten Christians, including a retired Anglican priest, disrupt a Sunday Eucharist service in Wells Cathedral?

As members of Christian Climate Action, we thought carefully about how to carry out this action in a prayerful and respectful way. After receiving communion, we processed to the altar singing the final hymn and faced the congregation holding banners with the words: “No Faith in Fossil Fuels” and “Churches Divest Now”. One of our group then went to the pulpit to explain why we were there: to call on Church of England dioceses – including Bath and Wells – the Church Commissioners and Pensions Board to commit entirely to fossil fuel divestment.

We all had our personal reasons for taking part in the protest; Karen Grattage, mum of a toddler and churchwarden of Bath and Wells Diocese said: “I’m really worried about the future for my child and other people’s children. I think people don’t realise churches are still investing in companies that are destroying the planet and I want things to change before it’s too late.”

Retired teacher Liz Rosser gave her reasons: “Fossil fuels are killing us. We are facing the collapse of everything we know and love. People are dying and losing their homes now because of the greenhouse gases in the atmosphere, caused primarily by the burning of fossil fuels. It is abhorrent that the Church should continue to support and profit from investment in these killers. We have alternatives. Let’s invest in those.”

And Phil Manning, training for ordained ministry at Trinity College, who took part in the protest outside the cathedral, said: “I am joining this action because the Church of England seriously needs to put their money where their mouth is in terms of declaring that we are in a climate emergency. The Church claims that caring for creation is part of our mission to the world…and yet, despite the fact that it’s been long proven that fossil fuels are damaging our world, it continues to invest and therefore participate in this destructive practice.”

The greatest challenge we face 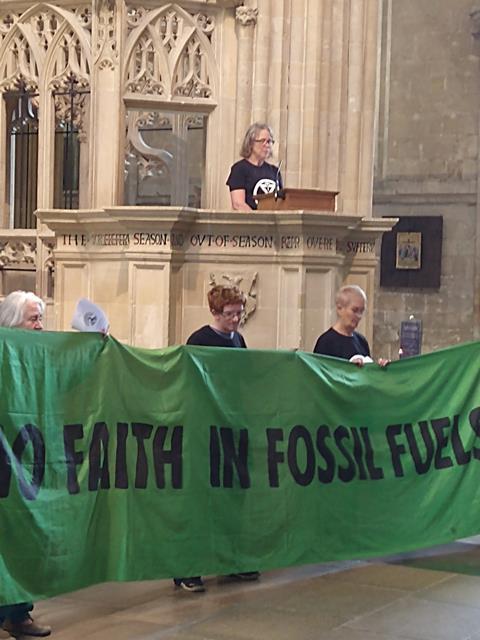 Archbishop Justin Welby puts it very plainly: “Climate change is the greatest challenge that we and future generations face.” And the inconvenient truth is that, while there is acceptance of the reality of the climate emergency by governments and major institutions, carbon emissions continue to rise – and 86 per cent come from the burning of fossil fuels. In May 2021 Fatih Birol, the International Energy Agency’s executive director told The Guardian: “If governments are serious about the climate crisis, there can be no new investments in oil, gas and coal, from now – from this year.”

The current fuel crisis, exacerbated by the Russian invasion of Ukraine, presents the Church of England with an opportunity – and a moral decision. To continue funding the fossil fuel industry, which is profiting from the crisis and is committed to increase oil and gas extraction; or to divest immediately, concentrating on the development of clean alternatives to fossil fuels.

While UK citizens suffer from fuel poverty, twelve CofE dioceses, the Church Commissioners and Pensions Board continue to invest roughly £55m in companies like Shell, who in March cynically purchased a cargo of Russian crude oil at a knock-down price, as other companies shunned Russian supplies.

An estimated 35 per cent of all the commitments to divest from fossil fuels around the world have been made by faith institutions, more than any other single sector. This is good news and something to be proud of. But we must go further. This week Synod is voting on a pathway to net zero by 2030. We urge the Church to also announce its intention to divest entirely from fossil fuel companies and complete divestment by the end of October 2022, ahead of the international climate change meeting in Egypt (COP27). Humanity is running out of time and the Church must be a prophetic voice!