Using graffiti to spread the gospel

Paul told the early Church he would use “all possible means” to reach people for Jesus. But would that include graffiti? Fiona Burt explores 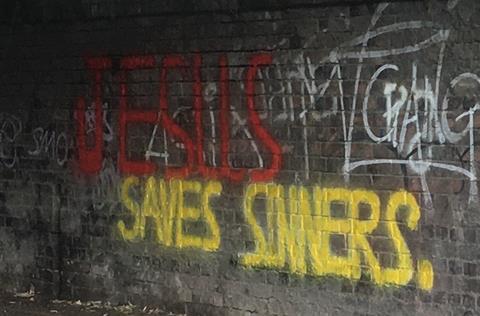 In the world of art, graffiti divides opinion. Some regard it as a modern urban art form which transforms dull and ugly surfaces into bright and sometimes beautiful images. Others see it as wanton vandalism of public property. But what if the ‘tag’ is the name of Jesus and the words, rather than obscenities, are bible verses?

Paul wrote in 1 Corinthians 9:22: “I have become all things to all people so that by all possible means I might save some.” For some, “all possible means” is a justification for illegal acts, which have included, over the years and across the nations, smuggling Bibles into countries where they are illegal, and meeting in underground churches not allowed by the state. In the context of the rest of this passage, however, Paul is clear that he is not addressing methods of evangelism, but his own personal rights as an apostle. He starts in chapter 8 by teaching the Corinthian church that, while they are free to eat meat which has been offered to idols, they should abstain if it might cause a weaker brother to stumble in their faith.

Graffiti, like street preaching, reaches people that would never normally cross the threshold of a church

Chapter 9 is a continuation of this theme, where Paul states that while it would be his right to be supported in his ministry, he and Barnabas choose to work so that the gospel is not hindered by suggestions that they are financially motivated. He then goes on to suggest that he is willing to limit his freedoms in many other ways too, such as participating in Jewish religious life to win Jews to faith, living as if he is not subject to religious laws to win Gentiles to faith or becoming weak to reach the weak. This passage is therefore more of a challenge to those who object to changes in their service format than an instruction to reach for the spray paint.

Having said that, graffiti, like street preaching, reaches people that would never normally cross the threshold of a church. And the verses and messages daubed on the lock gates and canal bridges around Wolverhampton and Birmingham recently stimulated much discussion with the locals who hang out there with their cans of beer. Should we despise any opportunity to turn people’s minds and hearts towards God?

I would love to hear testimonies of people who had come to Christ through a graffiti message, but I do wonder if there are many others for whom the ‘writing on the wall’ brings the Church into disrepute? Because graffiti is, without a doubt, a criminal offence. In England and Wales, it is punishable with an unlimited fine; in Scotland it can result in six months in prison - enough to make most adults think twice before embarking on a new artistic career.

The Gospel Graffiti Crew are a team of 15 artists from eight different countries who identify approved locations for legal graffiti art to communicate the gospel message. Led by Fasm, who has been spray painting since the early 1990s, they believe that graffiti art is a powerful medium which can be used to reach people for Christ. To do this, they have painted Jesus’ name, words such as ‘Truth’ or ‘Glorify’, representations of Jesus and other images they believe may resonate with the local community. If the aim of most graffiti artists is to achieve fame by proliferating their ‘tag’, these guys seek to make the name of Jesus visible across the globe.

We can all be provoked into examining our own witness

Strictly speaking, of course, this is not true graffiti, as it is not illicit. But if you feel called to join them in this ministry, the website legal-walls.net lists around 200 legal graffiti spots in the UK. Do, however, check for approval with the local authority before starting work! And perhaps our churches could also offer up some suitable surfaces for this artwork? 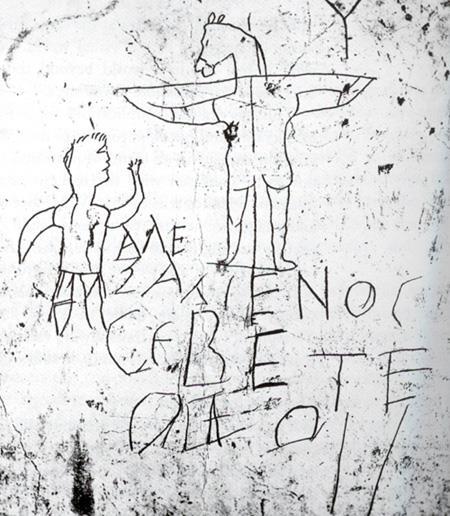 The Alexamenos graffito depicts a man worshipping a crucified, donkey-headed figure. The Greek inscription translates to “Alexamenos worships [his] god,” indicating it was meant to mock a Christian named Alexamenos

Most graffiti, however, is less than wholesome, and some is downright obscene, or blasphemous. This has been the case for millenia. The Alexamenos graffito is a piece of Roman graffiti which mocks a Christian called Alexamenos; it dates from around AD200. The nature of most graffiti should not, however, make it a no-go-area for Christians. Christ came to redeem that which had been spoilt by sin. There is a great story on the webpage for the album Biblical Graffiti by ApologetiX. Before their lead singer and lyricist, J Jackson, even became a committed Christian, he was bothered by the smutty graffiti in his school toilets. He began “sanctifying” the walls by writing scripture verses next to the offensive graffiti. By his own admission, he didn’t really know verse numbers, so he just made them up!

So, if graffiti divides the art world, gospel graffiti is almost certain to divide Christian opinion. And perhaps that’s a good thing. We may not agree with them, but we can all be provoked into examining our own witness. As God’s people, we have been entrusted with taking his message of hope and salvation into a needy world. We may not be scrawling it on walls, but are there creative ways in which we can play our part in making the name of Jesus known?

Fiona BurtFiona Burt is a kitchen table theologian and freelance writer who is not artistic, but has taken to leaving twig crosses on gateposts and placing scripture postcards into books donated to the charity shops.