Colston Four: Why Christians should celebrate the 'not guilty' verdict

The statue topplers were right – and now they are free, says Jonty Langley 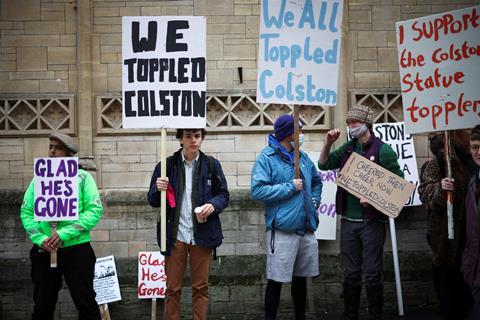 Where will it all end? That’s what I want to know. If we let people get away with tearing down statues of slave traders who profited from the kidnap, misery and death in captivity of 84,000 people, what next? Are any monuments celebrating the dubious heroism of terrible people safe? Will we ever be able to celebrate psychopaths, racists and mass murderers again? Where, I ask again with tears in my very Caucasian eyes, will it all end?

In the unlikely event I’ve been too subtle, let me be clear: I like the Colston Four (so named because they toppled a statue of slave trader Edward Colston during Black Lives Matter protests in Bristol). I am very pleased they have been cleared of criminal damage. I think all Christians should be.

The statue of Edward Colston is not a complicated case. Colston was deputy governor of the company in charge of trading kidnapped human beings – men, women and children made in the image of God – which sold them like bags of manure. Their suffering is, I think, unimaginable to most of us. But if you’re struggling to empathise, perhaps imagine the people trafficked into the sex trade who you no doubt care about. Then remember that those people were subject to all that exploitation and abuse, while also being worked to death, along with their children. Colston was a very senior and very successful people trafficker.

He was also, we are told, a philanthropist. He helped the poor, schools and churches. Cool. Bashar al-Assad created a liberal environment for churches in Syria and many argue that Christians enjoyed more protection under Saddam Hussein than after he fell. Shall we put up statues of them? Or, if you prefer a British example to keep things simple: Jimmy Saville did a fair amount of charity work. Shall we put him on a postage stamp this year, or celebrate him in bronze?

The inscription on Colston’s statue called him "virtuous and wise”. That aggressively selective tribute is not history, it is deceitful hagiography.

“Ah, but it’s history,” some will cry. ”You can’t edit history!” And yet you can. In fact, that is exactly what the Colston Four were trying to redress. When we erect statues of people in public spaces we are generally honouring them. While no person is perfectly worthy, honouring those guilty of significant wrongdoing is editing history. Erasing it, even. The inscription on Colston’s statue called him "virtuous and wise”. That aggressively selective tribute is not history, it is deceitful hagiography. If future generations were to learn any history from that, the history would be a lie.

Unless, of course, one believes that the good he did outweighed the bad. After all, this is what we always have to do with heroes. No human is perfect, all have sinned. The contemporary trend that seeks to define people by often isolated sins is itself problematic. But in order to think of Colston as on balance worthy of honour, you have to be a racist or to think slavery and human trafficking aren’t a big deal.

History is not written in statues. It is written in books, where we can weigh up the facts for ourselves. That’s why protestors wanted to pull down the statue. As an illustration, have you heard of a chap called Adolf Hitler? Of course you haven’t, because you’ve never seen a statue of him.

The Bristol protestors were charged with damaging a statue without lawful excuse. I believe their excuse was lawful. If I were to stand on Bristol docks with a megaphone and tell passers by every day that it is acceptable (or even virtuous and wise) to kidnap people and traffic them into violent misery – as long as they are black – I would be committing a hate crime and effectively inciting criminal behaviour. So was Colston’s statue.

Why Bristol authorities did not take it down is as much a mystery as why any Christian who believes God made all races in his image would mourn the statue’s toppling. But this week’s verdict does raise more complicated questions for the future.

Who gets to decide, and on what basis, great memorials can safely be vandalised in the name of justice and free speech? The simple legal answer is the courts.

For Christians the more complicated question is how to see ‘heroic’ but truly complex figures. A leader who helped to save the world from the Nazis may also have knowingly allowed a famine to kill huge numbers. Whether you identify that leader as Churchill or Stalin will come down to your politics. And that will certainly colour your attitude to his statue.

In wrestling with these questions, Christians must champion forgiveness and grace, but we must never glorify evil.

For an alternative opinion on why Christians should not celebrate the acquittal of the Colston Four read Calvin Robinson's piece.