No matter what Colston has done, Christians must not support criminal damage

The case of the Colston Four was a political victory that undermines democracy, says Calvin Robinson. Rather than stoke divisive racial politics, the Church should be opposing violent behaviour and praying for a society united in Christ 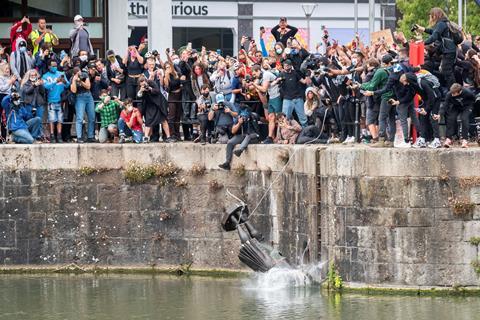 Racial politics should have no place in our faith, which says that “there is neither Jew nor Greek, there is neither bond nor free, there is neither male nor female: for ye are all one in Christ Jesus.” (Galatians 3:28, KJV). And nor should it feature in our legal justice system, as every man is equal in the eyes of the law. Equality under law is a fundamental British value; to argue otherwise is discriminatory and prejudiced. Why, then, are we seeing so many harmful sentiments being presented at the forefront of the conversation around the Colston Four and their actions? It seems the narrative of the liberal-progressives – and indeed, the jury – is that the Colston Four were justified in tearing down a statue and damaging public property because of racial politics.

Criminal damage is criminal damage, or at least it should be. We all saw what they did. Their actions were well documented. They tore down, defaced and damaged a piece of public property. However, the Colston Four were let off due to a technicality - a loophole in the law, if you will. They claimed they had a ‘lawful excuse’ for their actions. This may be within the letter of the law, but it certainly doesn’t feel in the spirit of it. One’s conscience, in line with natural law, would surely dictate that thuggish, criminal behaviour is wrong. They may not have been found guilty of criminal damage, but they won’t escape the guilt of their consciences.

Without losers’ consent, democracy fails. If you don’t achieve your goals, you do not get to take the law into your own hands

Instead of trying the Colston Four for their direct actions, it seems the trial, and the resulting public discourse, has been around the subject of the statue itself. After all, the ‘lawful excuse’ put forward was that they were preventing a ‘hate crime’ by not allowing such a statue - of a former slave trader - to remain standing. Edward Colston may well have been a detestable figure but the argument is flawed on many levels. As an ethnic minority, I can’t say I’ve ever felt ‘hated’ by a statue; nor do I believe Colston’s statue was somehow inciting others to hate. The only place I see any hatred in this scenario is in that of the four people who tore the statue down undemocratically.

They’re also missing the point - we do not venerate public statues. Statues in a public space do not signify a perfect person; one doesn’t have to be a saint to receive a statue, and even the saints were flawed individuals. We all are, we’re fallen. No, statues signify a person who has made a significant contribution in some way. And while no one would excuse the evil way in which Colston made his money, the statue was not there to highlight that, it was there to highlight the hospitals, churches and other charities he established in Bristol. The Bible is full of figures who made their reputation and/or money through illicit means and then went on to do good. I’m not saying that is the case with Colston – I’m not here to defend him – I am merely pointing out the fact that good versus evil is not always as black and white as protesters would like us to believe.

The crux of the matter is it should not matter who the figure on the statue was. The Colston Four were on trial for their actions, not their supposed virtue. The subject of the statue should be under review entirely separately from the violent behaviour of the Colston Four. We live in a democracy, there are plenty of legal methods of appealing to remove a statue. Vote on it!

We must never glorify evil. We must never champion damage to public property, vandalism or thuggish behaviour. If the people of Bristol deemed Colston’s statue too unsightly for the public space they could have requested a local referendum on the matter; they could have spoken to their local representatives; better yet, they could have stood for public office themselves. In a democracy, the minority do not get to impose their will on the majority.

The Colston Four were on trial for their actions, not their supposed virtue

Naysayers may argue that the Colston protestors did make their case known through protests and petitions. This may well be the case, but they did not win the argument. Part of democracy is losing with grace. Without losers’ consent, democracy fails to function. If you don’t achieve your goals, you do not get to take the law into your own hands. If you’ve exhausted every democratic means available to you – which they hadn’t – and still don’t succeed, it’s time to call it a day. By tearing down the statue, the Colston Four were, in effect, throwing a very public tantrum for not getting their own way. It’s a sorry shame to see so many in the mainstream media agreeing with their destructive methods, just because they apparently did so to fight a racial injustice. But perhaps that’s only because they see the world through a racial lens, wrapped up in divisive ideologies that are causing far more harm than good.

White guilt is not a Christian virtue. Seeing the world through a racial lens, in line with critical race theory, is inherently divisive. Splitting people into white versus non-white is counter-scriptural. Surely, we’d do better to move toward a colour-blind society, like the one suggested in Galatians 3:28; a society united in Christ rather than by our political tribes.

For an alternative opinion on why Christians should celebrate the acquittal of the Colston Four read Jonty Langley’s piece.