As a Christian pacifist I can’t encourage Ukrainians to take up arms. But neither will I condemn them 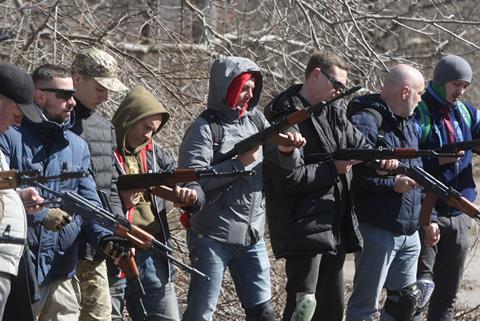 For some people, the question, 'Can there be a pacifist response to the Ukraine crisis?’ is actually a prelude to insisting that there cannot be.

I find it frustrating that many of those who hold this view never seem to speak with any Ukrainian pacifists.

Ukrainian Pacifists have been challenging war and militarism since long before Putin’s invasion. Yurii Sheliazhenko is secretary of the Ukrainian Pacifist Movement. He lives in Kyiv and every so often his home shakes due to “explosions nearby, because of Russian missile attacks”. Yurii’s friend Ruslan Kotsaba spent a year and a half in prison without trial after being accused of “treason”. His crime was to encourage people not to co-operate with military mobilisation against separatists in eastern Ukraine.

In both Ukraine and Russia, you can find peace activists of several faiths and none. For some, it is their faith that motivates them. “We, Christians, cannot stand idly by when a brother kills brother, a Christian kills a Christian,” declares a petition signed by Russian Orthodox priests.

As Christians, our starting-point is the life, death, resurrection and teachings of Jesus Christ. However, we are all influenced by our context and culture and Christians are not immune to the temptation to accept dominant assumptions without question. We can easily slide into assuming that violence is the solution to conflict and that the armed forces of the country we live in are the good guys.

Jesus’ life exemplified active nonviolence. As a resident of the Roman Empire, he lived under a particularly vicious and oppressive regime. He did not engage in violent resistance to it. This does not mean he did not challenge it. His teaching to “turn the other cheek” is an encouragement of nonviolent defiance. If he had meant it as a call to passivity, he would hardly have followed it with his action in the Jerusalem Temple, when he challenged the religious establishment who were puppets of the Roman rulers. Jesus’ forceful protest involved attacks on property rather than violence against people.

Social media is full of similar examples. Unarmed Ukrainian civilians are sitting in front of tanks. They are challenging Russian soldiers to their faces. They are marching daily in anti-occupation protests in cities controlled by invading troops.

Meanwhile in Russia, over 15,000 people have been arrested for peacefully protesting against war. Ioann Burdin, an Orthodox priest in the village of Karabanovo, was arrested after an anti-war sermon. He became the first person to be charged under a new law that allows up to three years in prison for “discrediting the use of the armed forces”. In Belarus, opponents of war have slowed down railway lines transporting Russian troops and equipment.

Mars, the god of war, is still being worshipped

As I sit in relative comfort in Britain, it is not for me to judge people in desperate situations. I will not judge someone in Ukraine who feels that they have no choice but to use a weapon. While I cannot encourage such choices, it would be outrageously arrogant of me to condemn them.

Picking up a weapon in desperation is very different to planning a war. Several British commentators are recklessly calling for a “no-fly zone”. This would mean the RAF and US Air Force shooting down Russian planes and killing Russian troops (including teenage conscripts). It would mean a war between nuclear-armed states. Such calls are possible because we live in a militaristic society in which it is hard to reject the absurd assumption that the only effective response to violence is more violence. This is like trying to put out a fire with petrol.

As Brian Zahnd, an evangelical pastor in the US, puts it, we need to recognise that Mars, the god of war, is still being worshipped “under an assumed name”. As we criticise Russian Orthodox leaders for supporting Putin’s war, we must also notice the plank in our own eye. How many British church leaders are speaking out against Boris Johnson’s supply of weapons and military training to Saudi Arabia? Saudi forces are bombing civilians in Yemen just as Russian forces kill civilians in Ukraine.

The Ukrainian Pacifist Movement suggests that peace protests in Russia and the West could push world leaders to the point at which they feel that they have no choice but to engage in meaningful peace negotiations. Militaristic attitudes include the assumption that it is politicians and generals who solve problems. But the hope I feel is strengthened when I see footage of Ukrainians standing in front of tanks and of Russians writing anti-war slogans in the snow. Christ stands with the victims, the marginalised and those who hunger for righteousness.

“Put not your trust in the powerful,” warns the psalmist (Psalm 146:3). It is advice that is never more relevant than when we are faced with war.

Read an alternative perspective, which advocates a 'Just War' approach to the conflict

Symon HillSymon Hill is a Christian author and activist. He is Campaigns Manager of the Peace Pledge Union and a history tutor for the Workers’ Educational Association. He is a deacon at New Road Baptist Church in Oxford and his latest book is The Upside-Down Bible: What Jesus really said about money, sex and violence (Darton, Longman and Todd).