Putin and the plank in our eye: repenting of our selective compassion for Ukraine

It’s easy to paint Putin as the epitome of all evil and pray to God for victory, says Jonty Langley, but in doing so, are we forgetting our own nation’s past indiscretions and indulging in the sin of hypocrisy? 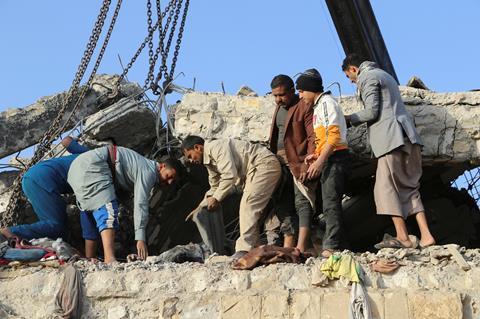 Rescuers recover a body of a man from under the collapsed roof of a detention centre hit by air strikes in Saada, Yemen earlier this year. Over 80 people were reported to have died in the bombing, which was condemned by the UN. Amnesty International said US-made weapons were used in the attack

Sorry for the shorthand, I’m just trying to get the messaging straight. These are, after all, the narratives that have pervaded every media channel - and seemingly every part of the political spectrum - over the past few weeks. It’s a pity that they’re questionable at best. And it’s a pity that Christians have been among those believing them, ignoring one key biblical command.

Even as I write, I hear the tapping of letters to the editor, so here’s a quick shibboleth: I’m not a Putin fan. He has allowed grimly oppressive laws internally and leads nationalistic and aggressive foreign policy.

I just think we do that, too.

So when I hear and see the narratives above being repeated among a sea of well-intentioned blue and yellow, I get a little bit uncomfortable. It’s not that invading another country is OK. It isn’t. What is frankly bizarre is the collective amnesia that seems to have taken hold, causing everyone to forget our (and by ‘us’ and ‘our’ I mean the UK-USA plus allies) invasions of Afghanistan and Iraq a few years ago. Our arms sales and air strikes in Yemen even this week. In these situations, we invaded sovereign countries on false pretexts (and/or supposedly to track down evil militants with odious ideologies). In doing so, we secured our national interests beyond our borders, sacrificing children and countless foreign lives, triggering huge refugee crises. All of which, Putin has also done.

So, when we ask why he thought he could get away with it, let’s ask if his memory is as short as ours.

That’s not what we are supposed to think, obviously. We’re supposed to think that Putin is mad. Or evil. Or both. And again: I don’t think we should admire the man. But if we interpret his actions as mad or evil and interpret our own leaders as being guilty of nothing more than cynicism or incompetence, we may have fallen into the sin of prejudice. And that’s easy to do when your nation’s propaganda machine is running hot. But smart people should always be wary of narratives that paint our national competitors for resources or markets as also, coincidentally, wicked and depraved.

Christians should be particularly aware because of Jesus’ command to remove the plank from our own eye before attempting to remedy someone else’s splinter problem.

I hear the mob bay: How can you call this a splinter? Haven’t you seen the footage of the suffering in Ukraine?

And to this I say: Repent.

That may seem a bit harsh, but I think it is justified. Repent. Repent of the racism that makes a white, developed world suffering feel more appalling than brown people suffering. Repent of callous disregard for the literally hundreds of thousands of deaths in Iraq and Afghanistan caused by our countries, and minimised every time we treat Ukraine’s suffering as more (or even equally) terrible. Repent of using God’s platforms and God’s language to pray against a nation (any nation), repent of asking God to side against a foreign government when we would be (and have been) completely unwilling to pray the same when our ‘side’ does it. Repent of wilful blindness and assuming our own goodness. Repent of that pride and the hate it so easily engenders. Repent of xenophobic hatred of Russian people, businesses and art. Repent of these things because they are both immoral and stupid.

And while we’re repenting, we can repent, too, of our apathy. Of the fact that most of us did not care about refugees until we were told that these were important. Of the rights of countries other than Ukraine to live without fear of imperial powers attacking them.

Do not grow weary

And hey, people like me can repent, too. When I see homogenous, ubiquitous expressions of support for a cause, my natural inclination is to distrust it. To worry that the blue and yellow flags I’m seeing everywhere are subtle signs of jingoism, militarism, a conformity to the thinking of this world. They aren’t. They’re small symbols of solidarity with the suffering and the oppressed that I should welcome rather than suspect.

But I hope this solidarity isn’t fleeting. I hope my flag-daubing sisters and brothers demand our Government accept far more refugees than before, and that we accept them from all over the world, not just prospective NATO allies with Caucasian populations. I hope our judgement on Russia for invading will extend to unequivocal opposition to US and UK aggression in future (and right now).

I hope that our collective conscience, pricked now by Ukraine, will not grow weary of doing good, but will continue to speak out against evil, whatever flag it flies.