Why I think Christians should support the strikes

As the gap between wages and the cost of living grows, the summer of 2022 has seen unprecedented levels of industrial action. Despite the disruption, Christians are called to take a kingdom view of strike action says Jonty Langley 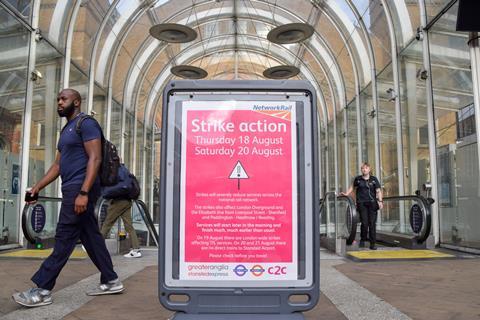 Greedy, selfish and dangerous – that’s how most media outlets seem to want to paint striking workers lately. And, since newspaper editorials and TV pundits seem to shape the British public’s political opinions like so much wet clay, that opinion is very popular in the secular world. Sadly, it even seems to have gained traction within the Church.

As the cost of living crisis deepens, and wages fall in real terms for many, bus drivers, barristers and bin workers have joined postal and rail staff, those working at exam boards, the UK’s busiest port and even council cleaning staff in taking industrial action. As the National Union of Rail, Maritime and Transport Workers (RMT) strike has rumbled on, many of us have been inconvenienced – some of us in serious and awful ways. Journalists have trawled the streets to find people angry at having missed essential appointments. News anchors have berated union bosses, acting, quite often, as mouthpieces for management. Very few have sought to lay the blame at the feet of the government, the senior management of rail companies or those who are making millions from these essential services.

But, as Christians, should we be conformed to this sort of thinking? Or do we have a different and renewed lens through which to see events like these? Personally, I think we do. I think there is a ‘kingdom view’ we can take of strike action, even as it inconveniences us personally.

Strikes may not be a spiritual coming together but they are a human one, seeking to provide a balance by weight of numbers to the power of the privileged few

In the Bible, Jesus almost always sides with the weak, the poor and the marginalised. The prophets of the Old Testament raged against the selfish, the rich and the powerful at least as much as they denounced idolaters and evildoers. Christian heroes, from Wilberforce to Martin Luther King Jr, have time and again stood against the vested interests of elites, and most of us applaud them for their struggles. We can’t imagine how any child of God could have opposed them and yet, often, we fail to see the struggles of our own time.

A time such as this

In a world where money is power, and most workers have precious little of both, the ‘natural’ way of things is for people at the bottom of worldly hierarchies to be taken advantage of. When economic times are hard, those at the top tend to try and shift the burden onto those at the bottom even more. This is not an ideological analysis but a biblical one. Humanity is sinful. Powerful people, fallen as they are, tend to build pyramids, and often on the backs of the poor and weak majority. The prophets knew this. And we Christians know there is a better way, an upside-down kingdom where the last will be first and the least of these become the yardstick by which our morality is measured.

But we cannot make people righteous. We cannot force conversions or expect the justified to become fully sanctified in everything they do. We would be foolish to rely on human righteousness to prevent injustice – and we rarely do. We have police and a legal system because we know, instinctively, that sometimes we must constrain people’s actions; their hearts cannot be counted on. We also know that any one of us has little hope of successfully opposing a powerful person that seeks to profit unjustly from our work, or refuses to share when we are in need.

Powerful people tend to build pyramids, often on the backs of the poor and weak majority

This is why we stand together. We march. We pray. We take Jesus’ promise that when we forsake our individualism, he is with us; there is a broader lesson in addition to the spiritual. This is what unions do. This is all that strike action is.

Strikes may not be a spiritual coming together but they are a human one, seeking to provide a balance by weight of numbers to the power of the privileged few. Transport workers who held our country together during the pandemic are being offered a real-term cut in wages, dressed up as a generosity by those who are getting rich off their work. They are using the only tool at their disposal to get a better outcome. That tool is inconvenience. An alternative method of strike, which hits the pockets of shareholders rather than the commutes of ordinary people, is illegal in Britain. This is their only choice.

As Christians, we can choose to listen to the powerful and rich and blame the strikers rather than the bosses, or we can ask why the wealthy shouldn’t share. We can resent those who are working for a better deal for themselves, becoming envious of their good fortune like the labourers in Jesus’ parable (Matthew 20:1-16), or we can support them in their fight for justice. We can renew our minds from the automatic assumption that the powerful are naturally right, and either accept inconvenience as the necessary price for fair pay or at least blame the people with the real power for the current situation.