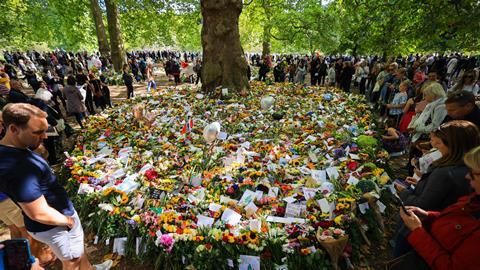 As a nation mourns, deeply Christian longings are coming to the surface. Perhaps our country isn’t as secular as we’ve assumed, wonders Bishop Graham Tomlin

The death of Queen Elizabeth II, like many a great public occasion, has made us do things we don’t usually do.

People who hardly ever darken the door of their local church have popped in to sit silently for a while and sign a book of condolence. Staunch republicans have found themselves shedding a tear for a queen. Strangers who have never met the sovereign feel as if they have lost a family member. People have been lighting candles and queueing for hours on end. We have bought flowers on an industrial scale and bowed and crossed ourselves in front of a coffin, perhaps without even really knowing why. There is something about a major event like this that suspends our normal behaviour and allows – or even compels – us to reveal hidden longings, and ask questions that we wouldn’t normally ask.

A period of mourning like this stirs something in us. It uncovers deeper layers of significance and questioning. When the prospect emerged of a very long queue snaking its way through the streets of London, the dioceses of London, Southwark and Lambeth Palace got together to hastily arrange Chaplaincy to the Queue; as one wit put it, perhaps the most British thing ever.

I work at Lambeth Palace, and so spent some time debriefing with clergy who had volunteered to spend several hours walking up and down The Embankment, talking to whoever wanted a chat while they waited to see the Queen’s coffin lying in state. What was a bit of a party atmosphere soon mellowed into something more sombre as the crowd began to inch forward, remembering they were here for a solemn task. Normally, if you approach people in the street to ask about their personal lives and emotions, you get short shrift but, this time, people were eager to talk. They wanted to tell the stories about their own experience of bereavement, the reasons that had compelled them to come to London; they talked about family, religion, faith, life, death – just about everything. It was as if the occasion had opened up avenues of conversation that usually lie hidden and made people realise that they were in the presence of a reality bigger than themselves; one that required a hushed reverence instead of the usual chatter.

Most of the time, of course, we don’t address those issues. Issues like death, politics and the mystery of life are not usually for conversations with strangers.

The Queen was always there on Christmas Day broadcasts, Trooping the Colour, FA Cup finals, Remembrance Day at the Royal Albert Hall, on all our coins and postage stamps – in fact, present almost wherever we turned. Such a death confronts us with our mortality, our own losses and the fact that we do not know and cannot control the future. It churns up the sediment that has settled deep in our souls, bringing uncomfortable and unfamiliar things to the surface.

But it’s not just that we don’t think about deeper things very often, it’s also that we don’t have the structures to help us manage life and death. Perhaps because we no longer have regular religious rituals in our lives, new rituals spring up at times like this – laying vast carpets of flowers or reverently placing marmalade sandwiches at sites related to the Queen’s life; the practice of paying our respects by queueing for hours for a brief glimpse of the coffin or flying flags outside our houses; even the almost ritualistic lifting of innumerable hands among a crowd, not in praise or in greeting but to take a photo of the funeral cortege as it goes past. 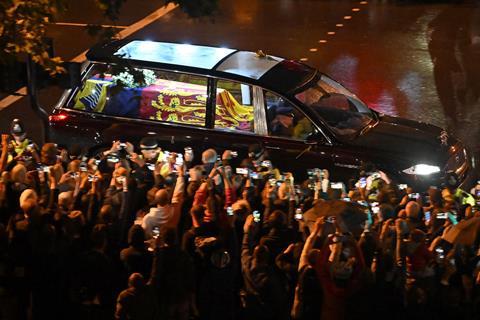 All of this reveals a latent spirituality underneath our apparently secular mindset; a deep longing that comes to the surface at times like this.

A symbol of permanence

One of the main themes that has repeatedly arisen from vox pops that have been all over the media is a nostalgia for permanence.

For most of us, the Queen is the only monarch we have ever known, so she represents for us a sense of permanence; something steady and fixed in a fast-changing world.

The pageantry of the last few weeks – the colours, horses, swords, lances, uniforms and marching – are a kind of link to the past. They root us back into rituals and practices we didn’t invent yesterday and which give us a sense of being rooted in history; in a sweep of time longer than the brief horizons of our own lives, let alone the fleeting lifespan of a tweet or Instagram post.

Yet the Queen was, of course, only a sign or symbol of permanence. She may have lived longer than any other British monarch, but she would have been the first to admit she was one of a very long line– part of an institution that speaks of a much longer permanence. The fact that at the very moment she died Charles became king tells of a seamless strand that outlasts any particular individual who occupies the throne.

Yet the monarchy itself has always only ever been a sign of an even greater permanence – the faithfulness of God. He is the one the psalmist described as: “our dwelling-place throughout all generations [who] brought forth the whole world [before the mountains were born]” – God ‘from everlasting to everlasting” (Psalm 90:1-2).

Perhaps underneath the latent spirituality of the past few weeks lies this longing for permanence. A very public death like this reveals our own frailty and mortality. It makes us face the shifting sands of time and long for stability. The fast-changing pace of our social and political life, the cultural shifts that make our world seem so different from that of the Queen’s generation have, perhaps, bred in us a deeply felt, often unspoken and unrecognised desire for something longer lasting; something that can be relied on.

Even the desire for a photo, demonstrated in the seas of mobile phones stretched out in yearning hands, is a desire for something permanent – a sure record to capture the experience forever, so much so that we can hardly experience the moment itself. And in all this, there is the haunted sense of what Wordsworth called: “a presence that disturbs me with the joy of elevated thoughts; a sense sublime of something far more deeply interfused”.

The prominent place of the Church in the public rituals of the last few weeks, flags at half-mast on steeples, archbishops conducting the important liturgical functions and acting as signatories to the warrant confirming the new king, has reminded us of how intricately woven Christian faith is into the fabric of our national life.

Despite our pretensions of being a ‘secular’ society, the roots of Christianity go deep into the soil of our national life. The singing of ancient psalms, the saying of Elizabethan-language prayers all offer that framework of permanence. Just contrast that to the rituals and ‘liturgies’ of the Jubilee celebrations – if it had been down to a government committee, rather than the Psalms accompanying the lying in state, we would have had songs on a loop by Elton John, and perhaps the coffin guarded by Harry Styles or David Attenborough rather than the Grenadier Guards!

Somehow, the solemnity of form, the tried and tested nature of the words and the dignity of long-considered Christian worship helps hold us in these moments of grief and change. And yet they remain unfamiliar to many who are steeped in more familiar, yet ephemeral forms of ritual – what James KA Smith calls the “secular liturgies” of the shopping centre, the school assembly or the sports stadium.

The task of the Church from here is to show how this ancient faith has the wisdom not just to provide consolation at times of grief but can also be a guide to ordinary life. It needs to have the confidence and wisdom to live and speak this as a spirituality for the everyday – one that that can permeate and renew politics, the arts, schools and offices, work and home.

This faith in the God of ages – the God who raises the dead – can give us the permanence and steadiness that we all crave, and fulfil the longings that our newly crafted spiritualities try to satisfy. It just needs a Church that really believes that.