9 lessons from the most watched sermon ever

It was billed by some as the biggest evangelistic opportunity of a generation and, if it isn’t already the most-viewed sermon of all time, it’s likely to become so. But what lessons can we learn from Justin Welby’s preach? 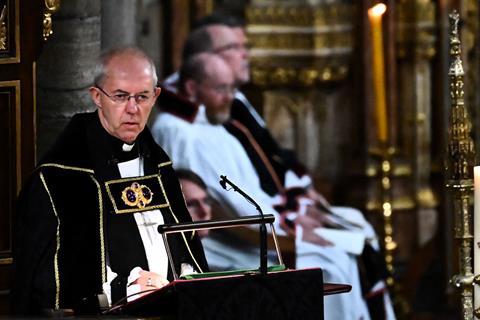 When Justin Welby became Archbishop of Canterbury, I wonder whether the thought ran through his mind that he may, one day, preach at the funeral of the UK’s longest reigning monarch? Enough to make the surest evangelist tremble.

It’s been wryly said that a traditional Church of England sermon should be “delivered in the tone of a very shy person asking the way to the train station.” I’m thankful that Welby was far from that. Measured, warm, and direct, from this preacher there was much to learn.

1) It was unashamedly about Jesus

Watching the TV footage as people arrived for the funeral, I heard one TV commentator remark: “Today is all about Her Majesty, nothing else matters…”

I nearly choked on my toast! If the correspondents had taken the time to look at the order of service, carefully crafted by Her Majesty, it should have been clear how much the Queen would have disagreed! Both the funeral and the committal were soaked in scripture, with rich Christian hymns and readings that again and again heralded the good news of Jesus Christ.

And Welby followed suit - not that he’d have needed much persuading. I’m so thankful that he didn’t shy away from keeping the spotlight of this Christian funeral on the uniqueness of Jesus Christ, with six powerful references to Jesus giving the sermon an unavoidable focus.

He quoted the passage from John’s Gospel that new Prime Minister Liz Truss had just read, gently explaining that Christianity was not about religious moralism but instead a response to a person: “Jesus, who does not tell his disciples how to follow, but who to follow – said: “I am the way, the truth and the life”.

It would have been easier to speak of a vague sense of life after death, yet with compassion and courage, Welby went for it

A few moments later he set Christianity apart from all other religions by describing Christ’s divinity and explicitly referencing his saving death: “Christ - God himself - said that he ‘came not to be served but to serve and to give his life as a ransom for many’.” Notably, this verse hadn’t featured in the service readings, and Welby went beyond, stating that Jesus came to serve by dying in our place.

2) He began in prayer and dependence

It would have been easy to rush straight to the Queen, but did you notice how the Archbishop began with a word of prayer? Earlier in the week, Welby had been asked by a reporter how he was feeling. Nervous to have the world’s media analysing his every word perhaps? He gently explained that God works through our weakness and, here, it was embodied - along with a recognition that the preached word is a ministry of the Holy Spirit. A simple: “Come Holy Spirit, fill us with the balm of your healing love. Amen.”

We were not here for mere tribute. God was at work - and I don’t doubt that, across the globe and throughout the day, God has been answering that prayer - and will continue to do so over the days and weeks to come.

3) He beautifully captured the Queen’s personality

On such royal occasions it is traditional not to have a separate eulogy, but there is an expectation that the preacher will give some time to describing the person. But what could be said that hasn’t already been said in the previous ten days of 24-7 media coverage?

With some choice words, Welby captured a sense of the Queen that extended beyond the formality and regality of the occasion: “She was joyful, present to so many, touching a multitude of lives.” In doing so, he spoke for many and, I believe, won their hearing.

There was a lot of expectation riding on this sermon, billed as the evangelistic opportunity of a lifetime. But in our desire to hear the gospel communicated to billions, there was a danger those grieving ‘in the room’ were forgotten.

Showing his pastor’s heart, Welby acknowledged that, despite the Queen’s public role, there was also a family, grieving in unique and challenging circumstances: “We pray especially for all her family, grieving as every family at a funeral…[yet] in the the brightest spotlight…. may God heal their sorrow, may the gap left in their lives be marked with memories of joy and life.”

5) He identified with millions in grief and fragility

Covid-19 has undoubtedly left its indelible mark on our lives - not least through those whose lives were taken in this pandemic. Welby acknowledged that, in this way, the Royal Family were just like “so many families round the world who have themselves lost someone recently”.

In our grief for the Queen, many of us will have reawakened emotions from other losses, recent or not. Welby gave us all permission to recognise that.

6) He connected with cultural sentiment to illustrate the gospel

In April 2020, at start of the first UK lockdown, the Queen gave an extraordinary national broadcast, finishing with a quote from Dame Vera Lynn’s ‘We’ll meet again’. Recognising a preacher’s gift when he saw one, Welby referenced the song’s hopefulness, tenderly using it to unpack the gospel: “Christian hope means certain expectation of something not yet seen. Christ rose from the dead and offers life to all - abundant life now and life with God in eternity.”

As Welby closed, there was no fuzzy tailing off. In preaching speak, he expertly ‘landed the plane’, courageously lifting our eyes to another throne: “We will all face the merciful judgement of God,” he said. “We can all share the Queen’s hope which in life and death inspired her servant leadership.”

These were carefully chosen words, that Christians will be praying may give many of those watching a wake-up call to the reality that, one day, we will each face God. Some may have shied away from confronting us with that reality. Certainly, it would have been easier to simply speak of a vague sense of life after death. Yet with compassion and courage, Welby went for it.

Her Majesty’s friendship with the famous American evangelist, Billy Graham, was well known. I think Graham would have been heartened by Welby’s bold proclamation, as well as his delightfully phrased invitation: “As the Christmas carol says ‘Where meek souls will receive him still / The dear Christ enters in’.”

8) He spoke God’s truth to power

Many contrasts have already been made between the Queen’s faithful service and the posturing and egotism that often passes for leadership. From the start, Welby highlighted the Queen’s faith in Christ as the driving force behind her humble service: “The pattern for many leaders is to be exalted in life and forgotten after death. The pattern for all who serve God – famous or obscure, respected or ignored – is that death is the door to glory.”

Perhaps that opening sentence is the one our media will latch onto most. And yes, it certainly would have been fascinating to see the camera pan across Westminster Abbey at that moment and reveal the faces of watching world leaders. Who looked at their shoes? Who squirmed? Who smiled?

But this wasn’t Welby playing at politics. This was him prophetically showcasing the beauty and goodness of Christ’s way at a time when we hunger for leaders more like our Queen.

Watching the sermon again afterwards, I was stunned to realise it was only five and a half minutes long. That’s less time than I spend scrolling on my phone in the loo on an average day! Welby spoke just 502 words, and did not waste a single one.

There is always more you can say. But part of the ‘magic’ is knowing when less is more. Everyone remembers when a preacher goes on too long - and that means they aren’t remembering what they actually said. In a funeral service that was intentionally designed by the Queen to “not be too long”, Welby got it just about right.

I’m praying that, one day in eternity, there might be a conversation between the Archbishop, the Queen, and those who came to faith through hearing ‘that sermon’ at ‘that funeral’. Perhaps it might go something like this:

“Thank you Ma’am for choosing Justin Welby. I might not be here without him. He showed me Jesus.”

Robin HamRev Robin Ham is the minister at St Paul's Barrow and joint leader of Barrow Mission Community in Cumbria. He blogs at That Happy Certainty, where he writes and collates on Christianity, culture, and ministry.