What does it mean to ‘walk the way of the cross’?

In this Holy Week, Christians are invited to walk the way of the cross. But what does that actually mean? 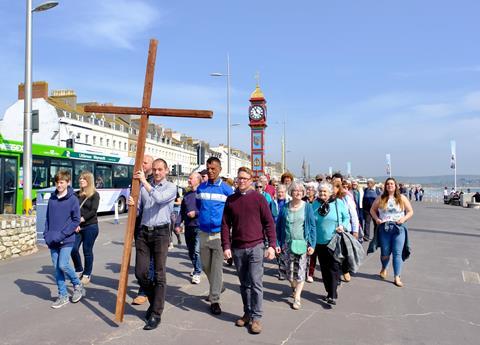 Christians carry a cross along Weymouth seafront on Good Friday

It has the ring of one of those Christian catchphrases, doesn’t it? Being told to “walk the way of the cross” is almost a cliché, like “forgiveness is a gift of grace”. Comforting words perhaps for the churched disciple but a mystery – literally – to anyone on the outside.

How is it possible to walk the way of the cross, some two millennia after the event?

No one in their right mind can be suggesting that we follow someone who has been whipped and beaten and forced to carry a wooden cross up a hill, to be nailed to it to die over several hours.

The original disciples didn’t. The men have betrayed and abandoned Jesus of Nazareth, who has apparently failed to fulfil the prophecy of the Messiah. Only some women stand “a little way off” as witnesses to the horror.

In the face of such barbaric cruelty, how is it possible to follow, to walk that way, without averting our gaze and running for our lives? Put another way: How is it possible not to be in a state of denial, not unlike Peter’s, pushing the horror of what is happening around us out of mind?

In an attempt to answer those questions, I’ve read two books during Lent. Neither of them is ostensibly about the way of the cross, but I’ve read them in a bid to understand the nature of human hatred; the kind of hatred that gave us the cross in the first place.

The first book is Sven Lindqvist’s Exterminate All the Brutes, which takes its title from words spoken by Kurtz, the central character of Joseph Conrad’s novel Heart of Darkness, and based on real events in 19th Century colonial Africa. Part travelogue and part historical revelation, Lindqvist traces the roots of 20th Century genocides to a colonial mindset that held that “lower races” would simply be extinguished by the irresistible march of advanced white peoples.

It makes for tough reading. For instance, Sir Henry Morton Stanley (he of “Dr Livingstone, I presume”) has a young boy bearer hanged in the Congo for “desertion”: “Stanley has no time for anything else but violence. To acquire food for his expedition he murders defenceless people on their way to market and shoots unarmed men in order to get their canoes.”

Lindqvist records how British Victorian scientists were complicit in these genocides. Charles Darwin and his colleagues were essentially fascist in their interpretation of evolutionary natural selection – it was nature’s way of disposing of the lower races. Consequently, the rampant murder in Africa and the slave trade were conducted out of sight of “civilised” Europe. But it was the bedrock on which European genocide would build a century later.

The second book is David Baddiel’s Jews Don’t Count, an extended essay about the lived experience of contemporary Jews, for whom antisemitism is an invisible racism for non-Jews, lower in the hierarchy of racisms than those directed at people of colour.

Baddiel’s great achievement is to make those who claim (like me) not to have an antisemitic fibre in their bodies feel very uneasy. That’s because unconscious bias is by its nature, er, unconscious. One small example that’s very much to the ultimate point of this column: At a Free Palestine demonstration in London, held after violence broke out in Gaza in May 2021, Baddiel spies a placard with a picture of Jesus of Nazareth with the words: “Do not let them do the same thing today again”.

I’m afraid (to my shame) that I took that to mean that we shouldn’t let the innocent suffer and die like lambs to the slaughter. But of course Baddiel’s point is different: “It’s the oldest negative myth about the Jews, older even than the blood libel or Jews secretly controlling the world: Jews are Christ-killers.”

So instead of pointing towards the Christ as a victim of oppression, it points towards his oppressors – and, guess what, they’re Jews, not Romans or any of the other great oppressors of the world, who have spilled so much blood in Africa and elsewhere.

The lesson I take from all this is that it isn’t (necessarily) Christian disciples that are asked to walk the way of the cross. It’s our responsibility to recognise those who already walk that way and who have no choice but to do so – the marginalised and oppressed, the brutalised and slave-traded, those whose spirit is crushed under the boot of prejudice and exploitation. These aren’t messiahs, to be sure – but hey, they know more about the way to Golgotha than we do.

We stand a little way off, like those women at the cross, to witness the brutalisation of the innocent, no more apparent than that directed at the people of Ukraine. Not because they are Christians, not because we wring our hands at their plight and not even because we might find ways to help them. But because in them, this Good Friday, we see the Passion of Christ.