Steve Stockman, who himself authored a book on the faith of U2, says Surrender: 40 Songs, One Story provides further evidence of the depth and devotion of Bono’s Christian faith 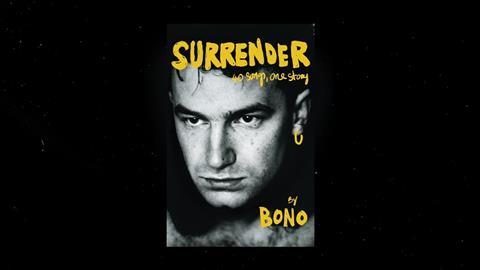 Bono’s memoir came up in Church.

“The problem with Bono,” I suggested, “is that having written a book about him I know more about him than he knows. When I met him I kind of finished his sentences”.

I laughed and the next day opened Surrender; 40 Songs.

The book sees Bono take us through his entire life, in beautifully poetic prose. Each of the chapters is named after a U2 song.

Paul Hewson, as Bono was born, has lived quite the life. He was born into an ordinary family in a very ordinary street in Dublin. He lost his mother, Iris, as a teenager. The book reveals that she collapsed during the funeral of her own father. Then, at a cross denominational school in Dublin Bono met his future wife, Ali. The same week, in the same place, he joined a band that would go on to become the biggest rock band on earth, making iconic records for four decades and changing the face of what is expected from a live rock show.

The book is peppered with testimony, Bible stories and quotations

Bono has since befriended supermodels and American Presidents. He’s advocated for cancelling the debts of African countries, campaigned on the AIDS pandemic and even played a role in Northern Ireland’s Peace Agreement.

Of course I knew all of these facts already, but Alison was right. I didn’t know the feelings, and from the opening pages I was surprised by how much Bono wears his heart on his sleeve.

Surrender begins with Bono on an operating table in Mount Sinai Hospital in 2016 as a surgeon pulls his chest apart to fix an eccentric heart. It’s raw writing. And on it goes. Of course I knew the facts of his mother’s death and his subsequent struggles living in 10 Cedarwood Road with his father and brother Norman, but not the depth of his heartache. I knew about his dependence on Ali, but not their early kisses at bus stops; his emotional lack getting balanced.

As well as his heart, Bono lets us into his soul. That might be what has most kept my interest in U2 for all these years. And this book doesn’t disappoint. It is peppered with Christian testimony, Bible stories and quotations.

Two stories in particular reveal the depth of Bono’s faith. In the first he writes about having voice problems, explaining that anxiety was likely the cause. He then does something he has never done before. He visits a hypnotist who asks him to imagine a room of happy and safe memories. When asked to open a drawer and pick out the best memory, Bono finds himself walking by a river with his best friend. “Who is it?” asks the hypnotist. “Jesus”, Bono answers.

In the other story, Bono’s entire family go for a swim in the River Jordan, the site of Jesus’ baptism. He writes: “The symbol of baptism is about submerging into your death in order to emerge into new life, a powerful poetry, and I’m a fortunate man to have a family of foolish pilgrims who will follow me into this symbolism.”

Bono’s early faith was nurtured in the Shalom fellowship, one of so many house groups that popped up during the beginnings of the charismatic movement in the late 1970s. That congregation was full of spiritual energy, but lacked wise leadership. Initially seeing U2 as a missional arm to the youth, Shalom later turned on the band, believing rock music wasn’t a healthy place for young believers.

Under such influence, Edge left the band. Telling their manager Paul McGinness of their decision he played along to their piety and asked if God would be happy for his followers to not fulfil contracts. The break up was off. A vocation survived. It is frightening to consider the songs that would never have been written had Bono, Edge and Larry listened to their church leader and given up on music. Pastors… be careful.

Bono doesn’t hold back in his critique of religion and even corners of Christianity. He writes how, “at times religion can be the biggest obstacle in your path” and how Christianity seems to have become “the enemy of the radical Jesus”. He also mentions “The Bible Belt and its unchristian undertow leaving welts on the bare bottoms of unbelievers.” I did say poetic!

Is this - as some have claimed - the greatest rock memoir ever written? Perhaps. It is a fascinating deep dive into the feelings Bono experienced as U2 rocketed to fame. However, readers looking for the clichéd Sex and Drugs and Rock ’n Roll will be disappointed. This is a book about one man’s relationship with a girl, God and a rock n roll band… and the feelings within.

Steve StockmanSteve Stockman is the minister of Fitzroy Presbyterian Church in Belfast, N. Ireland and author of Walk On: The Spiritual Journey of U2.