Skillet has ‘declared war’ on deconstruction. But I think questions are healthy

The frontmen of two of the biggest Christian bands in the world hold opposing views on faith and doubt. Rend Collective’s Chris Llewellyn responds to John Cooper of Skillet’s contentious remarks 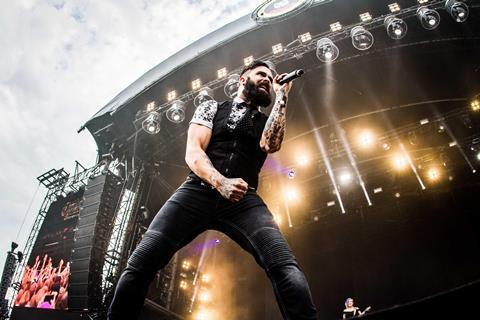 “I’m declaring war on deconstruction…they need to shut up!”

This was the battle cry of John Cooper, lead singer of Christian rock band Skillet (pictured, above), in front of an arena crowd on Winter Jam 2022 – arguably the most popular travelling Christian music festival in the world.

I wonder if John knows that if he had said the same thing on one of the many stages we’ve shared over the years, that he would have been declaring war on me.

I began re-examining my faith in 2009. (At that time the term ‘deconstruction’ wasn’t ferociously populating search engines – but the concept is as old as faith itself.) This was somewhat unfortunate timing, as it coincided with the year I signed my first record deal with an evangelical label. I was immediately immersed in the very systems I was questioning: suspiciously assessing the merit of the megachurch model; raising an eyebrow at sermons across the globe that seemed to lack the gracious inclusivity of the gospel and wondering about our lack of emphasis on matters of social justice.

They were challenging years, full of passionate discourse with God, intense wrestling with scripture, and soul searching. But it never once occurred to me that I needed to shut up. (It probably has occurred to my band mates, but not because they can’t live with my worldview!) My relationship with God was becoming more complicated, but also deeper and fuller.

Questions are healthy. Warfare is not.

The Psalms are full of uncomfortable questions. So many there’s no need to reference a specific verse – just open the book anywhere you like. The biblical prophets crafted stinging critiques of the religious systems of their day and explored the path to reform (consider Amos 5:21-24). Jesus himself challenged the religious establishment at every turn, calling into question almost every prevailing assumption about the kingdom of God, the Messiah and what righteousness actually looked like.

The Sermon on the Mount in particular has a pattern of clauses which follow the cadence: “You have heard it said…but I tell you…” Deconstructing Christians obviously don’t carry the authority to dogmatically overthrow historical Christian teaching, but surely there is sufficient precedent to show that the Church doesn’t always get it right and, sometimes, it needs to be challenged.

Deconstruction can be overly negative, bitter and cynical. But it can also be illuminating, rich and necessary. It can lead to a loss of faith, or to the emergence of a more weathered, mature and robust belief.

I’m not saying anyone should seek out a ‘dark night of the soul’ as St John of the Cross would describe it, but if it’s a place you’ve arrived at, I think it’s healthy to face it honestly – and with the support, rather than the rebuke, of the Church.

I’m always going to advocate for anything that drives a person to more desperately search the scriptures and pray like it matters. So I don’t declare war on the deconstructionists – or anyone else for that matter. I declare myself to be in support of anyone who is struggling in their faith and seeking to find God within that space.