Today, the United Nations commemorates victims of religious-based violence. But if we think that blasphemy laws are a thing of the past, the violent stabbing of Salman Rushdie should jolt us from our comfortable trance, says Lois McLatchie 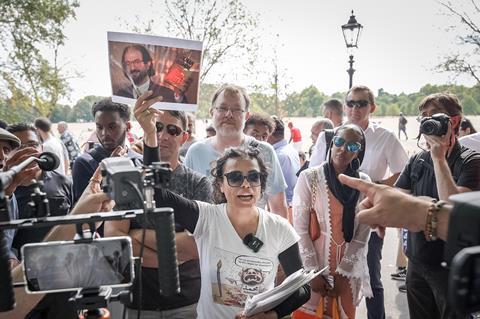 Hatun Tash holds aloft a photo of Salman Rushdie. Both figures have been the victims of violence after making outspoken comments about Islam

I’m a mid-20s millennial with a keen eye on current affairs. And until this month, I’d never heard about what has been happening to Salman Rushdie for the past 40 years.

On 14 February 1989, Iran’s Ayatollah Khomeini issued a fatwa against Rushdie, and anyone involved in publishing his (supposedly blasphemous) fourth novel, The Satanic Verses, which mocks and challenges central tenets of Islam. In 1991, the book’s Japanese translator was stabbed to death. In 1993, its Turkish translator narrowly escaped an arson attack which claimed the lives of 37 others.

It’s cliché these days to state the obvious: that my generation, here in the West, has had a relatively gentle ride. Comfort is our king. The police are our helicopter parents, pacifying rising distress against online insults that bruise our sensibilities. Our social media overlords tear anyone who might offend us from sight. Universities slap trigger-warnings on texts before we even reach the classroom. Censoring contrary ideas has become our coping mechanism. Concerns about free speech have been dismissed as the war cry of the radical right. We lack the experience to know why a society that silences speech and thought is the poison pill to the democracy which we depend upon.

But the violent public stabbing of Rushdie should jolt us from our comfortable trance. Rushdie’s ‘crime’ (and subsequent ‘punishment’) are not just a hangover from a tense situation in the Iranian 80s. Crackdowns on alleged blasphemy are as rife in 2022 as they ever were. There are people throughout Asia and the Middle East who live in daily fear for their lives because of what they say about faith, what they choose to believe or not believe.

Take Shagufta and Shafqat of Pakistan. The Catholic couple sat on death row for seven years, away from their four children - all on account of an allegedly ‘blasphemous’ text that they claim they never even sent. Shafqat, a wheelchair user, and his wife Shagufta, were sorely beaten upon their arrest.

With the help of international pressure, the courts eventually lifted their death sentence and acquitted them – after years away from their family and with limited access to justice. With support from ADF International, they escaped to Europe, away from a baying mob who would have gladly taken justice into their own hands upon their release.

Now, they’re telling their full story in a new documentary From Death Row to Freedom. When I met the family at the European Parliament recently, they told me just how many more people they knew of who were currently being held, also accused of ‘blasphemy’, waiting for their likely death and with limited hope of freedom.

From our homes in the UK, we’re not exposed to the harsh reality of what censorship and blasphemy crackdowns can mean for ordinary people. Scotland’s blasphemy law, for example - which hadn’t been in use for hundreds of years - was finally and famously repealed in 2021. But ironically, in the very same act of parliament, it was replaced by another blasphemy law by a different name.

The Hate Crime and Public Order Act will by no means throw the Shaguftas and Shafqats of this world on to a non-existent Scottish death row, nor result in firing squads lining up against the next Salman Rushdie. But it does put in place a culture where a prison sentence – of up to seven years - is considered a fit penalty for someone who says something considered to be ‘wrong’; who speaks out against the orthodoxies of the day.

And it’s an issue spreading across Europe. Societies which have taken freedom of religion, belief, speech and expression for granted for too long are reverting to censorship and ‘blasphemy’ laws to take down offenders.

A beacon of light

Just look at Finland, proudly titled the “happiest country on earth” in 2022. Under a section in their law titled: “war crimes and crimes against humanity”, the state brought the former Home Secretary, Paivi Rasanen, to court for her “hate speech”. Her crime? She had tweeted disapproval about her church sponsoring a gay pride parade in Helsinki, accompanied by a Bible verse. She’d also written a short pamphlet back in 2004 for her church congregation titled: Male and female, he created them and spoken about her views on Christian marriage in a radio interview in 2019. Her comments were deemed deeply blasphemous against the orthodox ‘church of woke’. The charges carried a possible two-year prison penalty. She won her case, but the state has appealed the court decision. She’ll be back on trial next year.

We can’t have it both ways. The West can’t claim to be a beacon of democracy, wagging its finger at the East while being happy to clamp down and convict perpetrators of “wrongthink” over here. We should do more than hope for safety and recovery for Rushdie. His attack is an awful wake up call. It’s an urgent reminder to value fundamental freedoms, even at the expense of our comfort.