Rt Rev Steven Croft has published a 52-page essay, Together in Love and Faith, explaining how his views on sexuality have changed and why he thinks it’s time for the CofE to allow same-sex marriage. But Peter Lynas says his arguments don’t stack up 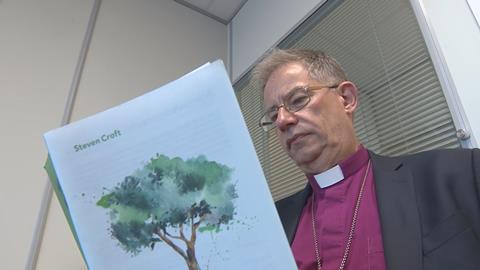 I appreciate the openness with which Rt Rev Steven Croft, Bishop of Oxford, has written about his change of opinion on same sex marriage, although I am far less comfortable with a bishop writing publicly about views which are contrary to current Church teaching. It’s publication, as the bishops together discern what proposals to bring to the General Synod in February 2023, is perhaps also not ideal. But I am not an Anglican, and will leave others to comment on the appropriateness of the bishop’s views and the timing of his communications. Here, I want to address some of the substance of his contribution.

Bishop Croft, like others, is concerned that Church and society are out of step. But rather than advocating for the Church to be salt and light to society, the bishop suggests that it needs to change to keep up with the morals of our progressive society. This is not a new idea. In 1 Corinthians, Paul writes explicitly on the conflict between the Church’s sexual ethics and that of the prevailing culture’s. Through sexual sin, Paul reminds us, we violate the sacredness of our own bodies and our union with Christ. Whilst many are arguing that the Church should take it’s lead from culture, Paul is clear that we should not.

The bishop also says his reflections are “personal” rather than primarily biblical. He has clearly been listening to others, but doesn’t mention any who take the traditional position. David Bennett has posted on social media about the growing wound inflicted “when my bishop comes out to defend what is not God’s way as though it were and tramples on the sacrifice of those who are obedient to God and the Church’s own teaching.” David’s book, A War of Loves (Zondervan), describes his own sacrifice as a gay celibate Christian and is notably lacking among Bishop Croft’s endnotes. Failure to even acknowledge these voices is surprising and deeply problematic.

Together in Love and Faith’s biblical engagement is primarily concerned with whether same sex marriage is consistent with the Bible. The ordering is notable - personal journeys, affirming voices and cultural morals all frame the scriptural engagement. There is some recognition that the texts do not support change, especially Romans. So, instead, some principles of interpretation are used to justify a new understanding of what the Bible means. The classic “Jesus is silent” argument is rolled out. This is deeply frustrating, as Jesus could hardly have been clearer when he re-affirmed marriage between a man and a woman and condemned sexual immorality. (Matthew 19:1-12).

We are human beings with sexual desires, not sexual beings who happen to be human

When clear support is lacking, the trajectory of scripture is used alongside “permission for development” to undo tradition. The bishop suggests that our increased knowledge about human sexuality and the human condition enable us to revise traditional teaching. C.S. Lewis called this “chronological snobbery” - the uncritical acceptance of new ideas as better than what went before. Context matters, but when ethics is crafted “in ways appropriate in each culture” faith becomes almost entirely subjective.

Being our best selves

Based on personal reflections, flexible ethics and the current context, Bishop Croft’s booklet is very much of the cultural moment. It is the latest in a series of calls that say institutions like the Church should exist to help people discover who they are and be their best selves, not shape or form people.

The cultural waters we are swimming in are incredibly powerful. In short, the cultural story is that sexual fulfilment is key to happiness. Sex is less what we do and more who we are. Our desires or orientations define us and give us our identity. Tolerance is no longer enough, recognition and affirmation are required. Objections to actions are seen as a denial of one’s identity. Disagreements on what we do become disagreements about who we are, transforming disagreement and hurt into harm and abuse.

But the Church is a community of conviction, centered on Christ, who calls us to lay down our lives and follow him, going into the world to make disciples. Admittedly, this becomes much more challenging in a world of identity politics and intersectionality. A culture in which meaning isn’t static and everyone, like the bishop, is on a journey.

This journey often leads to deconstruction. This can be healthy when people use the Bible to critique the culture and the Church - which Jesus did in the Sermon on the Mount. But too often we see the reverse - using culture to critique the Bible. When scripture and the tradition don’t line up with what we think and see and feel, it is the biblical ethics that are deconstructed. John Mark Comer observes that pastorally, this kind of progressive Christianity is a stop-over on the way to post-Christianity - it can’t hold any kind of robust discipleship because it has no ethical stance against the world. We have entered Genesis 3 territory, bringing our prior moral assumptions and redefining what is good and evil on our own terms.

Not an equality issue

My third concern is the bishop’s definition of “the goods of marriage” as a “permanent, stable and faithful relationship”. By attempting to redefine marriage as simply a product or service offered by the Church, he then makes the argument for extending it’s benefits to same sex couples as being one of equality.

And what if three or four people are in a permanent, stable and faithful relationship - should the benefits of marriage be kept from them? I cannot see any argument against it - if the vehicle is good, the more the merrier. But polygamy is still widely frowned upon, so the cultural argument cuts the other way, for now, in this particular case. However, the logic of the argument stands, leading the door open to further redefinition as culture shifts.

My final question is how Bishop Croft justifies giving freedom of conscience to those with a traditional (some might say biblical) view of marriage. Why do I say that?

In arguing that same sex marriage is a justice issue, the implication is clear: those who hold a traditional view of marriage are unjust. The bishop also argues that the current position is harmful because it denies a good to people. So if it is a justice issue and if it causes harm, there should be no freedom of conscience. Based on his own argument, freedom of conscience can at best be a temporary accommodation as people learn to do better. The bishop seems to be genuinely trying find a compromise, but based on his own argument, his solution cannot work.

Disagreements on what we do become disagreements about who we are, transforming hurt into harm and abuse

The conclusion is a call for change, but what if there isn’t one? The Church of England has a long held position, and I presume there is a decent chance that it may maintain its current stance. Where then for those with a revisionist view? I don’t understand those who change their minds and then think everyone and everything else has to change to accommodate them.

I agree with Bishop Croft that we need to start from a place of compassion. The Church has got stuff wrong, especially in the area of sex and sexuality. People have been harmed and we need to apologise and do better. I believe the bishop’s intervention is well intentioned but, ultimately, it is misguided.

Like much of our culture, it is shaped and formed by thinkers like Rousseau and Freud. Uniquely within history, our culture has made sex and sexuality defining. Too many suggestions accept this premise and work within this paradigm. The Church must challenge this story, and tell a better one to a culture that is deeply, sexually broken. We are human beings with sexual desires, not sexual beings who happen to be human. We are made in the image of God, and it is this that truly defines us, not our sexuality.

Love of God is key to human flourishing, not sexual fulfilment. Our desires are not all God-given. We should not simply be authentic to them - that is to deny the reality of Genesis 3. Christian living is about submitting our desires to the will of God.

We need to stop telling the story that sex is bad or dirty but that is a gift, miraculously redeemed within marriage. Marriage is not for everybody, and we are all called to be chaste outside of it. Sex is a source of intimacy, but not the only one. Celibacy is a sacrifice but not a second rate option, as David Bennett notes.

We live in a broken world, and we all experience this in different ways, including our sexuality. But mercy, forgiveness, healing and restoration are available to us all. Communities of welcome and counter-formation that challenge the dominant cultural narrative are required. This is the place of the Church, bringing people together in love and faith.