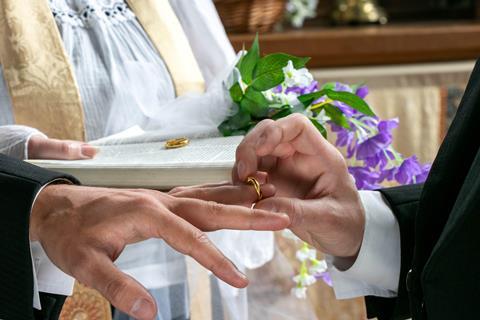 The Bishops of the Church of England have finally announced what they want to do at the end of the Living in Love and Faith process.

In a press release, they announced that they will be issuing an apology to LGBT people for the “rejection, exclusion, and hostility” they have faced in churches.

Bishops have also decided to “offer the fullest possible pastoral provision” to same-sex couples “without changing the Church’s doctrine of Holy Matrimony”. This will include “a range of draft prayers…which could be used voluntarily in churches” to bless same-sex partnerships.

The bishops also plan to replace Issues in Human Sexuality, which binds clergy to celibacy outside of heterosexual marriage, with new pastoral guidance.

The basis for these proposals is given in large bold letters: “God is love, and those who abide in love abide in God, and God abides in them” (1 John 4:16).

The Archbishop of York describes this as “not the end of that journey” but “a milestone” which, he hopes will “provide a way for us all to celebrate and affirm same-sex relationships.”

This is not an abstract academic issue, but one which affects real people. Many have been hurt by the way they have been treated by the Church. Sincere apologies should be given to specific individuals where that is the case.

We cannot apologise for following Christ and proclaiming his word, as if that was not somehow the best way for us all to live. But we can and should apologise where we have fallen short of the standards demanded of us in God’s word.

All of us who are fallen and sinful human beings can be made whole and holy by Jesus as we repent of our sins and believe in him. Everyone should be welcome in our churches to explore that call to repentance and faith; not just certain kinds of sinners, but all of us.

There are four reasons why I believe Christians should oppose this latest move by Church of England bishops.

1. We can’t bless what God curses

How can we promote, bless and celebrate things which God has not blessed? It isn’t good enough to throw 1 John 4:16 into this debate like a grenade and think that is sufficient to establish that he approves of same-sex relationships. This text is beloved of revisionists (and is probably where the title Living in Love and Faith comes from) but is rarely unpacked in context.

People seem to want it to mean that it doesn’t matter who or what you love, God is in you if you love at all. But is it possible to live in sinful love and to hold to the Christian faith? Or does orthodox Christianity rule out certain kinds of love?

Our loves are meant to conform to God’s loves. If they go against his will, we do not live in God nor he in us

I was recently denounced on Twitter by a gay activist clergyman for even using the phrase “sinful love”. Apparently, there’s no such thing, only love - defined any way we want - and it’s homophobic to suggest otherwise, he said. But the rest of 1 John has much to say about what we love and desire: “Do not love the world or anything in the world. If anyone loves the world, love for the Father is not in them. For everything in the world - the lust of the flesh, the lust of the eyes, and the pride of life - comes not from the Father but from the world. The world and its desires pass away, but whoever does the will of God lives forever” (1 John 2:15-17).

That phrase about “doing the will of God” defines what John means by love. Our loves are meant to conform to God’s loves. If they go against his will, we do not live in God nor he in us, and we will not live forever. That’s what 1 John - and the rest of the New Testament - is saying when it insists that certain behaviours (including but not exclusively sexual behaviours) will exclude people from the kingdom of God (see 1 Corinthians 5; Galatians 5; Ephesians 5). That’s why this is so serious. We need to know what love is, if we want to live forever. Not all love leads to God.

So how can we tell people that something God has said will lead to death, will actually lead to life? Is it not wicked of us to lie about something so important? Will we avoid God’s judgement if we knowingly lead people astray like this? How can we bless what God detests? Or as John Calvin once put it: “How can anyone have the effrontery to expect that God will aid him in accomplishing desires at variance with his word?” (Institutes 3.7.9)

2. This is a change of doctrine

It is, at best, a sleight of hand and, at worst, a downright lie to claim that blessing same-sex marriage relationships in church is not a change in the Church’s doctrine of marriage.

Sex outside of heterosexual marriage is sinful, and has always been recognised as so by the Church and by the General Synod. To change this, in order to bless homosexual relationships, is not just a piece of minor tinkering.

Thomas Aquinas said that if someone teaches that God is not a Trinity, or that sexual immorality is not a sin, then they are a heretic (see his commentary on Titus 3). That has always been the universal teaching of the Church.

To accept this change is to change our doctrine and practice, because our practice reflects our doctrine. It would make us heretics, just as surely as if the bishops told us we could use Unitarian prayers and were at liberty to argue against the doctrine of the Trinity. The bishops can’t make it a non-change simply by stating that this change is not a change. For us to swallow such casuistry requires far too much mental gymnastics. It convinces no-one.

Some say the status quo is the only option. I say that the Church has already slipped away from reflecting orthodox doctrine in its recent changes to practice, and needs to return to orthodoxy, not just stick where it is. But what it cannot do is abandon orthodoxy while pretending it hasn’t, just because technically it won’t call same-sex blessings “marriage”.

Canon law B4.1 states: “The Convocations of Canterbury and York may approve…forms of service… which in both words and order are in their opinion reverent and seemly and neither contrary to, nor indicative of any departure from, the doctrine of the Church of England in any essential matter.”

So any liturgy which blesses same-sex relationships simply cannot be permissible under canon law, as they would indicate an obvious departure from the doctrine of the Church of England in a matter which both sides recognise as absolutely essential. If clergy can be disciplined or rebuked for tampering with liturgy, especially in wedding services, then why do the bishops think they can propose liturgies which signal the most fundamental shift in Church doctrine since the Reformation?

4. This compromise is unworkable

The main question ought to be: does this please God, or not?

But God seems to have been sidelined in favour of a political balancing act. What the Leader of the House of Commons thinks seems to have more weight than what God thinks. There is an existential choice facing the Church: we can please God, or we can please the state. As Joshua Penduck says, if we give in and change our doctrine (in law or in practice), “we will stop being the centre of a vibrant, growing communion of (in the main) black and Asian poor, and instead become the centre of a declining communion of (in the main) rich, middle-class white people.”

This sort of pastoral accommodation puts huge pressure put upon clergy and churches who do not wish to see these changes. Will bishops defend and protect such people from the press and the outraged hordes on social media if their local vicar refuses, however sensitively, to perform one of the new blessings?

Will they help them, when links with church schools and other local groups are adversely affected by such a stance, which has been in line with the universal teaching of the Church for the last 2,000 years?

It seems unlikely, given how quick many of them have been to virtue-signal on this topic on social media. Are there any bishops publicly defending the orthodox line online?

This issue has the potential to split every parish in the land, creating mini-schisms in every PCC and deanery as some adopt the changes and some don’t. Multi-parish benefices will become even more unworkable. Not to mention the unhappy fate of optional orthodoxy (the idea that, where orthodoxy is made optional, it will sooner or later be proscribed and forbidden).

The Archbishop of York says this is “not the end of the journey” - he expects there to be further changes down the road. So this unsustainable and unstable compromise cannot stand.

There is a correlation between progressive ideology and church decline. Liberalism has emptied many churches over the last 100 years. Why would we want to keep on down this road?

There has been no convincing argument made for changing doctrine and practice. Living in Love and Faith provided no biblical justifications for a shift of this magnitude. The Bishop of Oxford made no real attempt to argue his case for change from the Bible (and was ably countered by Vaughan Roberts). The Bishop of Worcester made a puerile point about Solomon having hundreds of wives, which apparently proves there is no biblical doctrine of marriage; hardly biblical scholarship. Again, Martin Davie easily takes his argument apart.

It is, at best, a sleight of hand to claim that blessing same-sex relationships is not a change in Church doctrine

It is insulting that clergy study theology and the Bible before being ordained, and yet bishops have made no attempt to argue a case for change either biblically or theologically; preferring instead sentimentality, pragmatics and cultural accommodation.

But scripture must remain our standard. As Kirsten Birkett says: “Whatever the topic, if the Church has agreed, almost universally, for pretty much all of its history, it is unlikely that a new and innovative reading is correct. It is not impossible: but those who would advocate a new reading have a huge burden of proof to meet. There must be truly overwhelming biblical evidence that the new reading is reasonable, and more reasonable than the old.”

It is time for those who have failed to persuade us of the biblical basis for changing doctrine and practice to move on. There are plenty of other denominations which will affirm your liberal views.

It has been encouraging to see Church of England members with orthodox views working together over the last few years.

We need to unite, with a determination to safeguard the Church from the spiritual harm that will be done if these changes are implemented.

Now is the time to talk and pray together as we seek the Lord amid the turbulence and uncertainty. As 2 Chronicles 20:12 says: “When many are ranged against us, we must pray: ‘We do not know what to do, but our eyes are upon you.’”

This article first appeared on the Church Society website and is re-used with permission. Read it in full and find out more about their work here

Lee GatissRev Dr Lee Gatiss is a theologian, author, Church historian and the director of Church Society. His latest book is Fight Valiantly: Contending for the faith against false teaching in the Church.