As we say the final goodbye to our late monarch, Queen Elizabeth II, Catherine Pepinster decodes the funeral service that Her Late Majesty personally planned 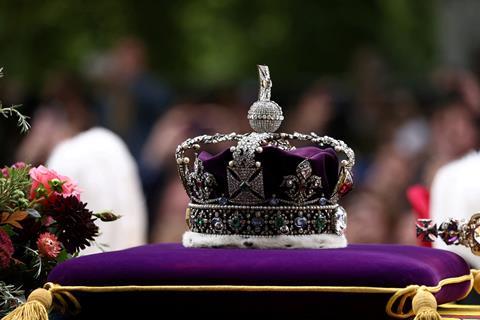 The Queen’s state funeral today at Westminster Abbey was the biggest religious event in this country since the Coronation in 1953. It was full of pomp and grandeur as it marked the passing of the monarch who is also Supreme Governor of the Church of England.

But it was also an occasion, as any Christian funeral is, to mark the life of the person who has died, to comfort those who mourn, but above all a reminder that salvation comes from Jesus Christ, who died, was buried, and then rose from the dead after three days.

It has long struck me that probably more people heard about Jesus’ life and teaching through Queen Elizabeth II’s Christmas Day messages than heard about Christianity at a Christmas church service. The Queen was, in that sense, a teacher of her faith and she spoke to those who believed, those who weren’t sure and those who knew barely anything about Christ.

That approach was also taken at her funeral today by Most Rev Justin Welby, the Archbishop of Canterbury. The Archbishop explained to not only those in the Abbey but a congregation of billions around the world, watching on the television, that Christianity is, above all, not so much about how you live as who you follow. How you live then flows from that, and so Elizabeth II committed herself to service – to serving the people but above all to serving God.

The Archbishop’s words followed the reading from John 14 (v1-9), in which Jesus reassured his disciples that there is a place in heaven for all his followers: “In my Father's house are many mansions: if it were not so, I would have told you. I go to prepare a place for you." Thomas, always the doubter, says to him: “Lord, we know not whither thou goest; and how can we know the way?"

Archbishop Welby said: “Jesus, who in our reading does not tell his disciples how to follow, but who to follow, said: ‘I am the Way, the Truth and the Life’. Her Late Majesty’s example was not set through her position, or her ambition, but through whom she followed.”

As the Archbishop put it, the Queen was an example of servant leadership, something that she modelled on Christ. That devotion was grounded in hope, a hope that was evident throughout the funeral service.

The first lesson, read by Baroness Patricia Scotland, Secretary-General of the Commonwealth, was from 1 Corinthians 15 and celebrated Christ’s triumph over death. It promised his steadfast followers that “your labour is not in vain in the Lord”. Hope too, was evident in the hymn, based on Psalm 23, ‘The Lord’s My Shepherd’, with its verse: "Goodness and mercy all my life / Shall surely follow me / And in God’s house for evermore / My dwelling house will be."

Hope was also present in the anthem sung just before the blessing with the words from Romans 8: "For I am persuaded, that neither death, nor life, nor angels, nor principalities, nor powers, nor things present, nor things to come, nor height, nor depth, nor any other creature, shall be able to separate us from the love of God, which is in Christ Jesus our Lord."

The anthem was a new composition by Sir James MacMillan, specially composed for the funeral. So, too, was the piece of music by Judith Weir, inspired by Psalm 42: “As the deer pants for streams of water, so my soul pants for you, my God”.

These two commissions showed the hand of Queen Elizabeth in the choices made for the funeral. She planned it herself and chose the hymns, including ‘The Lord’s My Shepherd’, also sung at her 1947 wedding to the Duke of Edinburgh, and the choral work ‘O Taste And See How Gracious The Lord Is’, based on Psalm 34, and written by Ralph Vaughan Williams for the Queen’s Coronation.

The funeral mixed ancient ceremony with those special memories of the Queen’s own past, and then a nod to the present with those musical commissions. There was another innovation too, with an unprecedented involvement of representatives of other faiths and also Christian denominations.

So while this remained a Church of England service, it was also deeply ecumenical. Leaders from different denominations took turns to read a prayer, some of thanksgiving, others asking for comfort, while one asked for prayers for the new King and his family.

They ended with John Donne’s famous words: “Bring us, O Lord our God, at our last awakening into the house and gate of heaven, to enter into that gate and dwell in that house, where there shall be no darkness or dazzling, but one equal light; no noise or silence, but one equal music”.

Throughout the lying in state, during the funeral, and later during the committal at St George’s chapel, Windsor, the Queen’s Imperial State Crown, which she always wore at the state opening of Parliament, together with the sceptre and orb, lay on the coffin. The sceptre, represents justice and mercy, while the orb with a cross atop it, symbolises the earth which is Christ’s dominion. Everyone – even kings and queens – are ruled by him.

The Crown will be seen again at a state opening of Parliament. The orb and sceptre, which the Queen never held again after her Coronation, will return today to the Tower of London, to be used again at the coronation of King Charles III. On that day, the orb will remind him, as it reminded his mother, that the entire world, even monarchs, are the dominion of Christ.