Justin Welby: All who follow the Queen’s example can say, with her: ‘We will meet again’

Initial reactions from Christian leaders online suggest the Most Rev Justin Welby, Archbishop of Canterbury, struck just the right chord with his short but sweet tribute to a Queen who served God and strove to point others to him. Here’s his sermon in full 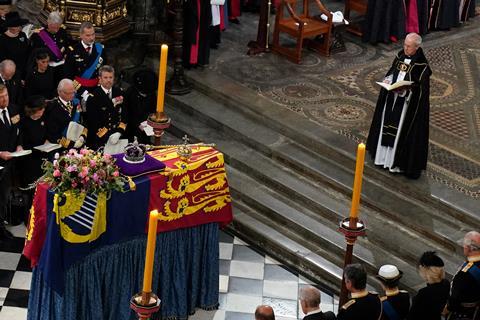 The pattern for many leaders is to be exalted in life, and forgotten after death. The pattern for all who serve God, famous or obscure, respected or ignored, is that death is the door to glory.

Her Late Majesty famously declared, on her 21st birthday broadcast, that her whole life would be dedicated to serving the nation and Commonwealth. Rarely has such a promise been so well kept. Few leaders receive the outpouring of love that we have seen.

Jesus, who in our reading does not tell his disciples how to follow, but who to follow, said: “I am the Way, the Truth and the Life.”

Her Late Majesty’s example was not set through her position, or her ambition, but through whom she followed. I know His Majesty shares the same faith and hope in Jesus Christ as his mother; the same sense of service and duty.

In 1953, the Queen began her coronation with silent prayer, just there at the high altar. Her allegiance to God was given before any person gave allegiance to her.

Her service to so many people in this nation, the Commonwealth and the world had its foundation in her following Christ, God himself, who said that he came not to be served but to serve and to give his life as a ransom for many. People of loving service are rare in any walk of life. Leaders of loving service are still rarer.

But in all cases, those who serve will be loved and remembered when those who cling to power and privileges are long forgotten.

The grief of this day, felt not only by the late Queen’s family but all around the nation, the Commonwealth and the world, arises from her abundant life and loving service now gone from us.

She was joyful, present to so many, touching a multitude of lives.

And we pray today especially for all her family, grieving as every family at a funeral - including so many families around the world who have themselves lost someone recently – but, in this family’s case, doing so in the brightest spotlight. May God heal their sorrow. May the gap left in their lives be marked with memories of joy and life.

Her Late Majesty’s broadcast during Covid lockdown ended with: “We will meet again”, words of hope from a song by Dame Vera Lynn. Christian hope means certain expectation of something not yet seen. Christ rose from the dead and offers life to all. Abundant life now and life with God in eternity.

As the Christmas carol says: “Where meek souls will receive him still / The dear Christ enters in”.

We will all face the merciful judgement of God. We can all share the Queen’s hope which, in life and death, inspired her servant leadership.

Service in life, hope in death. All who follow the Queen’s example and inspiration, of trust and faith in God, can with her say: “We will meet again.”