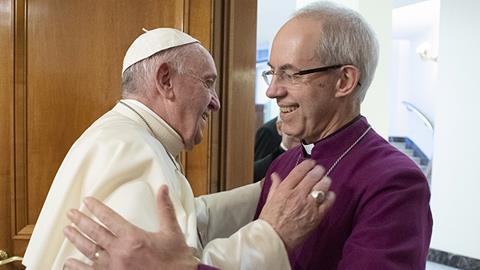 Justin Welby: Every Christian is called to seek reconciliation

In a divided world, the Church is called to unity. Writing ahead of the release of his new book on reconciliation, the Archbishop of Canterbury Justin Welby says our oneness is how the world will know that Jesus Christ is Lord

In 1966 my predecessor as Archbishop of Canterbury, Michael Ramsay, officially met the Pope for the first time since the Reformation. They had agreed, after centuries of conflict and bloodshed, to set up dialogue in doctrinal and practical issues between the two churches and signed a ‘Common Declaration’. As they were leaving the basilica of St Pauls in Rome, the Pope drew Archbishop Ramsay aside and gave him a ring – the ring the Pope had worn as cardinal Archbishop of Milan. This recognition of his episcopal vocation was a profound gesture of reconciliation that brought Archbishop Ramsay to tears.

This was the same ring I wore in April 2019, when Pope Francis, the Moderator of the Church of Scotland and I hosted a retreat at the Vatican for the warring leaders of South Sudan. Pope Francis knelt at their feet and implored them to make peace. The retreat was remarkable not just for His Holiness’ humility and the clear presence of God with us, but it was a sign of just how far the churches themselves had come in living together and loving one another by the grace of God, and how that reconciliation had enabled us to make God’s desire for peace known in one of the most battle-scarred nations in our world.

I was reminded, during those remarkable days, of Jesus’ last public prayer in John 17:21 – "That all of them may be one, Father, just as you are in me and I am in you. May they also be in us so that the world may believe that you have sent me.” This oneness is the calling of each Christian. Not just because it’s nice to have or the right thing to do, but because our oneness is how the world might know that Jesus Christ is Lord. It is this oneness that gives our mission of reconciliation integrity. In a broken world, marred by war and violence, conflict and strife, reconciliation is the voice of hope that promises renewal. It is the possibility of new beginnings, new life, new relationships – with each other and with God.

Reconciliation is the story of God’s new creation.

We face a time where the most probable outcome of the next thirty years will be greater pressure on how we live with one another than ever before – in geopolitical, economic terms, in terms of climate change and scientific and technological advances. From living in the shadow of Russia’s invasion of Ukraine and war in many other places around the world, in a cost of living and global food crisis.

What is our calling in a world which we seem so intent on tearing apart in order to keep the pieces for ourselves? Or, more accurately, how does God call us to join his work of putting the shattered pieces back together - to be reconciled to our planet, to one another, to ourselves and to him?’

In a divided world, Christians need to be one family

In a divided world, Christians need to be one family. That does not mean we all have to be the same; The Anglican Communion alone is vastly diverse. It contains within it a multitude of difference and disagreement. It’s how we handle those differences that marks us out as different, that makes us known as the Church of God and makes Jesus known as the redeemer of the world.

In this era of rapid technological development, with the advent of smartphones and social media sites that connect us with people around the world, we see diversity at an unprecedented level. In the 19th century, the divisions within the Anglican Communion and between different Christian denominations were certainly as complicated as they are now, but they took several months to be communicated by ship. Now, we hear about conflicts and tensions in real time, different accounts from many different sources. The danger is that we become people of communication, but not of community. Community takes time, commitment and trust.

I remember working once with a Muslim community and a Christian community that had been involved in serious riots in which many people had been killed. A Christian pastor, after lengthy heart searching, led his people to seek engagement with the local Muslim community. They started by buying bread from the Muslim baker.

When the baker suddenly found his business taking off with Christian customers, the local Imam went to see the pastor to find out what was happening. The pastor explained, and in answer to the Imam’s offer of help, requested that elders from the mosque should spend time on Sunday around the church, as Muslim youths were throwing petrol bombs at it. The Imam agreed, and asked that the Christians did the same thing to stop the Christian youth throwing petrol bombs into the mosque in their times of prayer.

Over the next 18 months dialogue slowly developed, until they were working together for the common good digging a sewage system in the area. Although they were still arguing ferociously with each other, their spades, picks and shovels were used not as weapons but to improve their shared environment. They had built the trust and relationships that enabled them to live together as a community.

Because we are human, we will inevitably disagree. Where we disagree, we must learn to disagree well. Disagreeing well means reshaping ourselves, to look outwards and respond to the crises that surround us, with the love of God that is within us, and with the unity that can be reached between us.

That is a massive challenge to us in a world where individualism and atomisation are often admired, difference is often interpreted as threat, and disagreement is perceived as challenge to our identity and being. It is also a challenge when, historically, we have so often created God in our own image. As Voltaire said: ”In the beginning God created man in his own image, and man has been trying to repay the favour ever since.”

But through our collective, creative, and congregational existence, we learn that the image of God can be seen in every tribe and tongue. We must not try and put human limits on the divine and limitless God. The Church must find its way to visible unity, maintaining its profound and wonderful diversity, because of the nature of God. 2 Corinthians 5:20 reads: “We are therefore Christ’s ambassadors, as though God were making his appeal through us. We implore you on Christ’s behalf: Be reconciled to God.”

The difficulty of reconciliation is something Christians must be prepared to face. In John 16:12 there is a word which means to carry, or to bear: 'bastazein’. The same word is used in Isaiah 53 for bearing sins. There is this sense that the cost of reconciling is to bear pain, loss and suffering. That is the place of a church that looks like Jesus: sacrificial and serving.

One dark night in 1940, in the midst of the Second World War, Coventry Cathedral was bombed. In the aftermath, amid the destruction and the smoke and the horror of Coventry at the time, Provost Richard Howard had the words ‘Father Forgive’ inscribed on the wall behind the Altar.

On Christmas Day 1940, Provost Howard preached at the 10 o’clock BBC service and said that after the war they would rebuild "a more Christ-Child-like world". They took the thousands of nails strewn over the floor of the Cathedral and turned them into crosses – one of which I wear today. This is what bearing the burden of reconciliation looks like; to turn away from revenge and follow God towards healing and hope.

John’s Gospel tells us clearly what our place is. The commands of Christ from John’s Gospel are to wash feet and love one another: service and love.

What does service and love look like in reconciliation for us as we navigate the complexities of our lives?

There is a team working at Lambeth Palace who have developed a course called the Difference Course. Through 5 sessions, participants develop three habits which, when practised, are transformational.

The first habit is to be curious. Not circling the wagons or defending ourselves, but truly wanting to know others, to hear their stories and understand their perspectives. Not leaping to judgement, but seeking to cross boundaries. It calls us to look outwards beyond ourselves, to challenge preconceptions. It’s a challenge to look at others through God’s eyes rather than our own.

The second habit is to be present. This means having the courage to encounter others with authenticity, giving them our full attention - even when we disagree with them or find them difficult. On some occasions, it means having the humility to recognise our own fears and flaws, and trust in God’s grace to work through them. On others, it will mean having God’s strength to uphold a conviction with love. In the face of conflict and unhealthy power imbalances, it will mean deep lament - being present to a broken reality and not naively perpetuating abuse.

The final habit is to reimagine. Reconciliation requires the moral imagination to hope for something different, even after generations of repeating the same cycles of violence. It means not seeking to prevail, but being open to seeing something brand new, which is the work of the trinitarian God.

Blessed are the peacemakers

What we see in the gospels is Jesus’ reconciliation to those we consider to be ‘outside’ as well as (or perhaps even more than) inside: to the younger son as well as the elder in the Parable of the Prodigal Son, to the disciples as well as the Syrophoenician woman, to the woman at the well accused of adultery and Zaccheus the tax collector. Jesus reaches beyond boundaries and gathers us together as part of a new people with a new identity. He calls us to dare to imagine, to hope, what things might look like beyond the limitations we impose on ourselves, who we might be together.

Jesus reaches beyond boundaries and gathers us together

The capacity, the willingness and the ability, holistically and in partnership, to work together in a world torn apart by war and want, points to the Prince of Peace. The promise of reconciliation points towards hope, even in the shadow of the Cross.

"Blessed are the peacemakers" reads Matthew 5:9, "for they will be called children of God".

I pray each of you, beloved children of God, might go and live out your calling: to be a seeker and a speaker of peace. Whether within your own heart, in your family, at work, with fellow Christians, between nation and nation, or with our hurting planet, may you play your part of God’s work in God’s world, that the entire world might know the reality of Jesus Christ.