The new Bishop of Blackburn opposes female ordination. Is CofE unity at risk?

The appointment of Rt Rev Philip North as Bishop of Blackburn has reignited the debate within the CofE over views on female ordination – and may have implications for upcoming debates on same-sex marriage. Heather Tomlinson explains 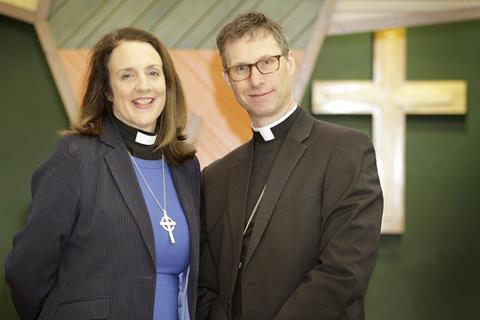 Rt Rev Philip North, Bishop of Blackburn, with Rt Rev Dr Jill Duff, Bishop of Lancaster, who oversaw the consultation on his appointment

Can conservatives and liberals work together in the Church of England, or will they eventually need to split?

The response to the appointment of the new Bishop of Blackburn may be a key indicator.

Women’s campaign groups within the Church of England have strongly opposed Rt Rev Philip North’s new role, despite his reputation as a voice for the poor and as an excellent pastor.

That’s because North is a traditionalist Anglo-Catholic who disagrees with the ordination of women, which angers many feminists within the Church. Yet he has also been warmly welcomed to his new role as the Bishop of Blackburn by many women who have worked with him.

This backing may prevent a repeat of events in 2017, when North was forced to decline the role of Bishop of Sheffield after an outcry from those who opposed his appointment. Events became so acrimonious that the Most Rev Justin Welby, Archbishop of Canterbury, called for an independent review, although not all female priests were against his appointment.

Protests also led to North stepping back from his first appointment as a bishop in 2012, to the suffragan (junior) role in Whitby.

The new appointment will, undoubtedly, put pressure on the uneasy compromise that exists across the Anglican Communion regarding the issue of women in ministry.

The Anglican Church is very broad theologically on social issues such as gender and sexuality. A disagreement over female bishops was meant to be settled by something called the “House of Bishops Declaration” in 2014 which includes the aim of “mutual flourishing” for clergy on both sides of the debate.

However, the row over North’s nomination for the role of Bishop of Sheffield raised questions about whether this was even possible. The independent review found that a theologically conservative appointment such as Bishop Philip’s was consistent with the Declaration – but further work was needed to find out if it would be workable in practice.

If the opposition to his new role becomes severe, it may lead to a fundamental rethink of any agreement between the liberal and conservative wings of the CofE.

Bur North’s appointment also has wider ramifications, particularly regarding the Anglican debate on same-sex marriage. Clergy who are conservative on this topic hope they will be provided for in a similar way to clergy who oppose female bishops. Yet, if traditionalists such as Bishop Philip are not able to act as senior bishops under such arrangements, this could weaken the chance of agreement.

“My dream is to be part of a church in which I am fully supported by my bishop, and in which I fully support my bishop,” said Rev Ed Shaw, who is a member of the CofE General Synod and well known for his conservative beliefs about same-sex attraction. “The muddle the Church of England has got itself into on sexuality and gender means that feels increasingly unlikely - unless we embrace new structures that allow this to happen.”

Bishop Philip’s new role is effectively a promotion, meaning he will now oversee the whole Diocese of Blackburn, including all clergy. He has held the more junior suffragan role of Bishop of Burnley since 2015, but it is the new, greater authority that feminist groups oppose.

Women and the Church (WATCH), a campaign group that works for “gender justice, equality and inclusion in the Church”, said it could not support North’s new appointment. In a statement issued on their website, they said that “some female clergy would struggle to flourish under his oversight.”

“When parishioners come to understand that their bishop is not personally confident that female priests can undertake priestly roles, such as consecrating the bread and wine, this undermines the authority of their vicar, if she is a woman,” they continued.

Several female priests have also publicly criticised the appointment, including Rev Naomi Nixon, chief executive of the Student Christian Movement, who tweeted: “When I had a bishop who wouldn’t ordain women it felt like there was a question mark lurking over us.”

If Christians cannot relate to each other with love, how can we transform a nation in the name of Christ?

The Diocese of Blackburn has attempted to head off such criticism with a statement from Bishop Philip, in which he states that: “female clergy in Blackburn diocese are fully and equally part of the Diocese and have a ministry that is grace-filled and transformative.”

However, it remains the case that he opposed the ordination of women, to the extent that at his consecration, Lord John Sentamu, then Archbishop of York, did not take part in certain parts of the service because he ordains women himself, giving way to other bishops with more conservative convictions.

Although against female ordination, Bishop Philip has a strong track record on campaigning for the eradication of poverty. He has repeatedly attacked trickle-down politics, tweeting that they “benefit only the rich” and has called for “urgent and coherent government action” to prevent the current cost of living crisis turning into “a winter of destitution” for the poorest in our society.

Earlier in the year, he accused the Conservative Party’s leadership elections of deteriorating “into a competition to see who can be most spiteful to some of the world’s most vulnerable people.”

Speaking about his new role as Bishop of Blackburn, Bishop Philip said he has three priorities: growing the Church to “build joyful Christian communities”; being an “ever-stronger voice for justice, especially for the poorest”; and putting children and young people at the “very heart of all that we do”.

North’s positive engagement with important social issues may have won over some of his more liberal colleagues. His new role has been welcomed by Anglicans across the theological spectrum, with Lord Sentamu tweeting: “This is such good news” and Most Rev Stephen Cottrell, the current Archbishop of York, describing Bishop North as an “evangelist” and a “friend of the poor”, saying he was hugely excited about his appointment.

And female opposition to his appointment is far from universal. Importantly, Rt Rev Dr Jill Duff, Bishop of Lancaster, who oversaw the consultation on his appointment, said: “I have found much joy in serving alongside Philip as a fellow suffragan bishop for the last five years. He has inspired me, encouraged and greatly supported me”.

Following 2017 events in Sheffield, Rev Canon Fleur Green, who had worked with North in Blackburn, told Premier that she had written a letter in support of his appointment. Other female clergy had also “emailed with personal stories of why they wanted to support Philip, because he’d been so supportive of them both pastorally and in their ministry,” she said.

At that time, Bishop Philip said the personal attacks on him had been “extremely hard to bear.”

“If, as Christians, we cannot relate to each other within the bounds of love, how can we possibly presume to transform a nation in the name of Christ?”