Whatever your views on gender and sexuality, Christians must listen to one another

Taking sides without properly listening to the arguments that don’t match our own may be the undoing of us, says George Pitcher. Stop your ears at your peril. 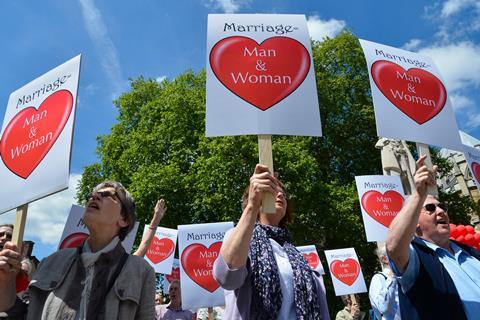 When we talk of issues like same-sex marriage, columnists usually take a position and argue vehemently for or against it. This isn’t one of those columns.

To use the time-honoured phrase of those struggling with very different views: we need to talk. Especially about something as contentious and important as same-sex marriage.

And especially with everything that’s happening in our political and religious life around gender. The UK government is blocking Scotland’s gender recognition reform bill. Moves are afoot to ban gender-identity conversion therapy.

Amid the turmoil, the Church of England has indicated that in its own forthcoming parliament, the General Synod, it intends block same-sex marriage but allow blessings of same-sex couples.

My own view to date is easily available to read – I applaud the Church’s compromise of standing by what marriage has always meant, while blessing God’s love wherever it’s found. But a dinner conversation with a family member at Christmas showed me the deep conviction with which the same-sex marriage argument is held – and how intellectually sound it is.

So my view may be, as it were, in transition.

In summary, the case put to me was that true gender equality will never be won until gender itself is abolished. However rattled we might be at the extremity of that opinion, it has to be recognised as rational. If one removes the difference between two objectively defined things, they obviously become the same, beyond being equal.

One can argue in response that there’s a difference between equality and uniformity and that calling something the same doesn’t intrinsically make it so – which is essentially the view that a human with male genitalia isn’t a woman – but take gender away from identity within the human species and, like it or not, we’re in a very different, liberated place.

I had assumed that I was a reasonably right-on defender of women’s rights. Alongside author JK Rowling and shamefully victimised columnist Suzanne Moore (who lost her job at The Guardian for holding the above position), I would defend hard-won feminist liberties from others who have decided that they’re women, but who just don’t qualify. What about transgender people in women’s prisons, toilets and other female-only safe spaces, eh?

My Christmastime interlocutor is an authentic feminist. For her, Rowling and Moore are beyond old hat, their wars being won long ago, they can be consigned to fond history. The only way to consolidate earlier feminist victories is to move on to the final equality triumph of gender abolition – the only route to absolute equality.

It strikes me that she may have theology on her side. Paul the Apostle writes in his letter to the Galatians that the new covenant means: “There is neither Jew nor Gentile, neither slave nor free, nor is there male and female, for you are all one in Christ Jesus.” (Galatians 3:28). If there is no male and female in the Christ, then the Church is currently falsely demarcating gender in its canon law.

It’s of limitless value to me to recognise where advocates of same-sex marriage are coming from on this. By the same token, those advocates may be obliged similarly to consider the validity of the case of their opponents.

In the Catholic tradition, the theology of creation is at the heart of human gender. From the book of Genesis to the miracle of the incarnation of the Christ, the divine is made visible in the world through the conjugality of male and female. To abolish them is to desecrate God’s purposes in the created order.

It’s as well to understand this, too, because it serves to take the arguments of what are often dismissively called “traditionalists” away from over-simplistic accusations of misogyny. The Catholic understanding of priesthood is that it reflects God’s creation through God the Father, enabled by the Queen of Heaven to give us the incarnate Son.

If one removes the difference between two objectively defined things, they obviously become the same

We may argue – and I do – that there is nothing in scripture or theology to deny women’s priesthood. Indeed, there is a whole weight of scripture and theology to commend it (the Magdalene’s apostolic mission as first witness to the resurrection anyone?) But we’re helping no one on the road to gender equality to pretend that Catholics are just interested in maintaining a privileged boys’ club.

The same premise militates against same-sex marriage in church. It’s held as a microcosm of the conjugality at the very centre of the miracle of human creation. You can pretend that it’s a cruel, exclusive and discriminatory institution aimed at a patriarchal societal control, but that’s also a gross misrepresentation.

A clash of cultures

Which leaves us where we are at the moment. A classic piece of Anglican compromise is the idea that marriage in church remains between one man and one woman, while recognising that same-sex unions should and must be blessed and celebrated.

But it’s as well, too, to recognise where we are in the clash of two monumentally important and genuinely held mindsets over gender. And that we’ll get nowhere very helpful simply by campaigning to get one side to defeat the other.

We should also recognise what’s at stake. The end of history has already been called prematurely in the economic development of humankind. If we don’t strive, together, to understand human gender as well as we can, what’s at stake could be the end of theology.