Why should parishioners receive communion from female clergy when their bishop won’t?

There are still many unanswered questions in the appointment of the CofE’s first diocesan bishop who does not ordain women, says Martine Oborne. What message does it send to female clergy? And how can they be expected to flourish in an environment where institutionalised discrimination still exists? 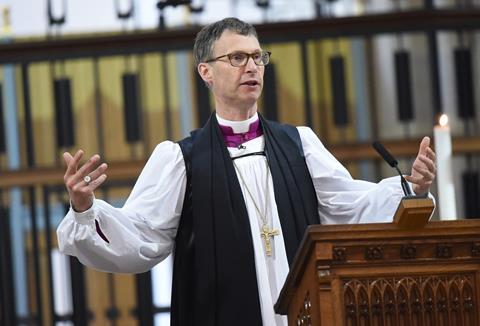 A week before the announcement that Rt Rev Philip North had been nominated as the next Bishop of Blackburn, Women and the Church (WATCH), a national campaign group for gender equality in the Church of England, issued a statement. In it, we explained that we could not support the appointment of a diocesan bishop who does not ordain women.

As Chair of WATCH, I want to be clear that our opposition to this nomination is not at all personal; we would oppose the appointment of anyone who does not ordain women - and is unclear whether the Church of England should ordain women - to this post.

Why should my parishioners receive communion from me when my own bishop won’t?

Bishop Philip will be the first person holding this view to become a diocesan bishop since women were, themselves, permitted to hold the role. And there are many questions about the appointment that still remain unanswered.

In 2014, provisions were made for parishes who could not accept oversight from a female diocesan bishop, or a male bishop who ordains female clergy. Such parishes can, instead, request a suffragan bishop. But there are no reciprocal arrangements in place; a parish with a bishop who does not ordain female clergy cannot request oversight from one who does.

In his role, Bishop Philip will have authority over the priestly ministries of all his clergy. An important part of this role is to ordain clergy as priests. So what happens when a bishop can only ordain some clergy, because he does not ordain women, or men who fully recognise the ordination of women?

In the case of Bishop Philip, we still don’t know the answer to this question. Will he ordain some clergy and not others, or will he not ordain anyone at all? Will Blackburn need another suffragan bishop to ordain those who Philip will not?

One female priest said to me recently: “As a woman, I would feel significantly undermined in my ministry if the reason my diocesan bishop chose not to ordain me was because he was not sure if I should be a priest at all - and not sure if his own orders would be undermined if he did ordain me.”

A so-called non-ordaining bishop is also not in full communion with all the clergy in his diocese. For those not familiar with CofE language, that means he would not receive communion from a female priest, as he is not sure of the ‘efficacy of the sacrament’ that she consecrates.

For me personally, this would be very concerning. To have my boss be unsure that the bread and wine I consecrate is quite the real deal is incredibly undermining and, frankly, an insult to my parishioners. Why should they receive communion from me when my own bishop won’t?

Other concerns include the secrecy that surrounds the views of non-ordaining bishops.

The nomination of Bishop Philip was announced in a school in. No one explained to the children present that their new bishop would happily confirm them all but, if God called any of the girls present into ordained ministry, he does not believe that the Church has the authority to ordain them.

Schools work very hard to affirm all the children in their care - what message would it give to the girls to know this?

In cases such as this, it’s incredibly difficult to separate the personal and the principle. This is not an attack on Bishop Philip, but an argument that no one should be appointed as a diocesan bishop if they don’t fully accept that the Church ordains women and is right to do this.

Will Bishop Philip ordain some clergy and not others, or will he not ordain anyone at all?

Opening the door for a traditionalist Anglo-Catholic diocesan bishop who does not ordain women and does not believe the Church has the authority to do so is a slippery slope. What comes next? A conservative evangelical diocesan bishop, who doesn’t accept women as vicars or bishops at all because of the way they interpret scripture?

The Church now ordain female clergy to all orders. But it also continues to ordain men who don’t fully accept their ministries, or who limit those ministries in different ways.

It’s hard to see how this can continue. In 2021, Dr Gabrielle Thomas published For the Good of the Church: Unity, theology and women (SCM Press). In the book, she included many stories detailing how Anglican women struggle to flourish when their identities as priests are not fully recognised.

Most disturbing of all, they say there is no safe space in the Church to report their experiences of discrimination and sexism, and how these experiences feel far from the “mutual flourishing” promised to them.

Thomas concludes that mutual flourishing in the Church is sadly an “open wound”. But, despite all this evidence, the Church is still unwilling to recognise that all women might not be able to flourish in an environment that has institutionalised discrimination.

Establishing equality for women in the Church would upset many, of course, and no one wants to see people leave. But the Church is called to reflect the image of God, an image that is both male and female, and we will not reflect this well until we have full equality.

A step forward would be to say “no” to diocesan bishops who do not fully accept the priestly ministry of women, or their calling as church leaders.

Martine OborneRev Martine Oborne is a vicar in west London and chair of Watch (Women and the Church), a group that works for equality for women in the Church of England