The appointment of Rt Rev Philip North as Bishop of Blackburn was not universally welcomed last week, with some expressing concern that Bishop North doesn’t ordain female priests. But Rt Rev Jill Duff, who oversaw the consultation on his appointment, explains why, as a woman, she’s excited to work with him 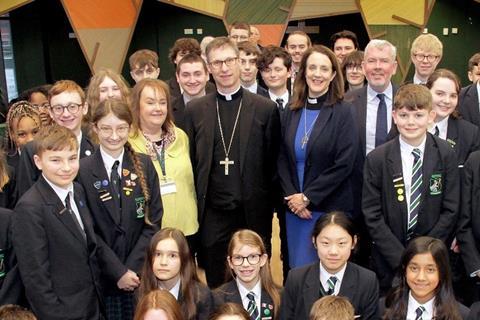 The announcement of a new bishop marks an important milestone in the life of a Diocese. Last week, we announced a new Bishop of Blackburn, our very own Rt Rev Philip North, Bishop of Burnley.

I was thrilled and relieved when I first heard the news in private. Then, in public, it was beautiful to see the joy as the announcement was made: easy chatting with pupils at St Christopher’s High School who realised he was the same bishop who had confirmed them; the standing ovation of church and community leaders which greeted him at Blackburn Cathedral.

This was followed by a flurry of joy-filled emails and messages, including one of my favourites, a specially-recorded ditty by the choir of Morecambe Parish Church because they were “chuffed to pieces” with his appointment.

Philip has been serving as a suffragan (or assistant) bishop, like me, for the last eight years. As Bishop of Lancaster, it has brought me great joy to work with him closely for the last five of these. He is a prophetic leader and tender-hearted pastor who loves Jesus and loves the county he works in.

In Philip’s own words, he has three priorities. He is “committed to continuing the growth of the church”. He longs “to see the Church of England in Lancashire being an ever-stronger voice for justice, especially for the poorest”, and he believes “that children and young people need to be at the heart of all we do”.

But as with any senior appointment, not everyone is in agreement.

The Guardian put it most starkly: “Why are female clergy cheering for a bishop who doesn’t believe in women priests?”

So am I mad? Just towing a corporate line? Or worse?

In her seminal feminist manifesto, Killing the Angel in the House, Virginia Woolf described a passively meek woman who was conditioned to sit in the draught, silencing her own needs for the sake of the men. Am I being an Angel in the House of Bishops?

I have spent all my working life in industries predominantly led by men – scientific research, universities, the oil industry and then the CofE. All my bosses, bar one, have been male.

He has genuinely enabled me to flourish and delights in seeing me exceed him. He’s encouraged me, trusted me and helped me find my voice. And it is not just my experience. During his time in Lancashire, he’s sponsored equal numbers of women and men for ordination. He genuinely delights in the ministry of women and wrote on the day of his announcement: “Female clergy in Blackburn diocese are fully and equally part of the Diocese and have a ministry that is grace-filled and transformative.”

Yes, there is sexism and misogyny still to be found in the CofE. But rather than pick off easy targets, I would love us to work together in tackling the more systemic issues.

As Sir Philip Mawer’s report into Philip’s withdrawal from nomination as Bishop of Sheffield put it: “There is, frankly, no merit, if those of differing convictions in the Church are to continue to live together, in anybody searching for scapegoats.”

When I read Martine Oborne’s statement from Women and the Church (WATCH) in the days before our announcement, I felt the raw pain of her “Stepney orphan experience” in 2010. I am sorry that this was her experience at such a seminal moment in her vocational journey.

On the 25th anniversary of the ordination of women in 2019, as a bishop in the Diocese, I apologised for the way we have treated women, especially our original cohort. There is absolutely more work to do.

We know that some will find this appointment difficult, so open channels of conversation have been offered - and there are a few taking up this opportunity. We want to hear everyone’s voices and experiences.

But the overwhelming majority of women priests in Lancashire are enthusiastic about Philip’s appointment. One said to me last night: “I wish those who criticise us in the press would come and listen to our voices and hear our personal experience. I wish they could meet Philip, too.”

In every generation over the last 500 years, the CofE appears to be about to fall apart. With debates over the response to Living in Love and Faith on the horizon this month, it is ever thus.

Despite this, Rev Anne Beverley, our dean of women’s ministry, summed up why Philip’s appointment is good news for the gospel: “One of the reasons there’s so much support for Philip is he models what disagreeing well looks like.”

Jill DuffRt Rev Jill Duff is the Bishop of Lancaster